ONE MAN is dead and five are injured in the second major construction accident in nine months on the same stretch of the cross-country D1 highway in eastern Slovakia. 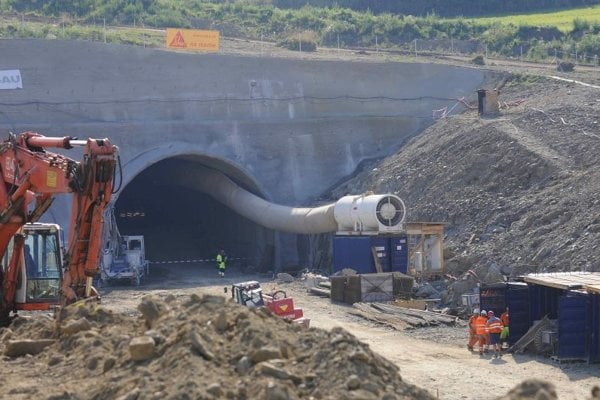 ONE MAN is dead and five are injured in the second major construction accident in nine months on the same stretch of the cross-country D1 highway in eastern Slovakia.

The latest August 12 incident occurred in the Šibenik tunnel near Spišský Hrhov, in Levoča district, shortly after half past four in the morning. An uncontrolled blast of explosives resulted in the death of a 39-year-old man. It is the second fatal accident in less than a year on a stretch of highway between Jánovce and Jablonov. Last November, a highway bridge under construction between the villages Kurimany and Iliašovce collapsed, killing four and injuring 12.

A preliminary investigation by the police and the District Mining Authority in Spišská Nová Ves found there were two planned blasts in the tunnel, during which not all explosives blew up. When the explosives manager, 39-year-old Rastislav Mihálik, and another five men went to check the site, the uncontrolled explosion occurred, causing a landslide, the Sme daily wrote.

“It was either human failure or the material they worked with had some technical problems,” said Interior Minister Robert Kaliňák, as quoted by the Pravda daily, when describing the two theories from which police are now working. Police are also pursuing the investigation with the intention to recommend prosecution charges, the SITA newswire reported.

The construction work on the whole stretch between Jánovce and Jablonov is being done by a consortium of private construction firms, Eurovia SK, Eurovia CS and Stavby Mostov Slovakia. The deceased man and the injured workers were employees of the companies’ subcontractors, the TASR newswire wrote.

Meanwhile, the District Mining Office in Spišská Nová Vec has cleared the resumption of work on the Šibenik tunnel. It was resumed on the same day the explosion occurred, PR manager of Eurovia SK Simona Tančáková told The Slovak Spectator.

The workers first removed all remains of explosives and debris from the southern tunnel tube, and then continued in the planned construction works, Marcel Jánošík, spokesperson for the National Highway Company (NDS) told The Slovak Spectator. Both Tančáková and Jánošík said that the accident did not affect work elsewhere on other building structures.

As it is the second accident that occurred on the Jánovce-Jablonov stretch in a short period of time, several media outlets have asked Transport Minister Ján Počiatek whether he will resign from the post. The minister said he would do so if the investigation “proves I failed somewhere”, as reported by SITA.

Immediately after the explosion, the injured workers were transported to nearby hospitals in Levoča, Spišská Nová Ves and Poprad. One victim with head injuries had to be transported to Košice where he underwent surgery and remains in an induced coma. There is no need for further medical procedures, Ladislava Šustová, spokesperson for the University Hospital of Louis Pasteur in Košice, told SITA.

Another worker hospitalised in Levoča is now stabilised and gradually improving. He will have to undergo another surgery, but in another hospital, spokesperson for AGEL group, which operates the hospital, Hana Szotkowská told TASR. She did not specify where that surgery would take place.

The three additional injured men are recovering without serious complications, according to officials. One man was released from the hospital on August 12, Sme reported.

When asked about the possible compensation of the victims and their families, Transport Ministry spokesperson Martin Kóňa told The Slovak Spectator that it is too early to answer the question. Yet, he added that the representatives of the private companies, under whose control the construction works were, seemed open to the idea.

The police are also investigating last year’s highway bridge collapse between Kurimany and Iliašovce. The initial findings by investigators suggested that the collapse was caused by insufficient support.

The investigators are waiting for the expert opinion over the course of construction prepared by the Institute of Forensic Engineering at Žilina University. It is likely the institute will provide the document to police in September, said researcher of the institute Ivan Drevený, adding that “the submitted expert opinion will have a major impact on the decision of investigator or prosecutor over laying the charges”, as reported by SITA.

Drevený declined to comment on the causes of the collapse, saying the investigation is still underway.

The accident led to debate over the effects of taking the lowest cost bid on construction projects and the effect on quality. The collapsed bridge was supposed to be part of the cross-country D1 highway section between Jánovce and Jablonov that is being constructed by a two company consortium comprised of Váhostav-SK and the Czech firm Bögl & Krýsl.

The section includes five bridges, with the collapsed bridge being the only one built in cooperation with a subcontractor, the Slovak company Semos. The collapsed frame was supplied by German-owned firm Skruže Weise.

Construction on the bridge resumed in April, with the NDS replacing the original type of frame, SITA wrote.