LAST July, the photo of an old man opening his front door wearing only his underwear, published by British tabloid daily The Sun, attracted widespread media attention. The daily’s journalists had tracked down László Csatáry, listed by the Simon Wiesenthal Center as the world’s most-wanted surviving Nazi war criminal. Hungarian and Slovak authorities subsequently re-opened the prosecutions against the former police officer for his war crimes. 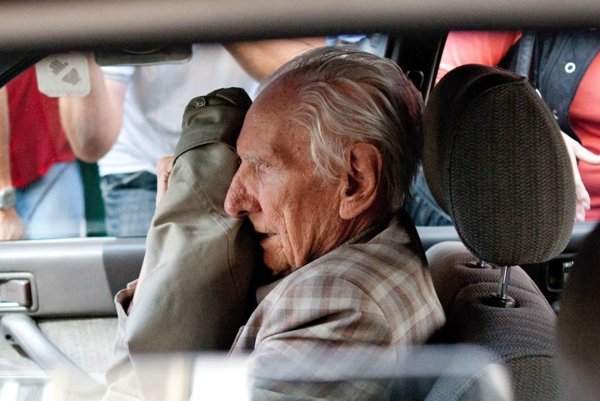 LAST July, the photo of an old man opening his front door wearing only his underwear, published by British tabloid daily The Sun, attracted widespread media attention. The daily’s journalists had tracked down László Csatáry, listed by the Simon Wiesenthal Center as the world’s most-wanted surviving Nazi war criminal. Hungarian and Slovak authorities subsequently re-opened the prosecutions against the former police officer for his war crimes.

Yet, the prosecution will now come to an end as Csatáry has died at the age of 98 in a hospital in Budapest, Hungary, succumbing to pneumonia, media outlets reported on August 12.

Csatáry served as a commander in the Košice Jewish ghetto during the Second World War, and was suspected of assisting in the murder of as many as 15,700 Jews who were deported from Košice – then under Hungarian occupation, and known as Kassa – to concentration camps.

His death has prompted mixed responses. The Simon Wiesenthal Center issued an official statement in which it expressed “deep disappointment” over Csatáry’s death.

“It is a shame that Csatáry, a convicted (in Czechoslovakia in 1948) and totally unrepentant Holocaust perpetrator who was finally indicted in his homeland for his crimes, ultimately eluded justice and punishment at the very last minute,” said Efraim Zuroff, a director of the Simon Wiesenthal Center office in Jerusalem, as quoted in the official statement.

Yet, Pavol Mešťan from the Museum of Jewish Culture in Bratislava said that whether or not the war criminal heard the verdict is not important.

“We are not looking for revenge,” Mešťan told the Sme daily. “For us it is more important that with the detention of Csatáry [and] the issue of the Holocaust, whose constructors and contractors were people of flesh and blood, [is] re-opened.”

Csatáry was born in 1915 in the Hungarian village of Mány, near Budapest. During WWII he served as a senior police official in Kassa, which was for most of the war under the control of Nazi-allied Hungary, following its annexation from Czechoslovakia in 1938, from where he organised the deportations of approximately 300 Jews to their deaths in Kamyanets-Podilsky, in present-day Ukraine, in 1941, and another 15,700 Jews to the Auschwitz extermination camp in German-occupied Poland.

Though he escaped after the war, he was tried in absentia in 1948 in Košice, which had by then been returned to Czechoslovakia. Several victims described Csatáry as a cruel sadist who enjoyed torturing Jews and pro-democratic inhabitants of Košice who criticised the Nazi regime, Košický Večer, a supplement to the Korzár daily, wrote back in July 2012.

In addition, Csatáry was blamed for the deaths of several Košice residents who were shot shortly before the town was liberated by the Soviet Red Army.

Csatáry was convicted of war crimes and sentenced to death and confiscation of his personal property. The senate of the Košice Regional Court changed the original verdict to life imprisonment on January 31, 2013, the SITA newswire wrote.

After the war, Csatáry spent more than 50 years in Canada under an assumed identity, where he worked as an art dealer. However, authorities there discovered his true identity in 1995 and launched an investigation, during which they visited Slovakia’s archives in order to search for the relevant documentation. In 1997 Csatáry fled Canada and moved to Hungary, where he hid successfully for 15 years.

Hungarian authorities detained Csatáry on July 18, 2012, after British journalists tracked him down in a flat in an upmarket district of Budapest. Subsequently, the Buda Central District Court of Justice placed him under house arrest, the TASR newswire reported back in July 2012.

Before Csatáry’s pictures were published in The Sun, it was the Simon Wiesenthal Center that first informed the Hungarian authorities of his address in September 2011, after receiving an anonymous tip-off for which they reportedly paid $25,000. He was found within the campaign to bring remaining Nazi war criminals to justice by offering financial rewards for information leading to their arrest and conviction, known as Operation Last Chance, which was launched in July 2002, according to the campaign’s official website.

After the detention, Slovak authorities called on Hungary to extradite Csatáry, with Slovak Justice Minister Tomáš Borec saying he should spend his punishment in Slovakia, and not in Hungary. After the Justice Ministry received the file from Csatáry’s investigation and the ruling, it ordered the district court in Košice to send a request for extradition to Hungary, as reported by SITA.

Yet, Hungarian authorities also sought Csatáry’s prosecution by local courts. Hungarian internet portal Hvg.hu wrote in August 2012 that the former police officer was sentenced to 20 years in prison by the local courts back in 1945, in absentia, SITA reported.

The country’s Prosecutor’s Office charged Csatáry in mid June 2013 with war crimes dating back to WWII, saying he is accused of “illegal executions and torturing people, which he committed partially as a perpetrator and partially as an accomplice”, Sme quoted Bettina Bagoly, a spokesperson of the Budapest Prosecutor’s Office, as saying. The proceeding should have started at the end of September, TASR reported.

Csatáry denied his guilt, saying that he was working for the Nazis only as a translator, TASR wrote.

Both countries will now have to stop the proceedings. Košice Regional Court spokesperson Marcela Gálová told SITA they will halt the proceeding, but only after receiving Csatáry’s death certificate.

The court was to decide where Csatáry will spend his life imprisonment on September 26, as reported by SITA.