THOUGH still declaring the ambition to keep the budget deficit under the European Union’s 3-percent redline, Slovakia’s Finance Ministry is to abandon an earlier plan to keep the deficit at 2.6 percent of the gross domestic product in 2014 and settle for 2.9 percent instead. 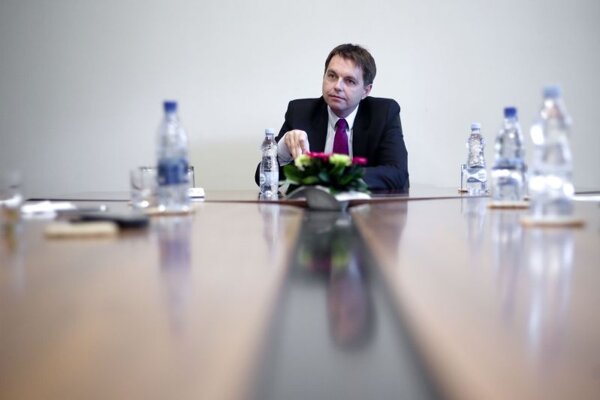 THOUGH still declaring the ambition to keep the budget deficit under the European Union’s 3-percent redline, Slovakia’s Finance Ministry is to abandon an earlier plan to keep the deficit at 2.6 percent of the gross domestic product in 2014 and settle for 2.9 percent instead.

In this first version of the draft state budget for next year, the government nevertheless argues that the eased plan is in line with the European Commission’s recent warning that overly strict consolidation might harm economic growth. It also argues that Slovakia meets the EC’s conditions for such modification in the consolidation efforts. The ministry assumes revenues of €13.223 billion and spending at €16.876 billion, with the deficit being at €3.653 billion, according to the TASR newswire.

The state might not manage to push this year’s deficit under 3 percent of GDP, with Prime Minister Robert Fico’s government claiming that it will not end up far from the projected 2.9 percent.

“Today we estimate that the state is running with a deficit at the level of 3.04 percent of GDP, while the key risk remains beyond the state on the shoulders of the local governments,” Kažimír said, as quoted by TASR. “We have two months ahead to manage this situation since our international commitment is at stake.”

The lower than expected collection of tax income left a hole worth €651.2 million and has contributed to the higher than anticipated deficit, which can be partly compensated for by reserves gained from opening up the second pension pillar at €229.1 million and also by positive developments in the sale of emergency oil and oil product reserves worth €380 million, TASR wrote.

Kažimír said that Slovakia wants to correct the excess deficit and preserve credibility in financial markets. However, Slovakia’s way out of the excess deficit may be complicated by municipalities as the Finance Ministry said that there are negative developments in their fiscal performance, which might result in an increase of their deficit by another 0.2 percent of GDP, the SITA newswire reported.

European countries are free to ease their fiscal consolidation plans if their economy is performing deeply under its potential, their deficit is not higher than 3 percent of GDP and public debt rules are being observed, among other conditions.

Still, the modified budget plan is calling for new spending, which will need to be compensated for with additional austerity. Without such measures the deficit next year might climb as high as 3.8 percent and in 2015 even higher, almost 4 percent of GDP. The first budget draft does not yet include these further austerity measures, according to SITA.

The government, in order to reach the deficit target, has to come up with consolidation measures worth €700 million for 2014, about €1.1 billion for 2015 and some €1.5 billion for 2016. The government assumes the largest part of the cuts this year, almost €415 million, can be covered by making the operation of the public administration more effective, SITA reported.

The Finance Ministry expects to gain an extra €150 million by making tax collection more effective, with an extra €8 million garnered by freezing the salaries of constitutional representatives.

The finance minister promised that the state would carry the main share of savings on its own shoulders.

“It means the state will deliver more than €400 million through better management. It will be a combination of cutting expenses and increasing incomes within the valid legislation. It means no hiking of fees or new taxes,” Kažimír said, as quoted by TASR.

Based on the draft, the biggest bites from the budget cake in 2014 are planned to go to the Transport Ministry at €2.15 billion, the Ministry of Labour and Social Affairs at €2.08 billion and the Interior Ministry €1.86 billion, TASR reported. Institutions with the lowest budgets will be the Anti-Monopoly Office with €2.09 million, followed by the Office for the Regulation of Network Industries with €2.66 million. The Parliamentary Office is to receive €23.46 million, the Government Office €24.07 million and the Presidential Office €4.01 million. The Slovak Intelligence Service (SIS) will claim €43.27 million and the Slovak Academy of Sciences (SAV) €60.35 million, according to TASR.