THE FIFTH year of the Gypsy Bashavel, which takes place in August at the Červený Kameň Castle near Bratislava, will return after last year’s daring journey, which explored a variety of musical fusions, to the roots of traditional Roma art. 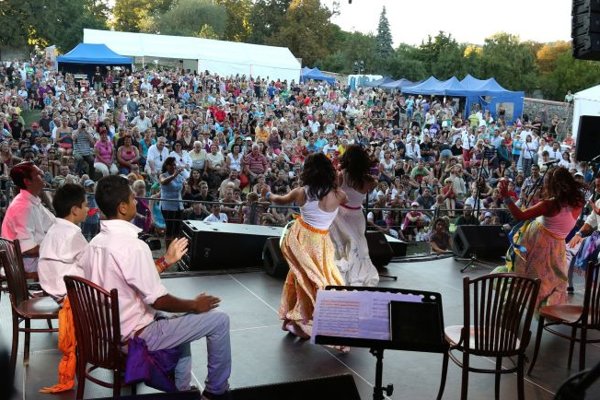 THE FIFTH year of the Gypsy Bashavel, which takes place in August at the Červený Kameň Castle near Bratislava, will return after last year’s daring journey, which explored a variety of musical fusions, to the roots of traditional Roma art.

“We want to make the 2013 festival a family occasion,” Vladimíra Dohnalová, head of the Divé Maky civic association that organises the festival, said. “Thus, there will be a lot of workshops where not only children can try and do a lot of things themselves.”

In addition to presenting Roma culture to the wider public, the Bashavel (which in Roma means feast) provides a platform for young Roma talents who study and train in the Divé Maky (Wild Poppies) programme. The programme picks young Roma who excel in music, dance, fine arts, theatre and sports, and supports them throughout the school year, as well as during a summer “academy”, an intensive workshop that prepares a selection of them to perform at the Bashavel, alongside experienced professional performers. This year, the academy features professionals like Gabika Binderová (visual art), Laco Cmorej (dance), Barbora Botošová (musician), Naďa Uherová and František Balogh (theatre), who helped young Roma to focus on their talents and demonstrate them in the culmination of year-round work, the Bashavel.

Music and dance form the core of the one-day festival, but in 2013, fortune-telling with “Gypsy” cards, traditional Roma cuisine, a theatrical performance by Divadlo DIK (a small group from Čičava in eastern Slovakia) and presentation of Roma crafts (with a workshop for making wooden household tools, again from Čičava) will round out the event. There will also be a fine-art workshop, a tea-room with numerous varieties of tea and a new event outlining the potential direction of the Gypsy Bashavel: the Children’s Corner, with a historical carrousel, period toys and various activities for children.

The performers, on two stages, include children from the Divé Maky project and Slovak groupings Gipsy Nicol, Gipsy Čáve, Bohémiens of Barborka Botošová, and Bartošovci, as well as foreign guests: Mário Bihári and Bachtale Apsa from the Czech Republic, Flare Beas and Parno Graszt from Hungary, Romafest from Romania and the international Gypsy Bashavel project, formed specifically for this year’s festival.

“This year, we would like to inspire visitors to come clad in thematic clothes, too,” the Wild Divé Maky’s representative told the press conference. “Women in colourful wide-cut skirts, men in flared shirts with puffy sleeves – that is our idea…”

But whether in stylish clothes or not, it is worth popping up at the Gypsy Bashavel on August 29 between 11:00 and 23:00 to get a taste of the roots of Roma culture. More detailed information can be found at www.ciganskybasavel.sk. and www.divemaky.sk.

“The main idea of the festival is to create a stage for Roma artists, both amateur and professional, to show their skills, the music they make and to support Roma culture, which is really colourful and vivid,” Dohnalová summed up, adding that the motto of this year’s festival is ‘Back to the Roots!’.