THE EXPLORATION of the original ventilation ducts in Žilina’s New Synagogue by local speleologists will help with the reconstruction of the national cultural monument. 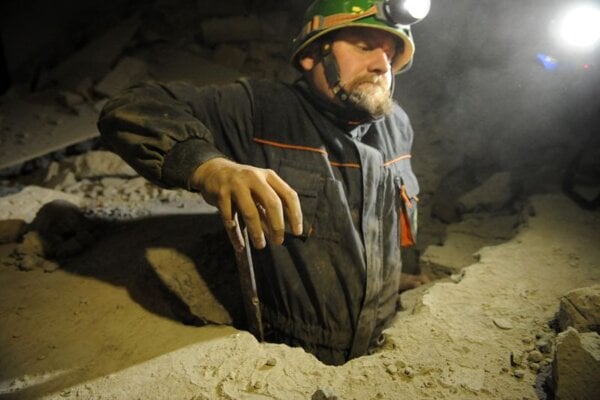 THE EXPLORATION of the original ventilation ducts in Žilina’s New Synagogue by local speleologists will help with the reconstruction of the national cultural monument.

Róbert Blaško of the Truc Sphérique civic association, which is overseeing the reconstruction, told the TASR newswire at the end of July that the heating and ventilation system was placed in hollow shafts in the walls which were walled over during later renovations, and which now contain years of debris.

“We first tried to [search the air ducts] with top technology: we had here robots, but they failed to get in, due to the debris,” Blaško said. “They also failed to make it to the vertical walls. So we invited speleologists who are able to do the dangerous job, and they measured the precise state and were able to clean the inspection chambers.”

Head of the Žilina Club of Speleologists, Tibor Pajtina, admitted that they had never done a job like this.

“But as we consider new things that we have not done yet to be thrilling, we decided to help them measure and clean these spaces. Caves are colder in such weather, but here, it is very hot and dusty, and so it is a bit more demanding,” he concluded.

Baško explained that the New Synagogue’s reconstruction is entering its second phase and after two years of historical and restoration research, and with the original blueprint documents of architect Peter Behrens having been located, and after all non-original construction elements have been removed, work is going forward at full speed. In July, restoration experts from Poland and Slovakia worked on the cupola for two weeks, removing a layer of paint. Also, five students from Lodz, Poland came to help, Blaško said.

He added that although so far no big sponsors have been found to help finance the reconstruction, help has come from several smaller companies and foundations, as well as the Culture Ministry, the town of Žilina, cross-border programmes of the European Union, individual donors and volunteers, like the speleologists.