ON JULY 23, nine Stolperstein memorial tiles were placed in Prešov in a ceremony attended by the family members of Holocaust victims and city representatives. 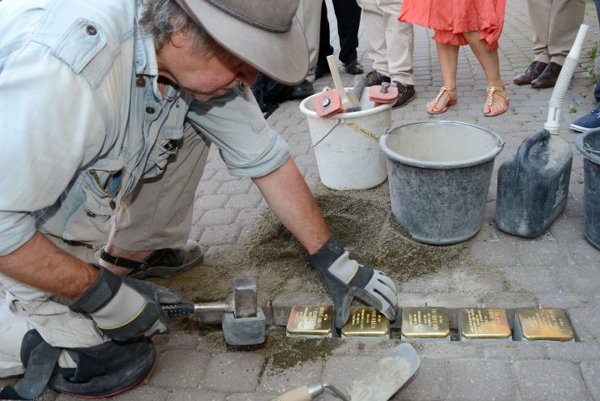 ON JULY 23, nine Stolperstein memorial tiles were placed in Prešov in a ceremony attended by the family members of Holocaust victims and city representatives.

Stolperstein means, both literally and symbolically, stumbling block. German artist Gunter Demnig came up with the idea of the memorial tiles in 1993, and in 1995, the first Stolpersteins were placed in pavements in Berlin, the SITA newswire wrote.

“This international project commemorates the murdered Jews, Roma, homosexuals, unionists, physically handicapped and Jehova’s Witnesses,” one of the Holocaust victims’ relatives at the ceremony in Prešov, Juraj Križáni, told SITA. The location of the tile in front of the house of the deceased symbolically connects the person or the family that lived in the house with the modern city.

“As there are only a few of these memorial tiles in Slovakia, I am very happy that here, in Prešov, this event is taking place,” said Ivan Pasternák, another relative of Holocaust victims. “The names of our relatives are written in such a small script that anyone who wants to read them has to bow, thus showing respect to the memory of those who were deported to Auschwitz and of whom we still don’t know when or how they died.”

When the first of Demnig’s tiles were laid in 1995 in Germany, they were done so without permission from the relevant authorities. Later, he received approval and over the years, the memorial tiles spread across German and other European cities.

Currently, there are more than 25,000 Stolpersteins in hundreds of cities, almost all in countries that experienced the Holocaust. In the Czech Republic, there are more than 300 such tiles, while in Slovakia some have been placed in Brezno, Banská Bystrica, Prešov and in the small town of Halič near Lučenec, where five were set into the pavement in front of the house where the Šternlicht family used to live. Six of its members were taken to concentration camps, but only one of them returned.

“A female relative of the family, currently living in Germany, addressed us,” Halič’s mayor Vladimír Rehánek told the TASR newswire. “We were happy about this initiative, as this family was truly a part of our municipality. Only a single family member survived the war, out of a total of six [who were] deported. Everyone who now comes to Halič can learn from the metal plate on the pavement that this family used to live here,” he concluded.

In Komárno, two Stolpersteine were set into the pavement on July 26: one in front of the house at 9, Eötvös Street, and one on Komenského Street, in front of the elementary school.