THE FINANCE Ministry’s first draft budget for 2014 is making several departments edgy about the prospect of getting a thinner slice of the pie, as Prime Minister Robert Fico tried to ease worries by saying that the state may yet get more generous toward some departments. Though still declaring the ambition to keep the budget deficit under the European Union’s 3-percent-redline, the Ministry of Finance is to abandon an earlier plan for a 2.4 percent deficit and settle for 2.9 percent instead. 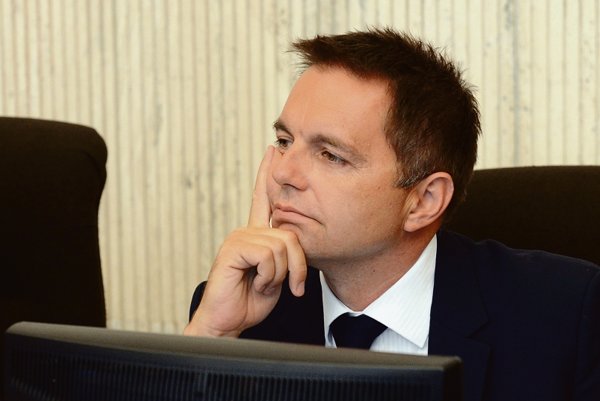 THE FINANCE Ministry’s first draft budget for 2014 is making several departments edgy about the prospect of getting a thinner slice of the pie, as Prime Minister Robert Fico tried to ease worries by saying that the state may yet get more generous toward some departments. Though still declaring the ambition to keep the budget deficit under the European Union’s 3-percent-redline, the Ministry of Finance is to abandon an earlier plan for a 2.4 percent deficit and settle for 2.9 percent instead.

Opposition parties have slammed the draft and said that the government is abandoning the necessary consolidation of public finances. The government meanwhile argues that the slightly higher deficits falls in line with European Commission’s recent warning that overly strict consolidation might harm economic growth. It also argues that Slovakia meets the EC’s conditions for such modification in the consolidation efforts. The ministry estimates revenues of €13.223 billion in the coming year and spending at €16.876 billion, with a deficit of €3.653 billion, according to the TASR newswire.

Based on the draft, the biggest bites from the budget pie in 2014 go to the Transport Ministry at €2.15 billion, the Ministry of Labour, Social Affairs and Family at €2.08 billion and the Interior Ministry €1.86 billion, TASR reported. Institutions with the lowest budgets will be the Anti-Monopoly Office with €2.09 million, followed by the Office for the Regulation of Network Industries with €2.66 million. The Parliamentary Office is to receive €23.46 million, the Government Office €24.07 million and the Presidential Office €4.01 million. The Slovak Intelligence Service (SIS) will claim €43.27 million and the Slovak Academy of Sciences (SAV) €60.35 million, according to TASR.

Some departments may yet receive more money than what is proposed in the Finance Ministry draft, Fico said on August 21, at a meeting of senior members of the Confederation of Trade Unions.

“I understand that the first draft, submitted by the finance minister, might have evoked doubts and even skepticism,” Fico said, as quoted by the SITA newswire in reference to some departments, which have seen their budgets trimmed compared to 2013.

For example, the SAV reported that if the government sticks to its draft budget and insists that the institution trims its budget by €11 million, the SAV might have to lay off as many as 600 people. Senior officials of the academy suggested that the drawing of European Union funding might be endangered as well, the Sme daily reported.

Fico responded on August 21 that the institution’s budget for next year is built on the most pessimistic economic forecasts.

“If we see that economic growth has a different quality from what we had originally expected, then we would also make interventions into the budget,” Fico said, adding that he believes that the result will be very similar to this year’s budget when some institutions received more funds than originally planned.

The state might not manage to push this year’s deficit under 3 percent of GDP, with the government claiming that it will not end up far from the projected 2.9 percent.

“Today we estimate that the state is running with a deficit at the level of 3.04 percent of GDP, while the key risk remains beyond the state on the shoulders of the local governments,” Kažimír said, as quoted by TASR. “We have two months ahead to manage this situation since our international commitment is at stake.”

The lower than expected collection of tax income left a hole worth €651.2 million and has contributed to the higher than anticipated deficit, which can be partly compensated for by reserves gained from opening up the second pension pillar, and thus gaining €229.1 million along with positive developments in the sale of emergency oil and oil product reserves worth €380 million, TASR wrote.

Kažimír said that Slovakia wants to correct the excess deficit and preserve credibility in financial markets.

European countries are free to ease fiscal consolidation plans if their economy is performing deeply under its potential, their deficit is not higher than 3 percent of GDP and public debt rules are being observed, among other conditions. Yet, the deviation from the original plans must also be linked with national spending going into co-financing from EU funding for projects with a positive impact on the budget, according to SITA.

Radovan Ďurana, an analyst with the economic think-tank INESS, suggests “that the government caught the straw which the European Commission threw to the countries in the form of higher investment spending”.

“For Slovakia it however means an intention of higher drawing of EU funding, which exactly in the case of infra-structural projects do not have a good reputation,” Ďurana told The Slovak Spectator. “The inability to draw is being mixed with the permanently present corruption and cronyism. It is questionable whether the government would really draw these funds and thus the resulting deficit would be lower or that it would be possible to use this space to avoid cutting other expenses.”

Still, the modified budget plan is calling for new spending, which will need to be compensated for with additional austerity. Without such measures the deficit next year might climb as high as 3.8 percent and in 2015 even higher, to nearly 4 percent of GDP. The first budget draft does not yet include these further austerity measures.

The government, in order to reach the deficit target, has to come up with consolidation measures worth €700 million for 2014, about €1.1 billion for 2015 and some €1.5 billion for 2016. The government believes the largest part of the cuts this year, nearly €415 million, can be covered by making the operation of the public administration more effective, SITA reported.

As for whether the planned savings at €415 million through making the public administration more effective is realistic, Ďurana said that there is certainly such room in the spending, but the lack of previous action by the government bodes well for fulfilling this in 2014.

The Finance Ministry expects to gain an extra €150 million by making tax collection more effective, with an extra €8 million garnered by freezing the salaries of constitutional representatives.

“It means the state will deliver more than €400 million through better management. It will be a combination of cutting expenses and increasing incomes within the valid legislation. It means no hiking of fees or new taxes,” Kažimír said, as quoted by TASR.

Nevertheless, the analyst looks at the government’s prospects with scepticism.
“The government currently does not have measures through which it could achieve the target deficit; this is why the risk of non-standard and non-systemic measures emerges,” Ďurana said.

On the local level

However, Slovakia’s way out of excess deficit may be complicated by municipalities as the Finance Ministry said there are negative developments in their fiscal performance, which might result in an increase of their deficit by another 0.2 percent of GDP, SITA reported.

Approximately, 300 municipalities have problems with meeting their obligations stemming from a memorandum on financial stability that the Association of Towns and Villages of Slovakia (ZMOS) signed last October with the national government, Fico announced on August 21. Based on this memorandum, municipalities with inhabitants exceeding 2,000 should reduce their personnel expenses by 5 percent while they should save an additional 10 percent in their spending for goods and services and thus contribute to the country’s efforts to push the deficit under 3 percent of the GDP, SITA reported.

According to Fico, the negative development in budgets of local governments might inflate the public finance deficit by 0.2 percent of the GDP since the budgets of municipalities contribute a 14.4 percent share of the deficit. Fico expects the self-governments to save €137 million with ZMOS chairman Jozef Dvonč saying municipalities are having trouble securing such savings.

Yet Fico has warned the towns and villages that any municipality significantly deviating from the obligation will have the amount they failed to save this year deducted from their financing in 2014.
“I cannot quite imagine this,” said Dvonč. “I personally think that such step will not happen.”

The opposition weighs in

Ivan Štefanec, the deputy chairman of the Slovak Democratic and Christian Union (SDKÚ), said that the draft budget is yet more evidence that the government is unable to solve key problems of Slovakia, namely high unemployment, growing debt and high budget deficits, SITA reported.

While a year ago the government set a target unemployment rate 13.5 percent for 2014, it has since hiked this number to 14.2 percent, Štefanec said. One year ago it had expected debt at the level of 55.8 percent of the GDP, today it expects 56.9 percent, he said.

Christian Democratic Movement (KDH) chairman Ján Figeľ has commented that the government does not want to save through cutting its own expenses but has decided to push people deeper into debt, SITA reported.

“The Slovak debt was out of control under the first government of Robert Fico and his second government continues and wants to continue its increasing,” Figeľ said.