FÉLIX Valdés, who is an admirer of Slovak churches, is supportive of a project which looks into the possibility of extending the famed El Camino de Santiago pilgrimage walk into Slovakia. Spain’s ambassador also pointed to growing ties among university students and a future push for business collaboration. The Slovak Spectator spoke to Valdés about the challenges of combating his country’s high unemployment rate, Spain's draw as a pensioner paradise and the joys of the Mediterranean diet. 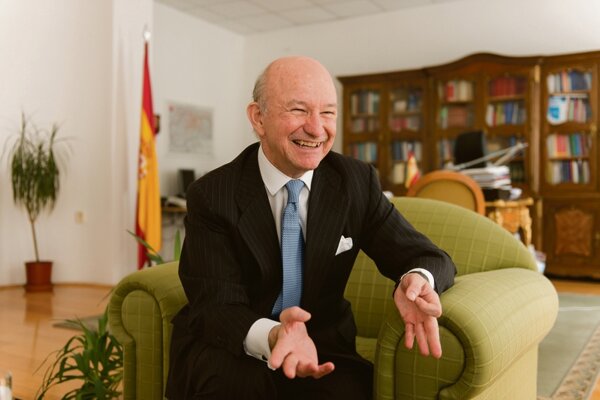 FÉLIX Valdés, who is an admirer of Slovak churches, is supportive of a project which looks into the possibility of extending the famed El Camino de Santiago pilgrimage walk into Slovakia. Spain’s ambassador also pointed to growing ties among university students and a future push for business collaboration. The Slovak Spectator spoke to Valdés about the challenges of combating his country’s high unemployment rate, Spain's draw as a pensioner paradise and the joys of the Mediterranean diet.

The Slovak Spectator (TSS): Spain’s official population dropped last year for the first time since records began, as reported by Reuters, with the drop attributed to the fall in the number of registered foreign residents. Is Spain less attractive now to foreign residents?
Félix Valdés (FV): The Spanish national statistics authority’s data suggests that of the population of more than 46 million people, there was a drop of 114,000 people, which is actually rather insignificant, 0.2 percent less than it was in January 1, 2012. There are still 5,118,000 foreign residents in Spain. In a free and dynamic society where it is rather easy to become a resident or also leave the country when the circumstances change, this is a normal trend. Also, of the 114,000 people who left, 20,000 or 30,000 are Spaniards who went abroad. For a society it is good to have this movement. Besides, the economic situation in the country is not as good as several years ago, and it is normal that people try to look for better options.

TSS: The IMF recently issued a rather gloomy outlook for Spain’s unemployment rate, suggesting that it would remain above 25 percent for the next five years. What are Spain’s biggest challenges on the labour market and what steps has your country taken to combat unemployment?
FV: Since 2007 we have seen a significant increase in unemployment. But the best unemployment rates we had in Spain were around 7-8 percent and thus there is always going to be structural unemployment and our jobless rate will always be higher than in some European countries. While in 2012, we saw our jobless rate climbing to 26 percent, in the last three months we saw a slight drop in unemployment, which might be related to the tourism season, so we will see in September if there is an improvement. Our government already last year launched several reforms, including fiscal consolidation and making the labour market more flexible.

There is even an agreement between businesses, trade unions and the government, which is indeed a shift since last year when there were two general strikes. Now the unions are rather moderate as they have understood that if the economy sinks, we all sink together: the right and the left, the employers as well as the employees. Our system is still rigid with expensive layoffs, which means that businesses are cautious with hiring new people. There is also a gray economy in Spain mainly in the tourism, service and construction sectors. Last year the state organised anti-fraud campaigns to track people who receive unemployment benefits but also are illegally employed.

TSS: Countries across the European Union are facing challenges linked to high youth jobless rates, especially in connection with the economic crisis. However, in Spain high jobless rates for people under the age of 25 are not only a recent phenomenon. What are the challenges your country faces in connection with addressing youth employment and the education system?
FV: It goes back to our rigid labour market where it is difficult to dismiss people and thus hiring a young work force is rather complicated.

But the government is planning to reform the education sector while also addressing the high drop-out rate from schools. The new system makes it possible for young people to transfer to professional training while receiving secondary education. This might also address the situation when too many young people are going to universities without proper skills.

TSS: Spain, along with Greece, Italy, and Morocco, shares a position on the “List of the Intangible Cultural Heritage of Humanity” with the Mediterranean diet. What is special about this diet?
FV: Over the past couple decades there has been a lot of discussion about the Mediterranean diet, while there are several scientific researches suggesting that this is a healthy diet composed of olive oil, olives, wines and fish. Spain is, for example, ranked second after Japan in fish consumption. As we are a coastal country, we eat fish two or three times per week. Our life expectancy is 85 for men and 86 for women, which is among the higher rates. Spain is also a big producer of olive oil and we consume it almost daily.

TSS: Are Slovaks familiar with Spanish cuisine?
FV: I don’t think so since there are not many Spanish restaurants here and Spanish cuisine is not as well-known here as in the United Kingdom or the United States. In fact, this year we have three of our restaurants ranked among the best 10 restaurants in the world, and this is something that we are very proud of.

TSS: Spain is still the most desired location of future pensioners interested in buying a holiday home for their retirement, followed by France and Italy. What challenges does this inflow of pensioners create for Spain?
FV: In 1996, there were 86,000 permanent foreign resident-pensioners in Spain and in 2011, this number reached 436,000. But there are also many others who live for several months in Spain and then go abroad. This is a very interesting phenomenon and in some Spanish cities almost half of the population is made of retired foreigners. One can find large pensioner groups, for example, from Great Britain and Germany, but also Nordic pensioners. This creates challenges in the health sector since the elderly need specific care, while in Spain health services are free of charge. Here the question is how to find an agreement within the EU that people who paid their taxes in one country could be taken care as pensioners in another country once they decide to move.

TSS: Where do you see room for Spain and Slovakia to expand their economic cooperation? What areas of the Slovak economy are of interest to Spanish businesses?
FV: There is still a lot of interest of Spanish businesses in Slovakia despite the complicated global economic situation. We are now assisting a starting business in Prešov, while there are several businesses which concluded contracts recently in the construction sector. At the end of this year, we will present the best potential business projects together with our Spanish Institute for Foreign Trade and will have an investment seminar on Slovakia and present the potential of the country while making contacts here.

TSS: Has the tourism potential between Spain and Slovakia been fully explored? How do Spaniards perceive Slovakia in terms of a holiday destination?
FV: The tourism potential is very difficult to assess. One of the problems is that there are no flight connections between Slovakia and Spain. There is only Ryanair flying to Malaga and Barcelona to transport people to Costa Brava and thus it is rather difficult to bring in people from Madrid or other parts of Spain to Bratislava and vice versa – bringing Slovaks to Spain. There are very few Slovaks travelling to Spain, but on the other hand we do not look into the tourists’ nationality but rather the place they are flying from. However, I see more and more Spaniards in Bratislava when I walk around. A couple years ago I did not meet any, but now I meet a Spaniard in the city almost every day.

TSS: Have you had time to travel around Slovakia? What has surprised you, either positively or negatively?
FV: The churches are beautiful here in Slovakia and I enjoyed the countryside very much. I have met one Spaniard here who is a tourist guide in Slovakia and Spain and he told me about his project of extending the El Camino de Santiago [pilgrimage walk] to Slovakia because now it is stretching almost to the borders of Austria. He told me that there are 15 churches of St James in Slovakia. He plans to do research and I will probably support this idea of having the El Camino de Santiago here. But it is only an idea at this point.

TSS: How do you assess the interest of Slovaks in learning Spanish? Is there any change in the trend?
FV: Spanish is almost the second most widely spoken language in the world, but of course in Slovakia, due to the proximity of German-speaking countries, German or even Russian is still more sought after than Spanish. But we have our seven bilingual schools and almost 30 teachers of Spanish paid jointly by Spain and by the schools here in Slovakia. We are the third most frequently visited country within Erasmus, after the Czech Republic – which is very understandable because of the familiarity of the language – and Germany. On the contrary, in terms of Spanish students coming here, we are the second country after the Poles, which is a very good movement of people. There are almost 300 Slovaks going to Spain every year, and we have 190 Spanish Erasmus students in Slovakia annually.