Finnish cuisine: Flavours from the Land of Lakes

IT REQUIRES little insight into Finnish cuisine to guess that people in ‘the land of a thousand lakes’ consume a wide variety of fresh water fish. Yet, Finland could also be dubbed the land of mushrooms and “the sweetest strawberries” as Henna Kaarina Knuuttila called it when explaining that Finland’s “nightless nights” bless the berries with a lot of light, which influences the flavour of the food. 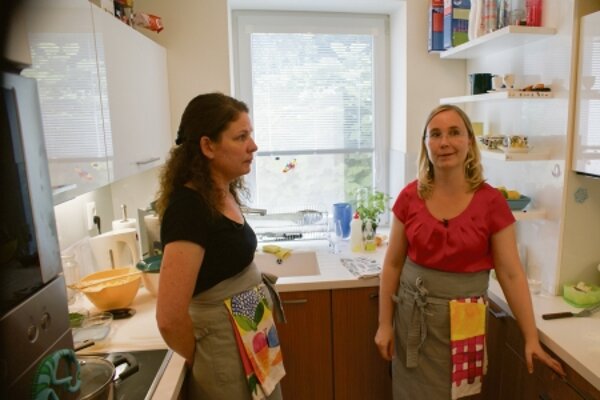 Mushrooms figure prominently in the Finnish diet, and people are allowed to pick them freely, except when they are growing in someone’s backyard, the Finnish chargé d’affaires explained, adding that her homeland exports huge quantities of mushrooms, especially to Italy.

Nevertheless, instead of mushrooms, Knuuttila and Anne Kaiser opted to introduce Finnish cuisine with Karjalenpiirakat, or Carelian pie, and Vatruskat, a half-moon shaped pastry made with mashed potatoes and filled with rice, for the Cooking with Ambassadors programme prepared by The Slovak Spectator and TV Sme. The sourdough rye bread that Kaiser baked according to her own recipe is also an essential part of Finland’s food culture.

“Both the Carelian pie and Vatruskat come from the eastern part of Finland, being part of the eastern heritage,” Knuuttila said, while pressing the end of a glass into the half-centimetre-thick sheet of dough to make small pieces which were then flattened with a “piirakkapulikka”, a wooden Finnish kitchen implement, for the Carelian pie.

Finland, too, is rich in culinary diversity. Christmas traditions come mostly from the western part of the country, while Finland’s Easter traditions originated in the eastern regions, according to Knuuttila, who adds that in the west, for example, the bread is softer and people eat meatballs.

But what is perhaps shared by the whole country is a growing tendency towards a healthier diet, with Knuuttila saying that vegetables and fruits are increasingly appearing on Finnish menus.

“But it was not always like that, mostly due to the difficulty to preserve these [foods] in the winter time,” Knuuttila said, adding that there have been campaigns in her homeland to encourage people to make more health-conscious choices. “We have had campaigns against high consumption of butter and salt, for example.”

It is therefore fortunate that, according to Knuuttila, Finland offers an abundance of berries. This has been a good year for wild raspberries and, thus, “there is plenty of this fruit, which contains no chemicals and is rich in vitamins. Most people pick them in the forest and then put them into their freezer, and make jam or berry drinks to consume in the winter time”.

Finns also use the berries to make sweet berry liquor, while they actually drink a lot of milk.
“Even adults drink milk with their lunch or dinner,” Knuuttila said, adding that the milk Finns consume is enriched with vitamin D due to the long winters when people do not get enough of it.

When asked about the major differences between Slovak and Finnish cuisine, Knuuttila said that Slovaks consume more meat, while Finns eat more fish than Slovaks do. Also, in Slovakia soup is mostly a starter or part of a three course lunch, whereas in Finland it is consumed as a main dish.
“The whole culture of cakes and pastries is completely different in Finland,” Knuuttila said, adding that Finnish pastries are not as sweet as in Slovakia, while Finns consume less sugar. “We don’t have this huge variety of the different types of cakes that you have.”

Even if Finns do not grow coffee, they are passionate coffee drinkers, with Knuuttila suggesting that Finland has the highest consumption of coffee in the world. Another characteristic of Finland is that the students are eligible for free school lunches, a tradition that reaches back to the 1940s. Knuuttila believes that the warm lunches are reflected in the children’s good grades.