THE OLD cable car building at Skalnaté Pleso was reconstructed after 12 weeks of intensive work efforts. The building, designed by famous architect Sušan Samuel Jurkovič, is also known as Encián (Gentian) and at 1,751 metres above sea level, it will become the highest gallery in Slovakia and central Europe. 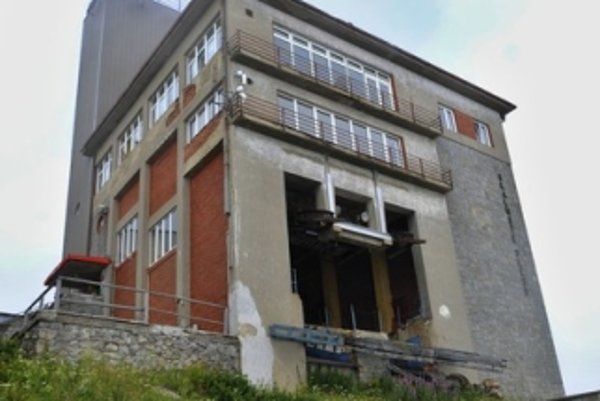 THE OLD cable car building at Skalnaté Pleso was reconstructed after 12 weeks of intensive work efforts. The building, designed by famous architect Sušan Samuel Jurkovič, is also known as Encián (Gentian) and at 1,751 metres above sea level, it will become the highest gallery in Slovakia and central Europe.

The abandoned and dilapidated building was managed by the Tatranský okrášľovací spolok (TOS), the Tatra Beautification Association and the Tatras Volunteering Service. Homeless people from Žakovce and inhabitants of the halfway house in Veľký Slavkov participated in the reconstruction process. Volunteers repaired the rooms of the former restaurant and kitchen on the second floor and constructed and insulated a new roof.

The gallery is to house the first exhibition dedicated to the 140th anniversary of the foundation of the Hungarian Carpathian Association, in addition to other art collections, and will also be used for conferences and lectures. The tower contains a nine-story high look-out point, the TASR newswire wrote.

“Even though we have opened the gallery [on August 2], we are still far from the finish line,” Patrik Kolesár of TOS told the SITA newswire. “There are rooms waiting to be reconstructed – volunteers who help clean the Tatras should find accommodation there in the future. We also want to repair the cable car station in this building. The view of the old cable car lying with the uncoupled wheel under the last pulley is really sad.”

He added that he was very happy to witness the revival of these old Tatra legends: in addition to Encián, the old Tatra tram Kométa (Comet) was brought back into operation after a break caused by technical mishaps.

“August is a crucial month for Kométa,” Ján Sabaka of the Veterán klub železníc (VKŽ), told SITA. “On August 15, 2010, lightning stuck us; on August 11, there was a short circuit in the traction motors. And in August 2012, it went to a repair shop in Vrútky. Now, on August 9, 2013, it is finally back on track,” he added. The tram was produced in 1912 by the Ganz company from Budapest, and the engine was supplied by Siemens. It first served as a postal carriage and was later used to remove snow from the track. As the snow formed a sort of tail behind the tram, it earned the nickname the Comet. It was taken out of use in 1977, but in 1983 railway history enthusiasts repaired it and it was back in service in 1987. However, it had to be taken out of service for further repairs, and more frequent rides started only in the early 1990s. Kométa was kept in operation until 2010.

VKŽ head Ján Vančo admits that the last two years have been difficult, and that for him the fundraising and arranging of volunteers was the hardest part. The direct costs were more than €60,000 and together with indirect costs, they totalled about €100,000. Vančo has already witnessed Kométa’s second return into operation. “I have strange feelings, as the tram behaves slightly differently. Everything is still rough, it makes different sounds, so I have to learn how to live with it,” he described after the first ride.

Sabaka praised the new “lightning fuse”, which could have prevented the accident that occurred in 2010, and also the braking system, which is crucial for passenger safety. The rides are planned mostly for Sundays, as Kométa is operated by volunteers in their free time. The capacity is 80 passengers, and more details can be found at www.tatranskakometa.sk.

In addition to the volunteers and enthusiasts, tourism officials are also happy about Encián and Kométa returning to the Tatras, and hope that the historical legends will attract even more visitors.