Bratislava is not only the administrative capital of Slovakia, it is also the centre of the country’s cultural life. If you are an incurable museumgoer or gallery lover, Bratislava, with plentiful such institutions and a busy event schedule, will suit you very well. 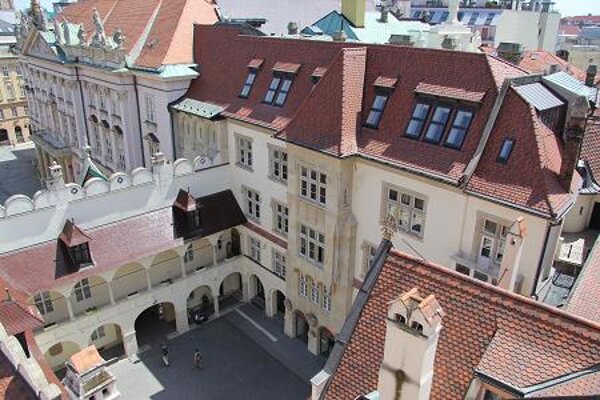 Bratislava is not only the administrative capital of Slovakia, it is also the centre of the country’s cultural life. If you are an incurable museumgoer or gallery lover, Bratislava, with plentiful such institutions and a busy event schedule, will suit you very well.

Galleries in Bratislava are mostly situated in ex-palaces of noblemen, so the historical experience mixes with art, both old and modern. Since there are so many of these palaces here, there are many art galleries too, the best of which are the Slovak National Gallery, the Nedbalka Gallery and Bratislava City Gallery.

The Slovak National Gallery (SNG) is spread across two buildings, Esterházy Palace and the Water Barracks with a new wing built during communism. The façade of the latter might dissuade you from taking a look inside, but it really is worth checking out - at least it will be when a current reconstruction project is completed in 2016. Until then, only the Esterházy Palace will be open, with one floor devoted to classical art and another focusing on temporary exhibitions. Every month, a special programme, produced in English and known as the Thursday Art Talks, introduces Slovak visual art to visitors. It introduces the museum’s permanent collections and usually ends with an informal discussion about the art over a glass of wine.

In the centre of the Old Town, the Bratislava City Gallery occupies Pálffy’s Palace as well as Mirbach’s Palace. It hosts a rich collection of older works plus an array of contemporary pieces. A permanent exhibition entitled “Stories and Phenomena: 20th Century Slovak Fine Art II” offers a glimpse of modern art. It comprises two installations: “Passage” by Matej Krén and “Villa of Mysteries” by Alex Mlynárčik, both intriguing. “Passage” is essentially a pathway through an installation of mirrors and books, which create an illusion of an infinite space around the visitor, who is invited to walk along it. “Villa of Mysteries” is made also of mirrors and paintings that together create a maze, bathed in red. It is unlike anything else in the gallery.

In addition to these installations, there are also permanent exhibitions showcasing Central European Painting and Sculpture 1800–1918, the Celtic mint in Bratislava, Tapestries from England, and a Picture Gallery. Combined they create an incredibly diverse collection - and they are not restricted only to the city centre.

“It reminds me of the Guggenheim gallery in New York, where I was sitting in front of Manet’s Before the Mirror for more than 30 minutes,” said Jana Meňušová, 32, an enthusiastic traveller, sitting in the café of the Gallery Nedbalka, surrounded by books about Slovak painters. “It is much smaller but also much cheaper.”

The new gallery opened in 2012, tucked away in an anonymous building on Nedbalova Street in the Old Town. Its riches only become apparent after paying a €3 entrance fee and proceeding to the first floor, when you are suddenly in a circular open-plan gallery surrounded by paintings and sculptures of Slovak artists mostly from the 20th century. The top floor is given over to the work of Ladislav Medňanský, from which you can peer over another three levels of galleries including the work of Ján Fulla, Ladislav Guderna or the Galanda group, among others. The entrance hall is used for temporary exhibitions. The gallery is fully accessible to disabled visitors via a lift to each floor.
________________________________________

On the northern corner of a windy, artificial island in the middle of the Danube, 15 km from downtown Bratislava, is the Danubiana Meulensteen Art Museum. This nest of modern art is accessible via car or the No. 91 bus from the SNP Bridge to Čunovo - followed by a 4-km walk through the dam. On Sundays during the summer season it is also possible to take a boat trip from Bratislava city centre directly to the island, with fares including the gallery entrance fee.

The reward is a magnificent view of the Danube accompanied by the statues in Danubiana Park, plus a large, airy exhibition hall, featuring a constantly changing roster of contemporary art. New premises have also recently been added.

Numerous museums dotted across Slovakia are governed by a central Slovak National Museum organisation, and eight of them are in Bratislava. These include the Natural History Museum, permanently exhibiting a huge number of objects of living and non-living nature, alongside other different temporary exhibitions. It is located on the embankment, close to the port and tiny park.

Žižkova Street, right under castle hill, is a home to four museums: the Archaeological Museum, the Music Museum and two others focused on the lives of Hungarian and Carpathian German minorities. There are also museums of Jewish and Croatian cultures in other parts of the city, also reflecting the life of ethnic minorities in Slovakia. Bratislava Castle is also part of the Slovak National Museum family, and houses temporary and permanent exhibitions that tell the story both of the fortress itself and the history of the territory known today as Slovakia. A tour inside concludes with a trip up the Coronation Tower, which affords magnificent views over the city.

The Museum of Transport, next to the main railway station, hosts a variety of vehicles and accessories, such as old steam locomotives, snowploughs and other railway machines. Old warehouses are also stocked with cars, both old and modern, classics and prototypes, as well as motorbikes and bicycles. In short, everything that a transport or engineering nut might desire.

The Town Hall museums in the Old Town Hall focus on the history of the city as well as offering exhibits of wine and furniture in the nearby Apponyi Palace. Weapons are presented in Michael’s Gate which is close to the Museum of Pharmacy located in the yellow building behind the gate. Closer to the castle is the picturesque House of the Good Shepherd which houses the Museum of Clocks. Two other museums in the historical centre are devoted to musician Johann Nepomuk Hummel and sculptor Arthur Fleischmann, both of whom were born in Bratislava. The city is also in charge of managing Devín Castle and the ruined foundations of a Roman military camp called Gerulata in Rusovce.

Cultural life is also rich in Bratislava as far as concerts, festivals and exhibitions are concerned. During the summer months, a programme called Cultural Summer includes variety of concerts and happenings all over the Old Town. The two highlights of every season are Shakespeare’s plays performed in the grounds of Bratislava Castle and the re-enactment of coronations of Hungarian kings and queens. The Bratislava Jazz Days festival also draws the best jazzmen to Slovakia from all over the world.
Year round, the Slovak National Theatre is the jewel in Bratislava’s theatrical crown. It is housed in two buildings: the ornate, historical one on Hviezdoslavovo námestie (square) and a modern, well-appointed new construction next to Eurovea. Opera and ballets admirers from abroad come to Bratislava to see unforgettable performances, such as Don Giovanni, Nabucco or Swan Lake. The home of the Slovak Philharmonic orchestra also re-opened in 2012 after extensive reconstruction. It offers a varied programme during a season that lasts from September to June.