IN AN attempt to cut down on violence, a stricter set of rules look set to regulate spectators at sporting events, according to a new proposal from the Ministry of Education, Science, Research and Sports. 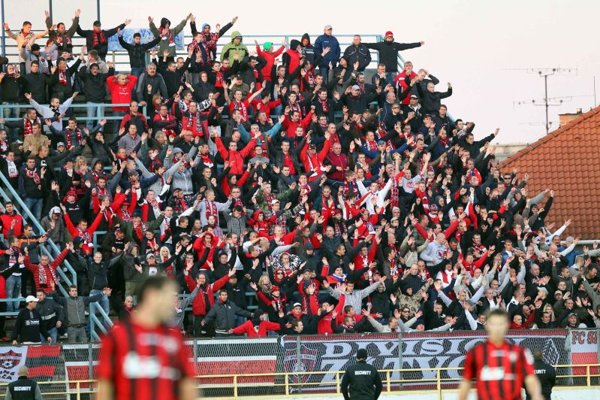 IN AN attempt to cut down on violence, a stricter set of rules look set to regulate spectators at sporting events, according to a new proposal from the Ministry of Education, Science, Research and Sports.

On August 13, the ministry submitted proposed legislation to departmental review. Should it come into force, the new law would ban spectators with a history of violence from attending certain sporting events and require visiting team supporters to show their IDs when attending so-called high risk events.

Slovak sports associations have welcomed the ministry’s efforts, pointing to the growing number of cases of spectator violence. One of the latest incidents occurred during an August 18 Corgoň Liga, Slovak football’s first division, match in Bratislava. Around 20 fans of the home team Slovan Bratislava attacked opposition supporters from Ružomberok with smoke bombs. Two children and one man were injured, and stadium seats were damaged.

On the very same day at a football match in Slovenský Grob, one fan attacked another with a machete, Slovak Fans Association (AFS) head Marián Galbavý told The Slovak Spectator.

“It cannot be possible that every weekend hundreds of fans’ health and safety is threatened by [other] fans or [a lack of] security and police,” Galbavý said.

However, the new law will affect much more than football, even in places where violence is virtually unheard of. This means higher, unnecessary costs for increased security measures for organisers, Confederation of Sport Associations (KŠZ) General Secretary Zdenko Kríž told The Slovak Spectator. He proposes creating a law that focuses only on the most problematic sports, like football and ice hockey.

Galbavý also said that many problems could be avoided if authorities just enforced current laws. He also objected to the stricter monitoring of fans, saying he disagrees with what he sees as the proposal’s underlying idea, that “if you have done nothing wrong, you have nothing to hide”.

The new law introduces special safety rules for specific types of events, like those with high attendance or matches in the final rounds of the season, which are deemed to have a higher risk of violence. The Education Ministry proposes stricter punishments for fans who break the law, with fines of up to €1,000 or a ban on attending public events for up to five years. The ministry is also proposing to ban offenders from attending the specific kinds of matches at which they broke the law, and requiring those offenders to visit the local police station whenever such events are held for up to six months.

“Our [authors’] common goal is to create such conditions under which sports arenas will be dignified places for fans with a sense of fair-play, and not arenas for people who see sports events as an opportunity for skirmishes,” Education Ministry spokesman Michal Kaliňák said.

During the last Corgoň Liga season, 47 of 198 matches were deemed high risk, and 83 football hooligans were detained by police. Two police officers were injured during clashes, according to the Sme daily.

The new legislation says special safety rules apply to any sports event marked by local authorities or organisers as high risk. All events where organisers expect 4,000 or more people to attend would automatically qualify. Every football or ice hockey match in the highest division and the last four rounds of football and hockey cup competitions will also be subject to the special safety rules, according to the proposal.

Organisers of high risk events may only allow the sale and consumption of alcoholic beverages with less than 4 percent alcohol by volume. They will also have to create special sections to separate home team fans from visiting team supporters, according to the proposal. Municipalities already have the right to forbid alcohol at these matches and the new legislation leaves these decisions up to local authorities, Sme reported.

“The aim of the proposal is, in the first place, to regulate events with a higher occurrence of disorder, brawls or fan violence, as well as events where the safety risk is caused by a huge amount of people,” Kaliňák told The Slovak Spectator. He added that the new legislation clearly distinguishes sporting events so as not to impose a higher financial burden on organisers of low risk events.

The new law should impact “well-behaved people as little as possible” at small sporting events with attendance of 300 people or less, according to ministry’s report on the new law.

Visiting team supporters will be allowed to attend a high risk match only with a ticket issued in their name and after verifying their identity. The authors of the new legislation also want to create a more effective monitoring system of those who violate the rules, proposing to keep photographs of offenders. Fans will be prohibited from covering their faces.

“The law may be revised; it just should not impact the 200,000 well behaved people, visitors, event organisers or sportsmen because 20 hooligans,” Ryšavý said.

The AFS considers the range of fan monitoring to be inappropriate, Galbavý said, pointing out that the new legislation even requires the monitoring of minors. He added that spectators could be seriously punished by being prohibited from attending some sports matches because of their record in the monitoring system, yet, the law has no mechanism for fans to appeal.

“This is not acceptable for a democratic society,” Galbavý said. “Every citizen always has to have the right to appeal when someone else is deciding about his rights.”

The revision will also retain some current measures, like restrictions on bringing pyrotechnics or flags of foreign countries to events.

If the new rules pacify the hardcore hooligans who participate in violent activities and inspire other to do the same it can be considered a success, Kríž said, before going on to question the enforcement of current laws.

Kaliňák said current laws are ineffective for reducing fan violence and that applying it has been problematic. He sees the adoption of the new law as inevitable.