THE AUGUST festival of musicals, which takes place annually in the small spa town of Brusno, will henceforth bear the name of famous and recently deceased director Jozef Bednárik. Bednárik, who died on August 22 at the age of 65, helped make the festival the tradition that it is today, and he even wrote the script for this year’s edition and sat on the jury for the talent competition. Moreover, he dedicated a huge part of his life to this theatrical genre. 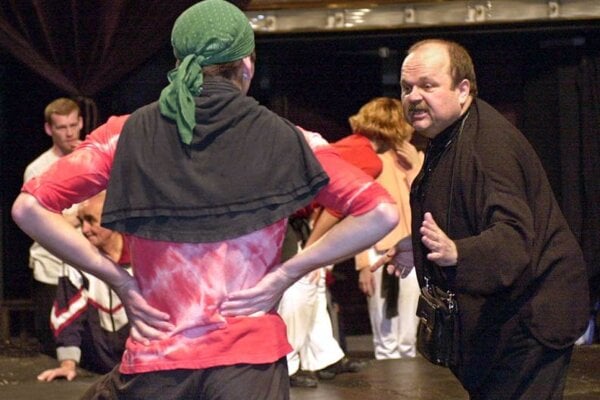 Jozef Bednárik (r) during a rehearsal at the Andrej Bagár Theatre in Nitra before the premiere of the musical Zorba. (Source: TASR)
Font size:A-|A+0

THE AUGUST festival of musicals, which takes place annually in the small spa town of Brusno, will henceforth bear the name of famous and recently deceased director Jozef Bednárik. Bednárik, who died on August 22 at the age of 65, helped make the festival the tradition that it is today, and he even wrote the script for this year’s edition and sat on the jury for the talent competition. Moreover, he dedicated a huge part of his life to this theatrical genre.

Bednárik came from Zeleneč where he was an amateur actor. He studied at the secondary School of Applied Arts in Bratislava, while also playing in the “Theatre Behind Forestage” there. After graduating from the Academy of Performing Arts in the capital, he became a professional actor in the Nitra theatre for ten years, and a director there for another ten years, according to the Nový čas daily. At the same time, he also directed the amateurs of his native Zeleneč, who garnered several awards abroad. Since 1989, he worked as a freelance theatre director, focusing on musicals and later on opera. He directed theatre pieces performed at festivals abroad, some of which brought him wider acclaim.

He directed operas and musicals in Slovakia and the Czech Republic, the TASR newswire wrote. At the Prague State Opera in 1996 he directed Rossini’s The Turk in Italy and Romeo and Juliet, which was nominated for the Afréd Radok Prize. He also directed musicals like Rusalka, Monte Cristo, Joan of Arc, Elixir of Life, Angelika and the legendary Dracula, which became the most popular musical performance in Czech history.

“He re-wrote the history of the Czech musical,” Czech website Musical-opereta.cz wrote. He also directed operas in the Slovak National Theatre (SND), like Verdi’s Don Carlos, Bizet’s Carmen, Offenbach’s The Tales of Hoffmann and Gunaud’s Faust, which won at the Edinburgh International Festival.

Though he announced his retirement several times, he only began to ease his workload just last year, while still collaborating on the Musical Festival in Brusno and organising the evenings of chansons, featuring French-style songs inspired by Edith Piaf, Lucienne Delyle and others.

He was known for working hard and being demanding of others and himself.

Despite his success, Bednárik lived a relatively simple life. Until recently, he only lived in rented flats, he valued his privacy and was more interested in collecting experiences of visiting theatre performances in other countries than accumulating wealth. In an interview for the Sme daily, he confessed that he did not have a car, he did not use a computer and usually left his mobile phone at home on his desk. “When everyone around me meddles with Facebook, Google, Wikipedia, I prefer to browse in a paper book and listen to a mono recording of Mahler,” he said in his last interview one day before he was taken to the hospital. “One can live like this. I am satisfied,” he concluded symbolically.

On Monday, August 19, he was found unconscious in his flat by his nephew, and brought to the hospital where he died in an induced coma on the evening of August 22. He has been suffering from back pain, high blood pressure and diabetes, but it was not obvious that his condition was that serious.

The Brusno Musical Festival has been renamed the Musical Festival of Jozef Bednárik, the organisers informed. During the festival, musical stars from Slovakia and the Czech Republic paid tribute to the director and co-organiser who died just a day before. The official farewell takes place on August 30 at 10:30 in the SND historical building in Hviezdoslavovo Square.

“I have always admired him,” actress and politician Magda Vášáryová said about Bednárik, as quoted by Sme, “that he would set off in summer with one shirt and one boxer shorts and tour all the theatres available. He had no life of his own, his life was the people in the theatre – onstage, behind the stage as well as in the auditorium.”