THE FIRST Bratislava cinema to focus solely on quality European films, Kino Film Europe, opened on August 23 in the Pisztory Palace. The historical palace on Štefánikova Street was once home to the Lenin museum, and films will be shown in the very same room in which Soviet-era propaganda movies used to be screened. 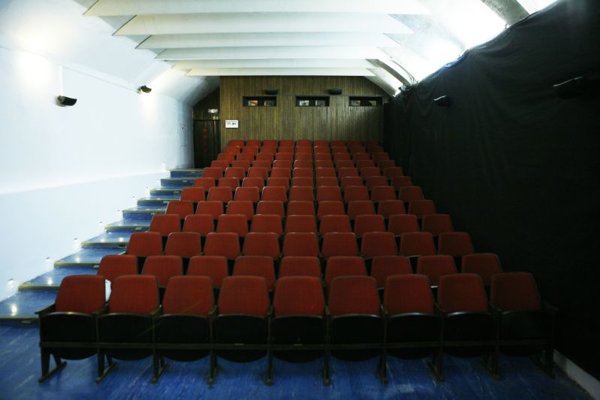 THE FIRST Bratislava cinema to focus solely on quality European films, Kino Film Europe, opened on August 23 in the Pisztory Palace. The historical palace on Štefánikova Street was once home to the Lenin museum, and films will be shown in the very same room in which Soviet-era propaganda movies used to be screened.

The palace itself, dating back to the late 19th century, has had a rich and turbulent history: originally owned by prominent local pharmacist Felix Pisztory, it became a German Embassy during the Second World War, then Lenin’s Museum during communism and, after the Velvet Revolution, it became the House of Slovaks Abroad. But after being abandoned for 12 twelve years, this national historical monument became dilapidated and in need of repairs. In 2011, the Old Town borough began transforming it into a cultural centre, with several civic associations and initiatives sharing the picturesque building for different purposes.

“Recently, it has become a habit of small cinemas with unique atmospheres [to] disappear [and] to be replaced by big multiplexes,” Old Town mayor Tatiana Rosová said at the launch of the cinema. “I am happy that we managed to open such a cinema in the Old Town in the Pisztory Palace. It offers an alternative to what audiences can see in the shopping centres’ multiplex cinemas.”

Award-winning European films will be shown four times a week, Tuesdays through Fridays at 19:00, with tickets costing €4. However, in the mornings the cinema will offer reduced admission fees to children, students and seniors. The first film to be screened in Pisztory on September 3 is the first in a 15-part series called Príbeh filmu: Odysea (The Story of Film: Odyssey), which documents the history of cinematography and the film industry. All 15 parts are to be screened gradually.

“There used to be cinema in the Pisztory Palace in the 1950s, and [back] then it was a miracle of technology which everyone wanted to see,” Magda Vášáryová, head of Via Cultura, said at the launch. “Currently, this cinema has been promoted to a place where film is presented as art, as a piece of information.” Via Cultura (viacultura.sk) is one of the initiatives that organises events in the palace, with a range of offerings including exhibitions of art students, the ceremony and exhibition of the Oskar Čepán awards, Design Week, the alternative festival of contemporary photography and the Error Festival of theatre of the homeless.

Ivan Hronec of Film Europe said that they would also allow screenings of films from other distribution companies or associations, and he praised the cohabitation with other cultural activities: “This is a space where we feel really good. This space does not live only through ‘academic’ film art, or [for] exclusive, narrowly-oriented spectators.”

Hronec concluded that the cinema ultimately strives to support the culture-loving citizens of Bratislava and Slovakia.