THE MOST important economic exhibition in the history of Žilina was the Industrial Exhibition (Iparkiállitás Zsolna), which opened in the northern Slovak city on August 1, 1903. 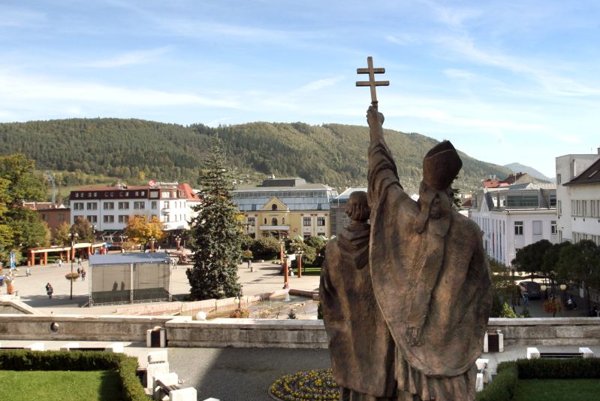 The town of Žilina has changed a lot since the time of the Industrial Exhibition. (Source: SME)
Font size:A-|A+0

THE MOST important economic exhibition in the history of Žilina was the Industrial Exhibition (Iparkiállitás Zsolna), which opened in the northern Slovak city on August 1, 1903.

The exhibition was originally intended to be local, but the preparation committee decided in May 1902 to include exhibitors from the regions of Trenčín, Nitra, Turiec, Liptov and Orava. At that time, Žilina was a bustling town with a crucial railway hub, plenty of jobs and an abundance of financial capital which helped industry develop there.

The fairground was built within several months at the Strelnica complex (on the spot of the current sports complex near the Váh River), on an area of about 10 hectares, which included 25 pavilions, with the biggest being the industrial pavilion, where many self-employed and small entrepreneurs were presented. Some bigger exhibitors, like the Hungarian Factory of Woolen Goods, Army Cloth and Rugs from Žilina; the Lietavská Lúčka cement factory; the Košice-Bohumín railway; a Martin-based brewery; Schreiber glassworks from Lednické Rovne; Peter Makovický’s bryndza plant from Ružomberok, fur traders Peter Holéci and Matej Kostolný from Liptovský Mikuláš, the Biel a Jellinek book-printing works from Žilina and others each had their own pavilion.

According to the catalogue, 353 exhibitors participated in the exhibition, and were divided into 14 groups according to profession. Most of them were from Žilina, the TASR newswire wrote. Almost 60,000 visitors came to see the diverse array of crafts and industrial products. The exhibition ended on September 15, 1903.