SIX OF eight Slovak paragliders detained in mid-May for what the Iranian regime alleged was espionage, are back in Slovakia with Prime Minister Robert Fico claiming the release negotiated with Iran did not include any financial transactions. 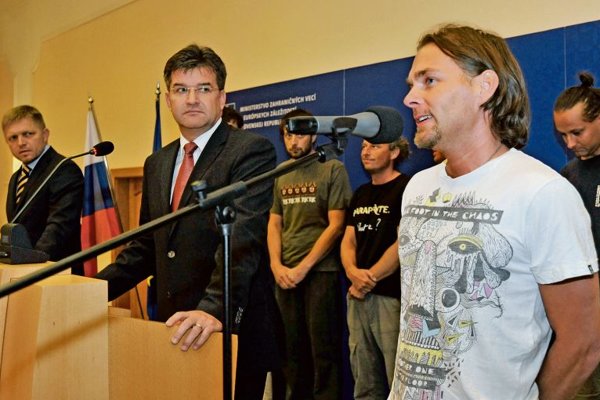 SIX OF eight Slovak paragliders detained in mid-May for what the Iranian regime alleged was espionage, are back in Slovakia with Prime Minister Robert Fico claiming the release negotiated with Iran did not include any financial transactions.

Shortly after landing in Slovakia on September 1, the paragliders, who spent three and half months in an Iranian prison, appeared at a press conference with Fico and Foreign Affairs Minister Miroslav Lajčák, who say they have a plan to bring home the two remaining paragliders as well. One of the two Slovaks remaining in Iran is a nuclear physicist, according to the Sme daily.

“The negotiations with the Iranian side were proper and, as you can see, their result is the release of six of the eight detained Slovaks,” Fico said, as quoted by the SITA newswire.

The eight Slovaks were detained in mid-May for what Iranian authorities called “illegal activities, including taking photos of prohibited places” in the Isfahan province, where several key nuclear facilities are located, including at least one plant used for enriching uranium. They are members of Paragliding Expedition Slovakia, a group that has organised several expeditions in recent years, and which made documentary films that they later presented at film festivals. The group reportedly travelled to Iran as tourists at the beginning of May.

“Two citizens of Slovakia remain detained on the territory of Iran, since the Iranian authorities need to check on further suspicions,” Fico said, as quoted by SITA, adding that even though the Slovak authorities do have a plan for bringing these citizens home. “It will not be simple, and I can confirm in this moment that the negotiations will be extraordinarily complicated,” he said.

The special team working on the case of the detained Slovaks included employees of the Slovak Intelligence Service (SIS) and the Ministry of Foreign Affairs. However, Fico remained tight-lipped about further information on the composition of the delegation or the content of the talks.
Vladislav Frigo, one of the released paragliders, said that the pair who remained in Iran are in good condition: “We were with them this morning,” Frigo said, as quoted by SITA.

“It was bearable,” Frigo said of the captive conditions, while explaining that they shared one large cell, which had a toilet, a television and a refrigerator. They were also allowed to cook their own meals and the Iranians shopped for them if they asked for it.

Back in June, Iranian authorities confirmed that the Slovak paragliders had been detained for what they called “behaving inappropriately and having unconventional devices with them”, as reported by the TASR newswire.

According to Frigo, they were detained for having dual-band transmitters, adding that “we did not use the band which was banned in Iran. But we had them, so this was what we violated”, SITA reported.

Lajčák urged people planning trips to exotic countries to take time to learn the necessary information about a given country first and to register with the local Slovak representative office, TASR wrote.

“We have to be aware that not every country in the world has a similar regime as we do,” the minister said, as quoted by TASR. “What is customary and permitted here, might not be automatically permitted in other countries.”

Sme meanwhile reported that Pavol Šeliga, who is still in Iran, is a graduate of the Institute of Nuclear and Physical Engineering of the Slovak University of Technology in Bratislava (STU), as confirmed by the director of the institute, Vladimír Slugeň. Šeliga currently works for a company dealing with designing security systems for the area of nuclear energy. The Pravda daily on September 3 reported that the second detained Slovak, Marek Stolarčík, is an expert in navigation technology.

The released paragliders claim that they respected the ban on taking photos under the altitude of 2,300 metres.

Another Slovak, Matej Valuch, was arrested on August 23, 2012 by the Iranian authorities and released on February 6, 2013, appearing at a press conference in Slovakia two days later.

The 26-year-old Slovak national was detained over what Iranian officials also alleged was a case of espionage.

Valuch appeared in a video recording called ‘Hunter in Trap [sic]’, shot by the Iranian Ministry of Intelligence and posted on YouTube, while speaking in English, dubbed into Persian. He appeared to confess to working clandestinely for the US Central Intelligence Agency (CIA).

“I want to say that I am not a spy,” said Valuch at the press conference accompanied by Lajčák after returning to Slovakia.

Lajčák said at the time that getting Valuch, who studied business to the bachelor level at Matej Bel University in Banská Bystrica, back to Slovakia did not cost the country a single euro, while thanking his colleagues for what he described as an excellent job working on the case.

Upon his return Valuch told the media that he could not explain why he was accused of being a spy. When talking about his arrest, Valuch said the investigators informed him that the people who had hired him were with the CIA, so he was not detained as a CIA agent, adding that he does not know, and therefore cannot confirm, the real identities of the people he was cooperating with, TASR wrote in February.

Regarding the origin of the video, Valuch said that the Iranians made a short film in September 2012, a few weeks after his arrest, in which he talked about his work in the area of HR and his business projects. They told him they would show the video to someone in a position of high authority who would assist in releasing him.