SANG-HOON Park faces no dilemmas when deciding which dishes to select for introducing Korean cuisine to Slovaks. “Kimchi is eaten every day, almost with every meal,” the Ambassador of the Republic of Korea explained, while carefully spreading the reddish kimchi seasoning between Chinese cabbage leaves. 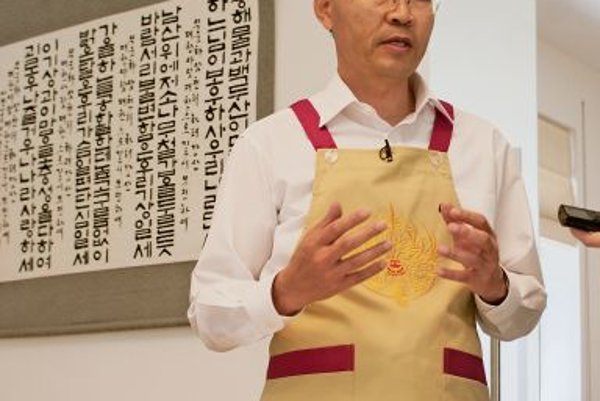 Anyone listening to the ambassador’s introduction to the health benefits of the fermented vegetable, which has a deeply rooted tradition in Korea, understands that it is a quintessential part of South Korean cuisine. Koreans say “kimchi”, instead of cheese, for example, when smiling for photographs.
“In general, fermented food has exceptional health benefits, such as reducing the level of cholesterol and enhancing the digestive system of your body while preventing cancer,” Ambassador Park said, adding that kimchi is low in calories and rich in fibre and vitamins A, B and C.

According to the ambassador, kimchi, which illustrates Koreans’ traditional food making skills, also contains a higher level of iron and calcium, which comes from the added fish sauce. Korea was traditionally an agricultural society, consuming a lot of grains and vegetables, and in order for vegetables to last during the wintertime, the Koreans dried and salted them, which evolved into fermentation, a “great achievement in the history of food processing”, Ambassador Park said.

“One important characteristic of Korean cuisine is balance and harmony,” Park told the Cooking with Ambassadors programme prepared by The Slovak Spectator and TV Sme, explaining that it means, for example, achieving balance between the main dish and the side dishes, and balance between different ingredients and seasonings. “Great care is taken to achieve harmony between the different colours of various ingredients.”

To maintain the balance of the cooking programme, Park also prepared bulgogi, a marinated beef dish consumed by Koreans on special occasions.

“While kimchi is a daily food, bulgogi is more like party food, eaten mostly on occasions when you invite guests, celebrate a birthday or when you are eating out with family members,” Park said, adding that this dish is widely known abroad.

Kimchi and rice form the basics of Korean cuisine, and Korea’s food culture has been influenced by the cuisines of neighbouring countries, like Japan and China.

When asked about the differences between Slovak and Korean cuisine, Park cited the richness of the seafood in his homeland, which is surrounded by the sea, while noting that Slovakia is a landlocked country. While the ambassador admits that he does not have much experience with traditional Slovak cuisine, he finds Slovak food to be “very palatable and acceptable”.

“I like Slovak food, though halušky is a little bit hearty for me. But, for example, lokše is delicious,” Park said of his experiences with Slovak food, adding that a goose feast in Slovenský Grob was especially memorable and delicious. “Indeed, I am now waiting for the season of goose-meat, and particularly the season of burčiak.”

As for how Slovaks respond to the most traditional Korean dish, Park suggested that “people who have been to Korea like the taste of kimchi, but perhaps it takes a little time to get used to it”. The ambassador also suggested that people can find all the ingredients here in Slovakia, such as Chinese cabbage, salt, garlic, onion, green onion, ginger and red chilli powder and salted fish sauce, and that they can make kimchi if they want to taste something typically Korean.