IT IS not common to see people donning traditional folk costumes in the capital, nor does one often get the change to watch blacksmiths, weavers and potters at work. But on the weekend of August 31, locals and visitors were able to see both as part of the annual Craftsmen Days event in Bratislava. 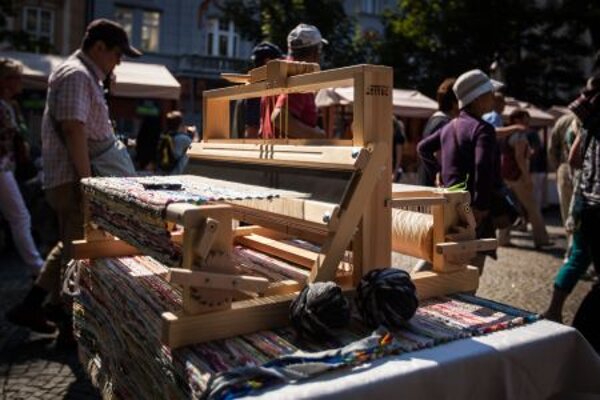 IT IS not common to see people donning traditional folk costumes in the capital, nor does one often get the change to watch blacksmiths, weavers and potters at work. But on the weekend of August 31, locals and visitors were able to see both as part of the annual Craftsmen Days event in Bratislava.

In addition to offering people the chance to watch how traditional crafts are made and learn how such traditions can be incorporated into modern design, Craftsmen Days enabled people to taste traditional Slovak food or watch a programme of folklore music and dance. ÚĽUV, the state-supported cultural organisation that strives to preserve old artistic and artisan traditions, organised the event, which has become a permanent item in the schedule of Bratislava’s Cultural Summer programme. Spread out over two days, it took place mostly in the Main Square and Hviezdoslavovo Square, as well as in other venues in the city centre.

“This year Craftsmen Days goes back to its roots and focuses again on craftsmen,” ÚĽUV informed. “Over 100 craftsmen were expected to attend and perform their skills in crafts; accompanied folk musical ensembles. Visitors were also able to experience dance schools, ÚĽUV workshops, a reading room in Radnička and a wooden carousel.”

During the day, thick crowds browsed the stalls in Hviezdoslavovo Square. An improvised auditorium was erected in front of the modest stage in the middle of the square, where folklore shows and craft demonstrations were performed.

On Saturday evening, the core of the event shifted to the big stage in the Main Square, where the titles “Master of Folk Art Production” were awarded to six artisans, followed by a gala entertainment programme. The programme is different each year, and this time folklore ensembles Technik and Šumiačan took turns with the comedic dance troupe Credance and Balkansambel, a band merging Balkan music with other folklore and ethnic styles. The core of the audience consisted of Bratislavans, but some curious foreigners also stopped by to watch the show.

“The 23rd year of the annual Craftsmen Days focuses on blacksmithing,” ÚĽUV writes on its website. “The best smiths from Slovakia showed their skills with iron to visitors in Primaciálne Square.”

Those who happened to miss this year’s event can be consoled by the certainty that next year at the end of August, Bratislava will once again celebrate traditional Slovak crafts and performing arts, reminding Slovaks of their roots and sharing these rich traditions with foreign visitors.