THE THEATRE project Vlak Lustig (The Train of Hope) toured Slovak railway stations to commemorate Slovak-Jewish culture and the 6 million Jews transported during the Second World War to detention and death camps. 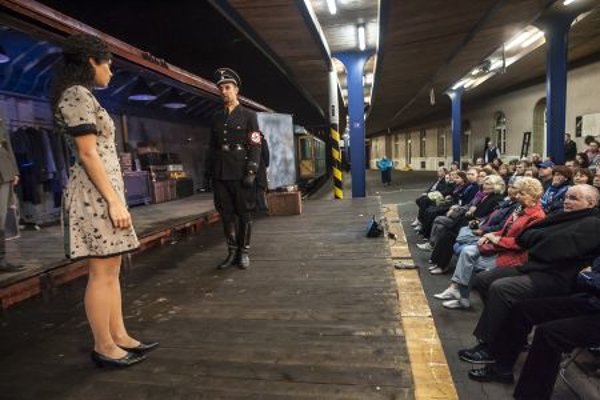 THE THEATRE project Vlak Lustig (The Train of Hope) toured Slovak railway stations to commemorate Slovak-Jewish culture and the 6 million Jews transported during the Second World War to detention and death camps.

The Vlak Lustig project is part of the 16th year of the festival of Jewish culture, Devěr bran ( Nine Gates) 2013, organised in cooperation with the Czech Centre in Bratislava. The emphasis this year is on Jewish culture, and the Jewish and Roma victims were commemorated in the theatre performance Modlitba pro Kateřinu Horovitzovou (Prayer for Kateřina Horovitzová), adapted from a book by Czech writer Arnošt Lustig.

The play was staged on a train that was transformed into a theatre for this performance, which stopped in six Slovak towns and cities – Žilina, Poprad, Prešov, Košice, Banská Bystrica and Bratislava – between August 20 and 27. It was performed by the actors of the Prague theatre Pod Palmovkou and directed by the theatre’s head, Petr Kracík, the TASR newswire wrote.

Those who attended were also able to see an exhibition from the Military History Institute called Akce: Dúvěrné Iurael (Operation: Classified Israel), which brings to light one of the most interesting chapters in the history of Czech-Israeli relations – the technical and personnel aid of then Czechoslovakia to the state of Israel, which was established by that time, and was in conflict with neighbouring countries. In Bratislava, the play was performed on August 25, and the following two days also featured performances by the Menorah band.

Last year’s edition saw a successful turnout, with around 5,000 people visiting at train stations in 14 regional cities in the Czech Republic. Two performances were also staged at Polish stations in Krakow in Auschwitz.

“The performances and concerts are accompanied by the exhibition and movie screenings in the accompanying carriages, which are available from the afternoon on,” Petra Darovcová of the Czech Centre informed. “A lecture on the Armenian genocide took place in early evening,” she added. In addition to the Jewish and Roma victims, the tour also commemorated the Armenian victims of genocide in the First World War, the Czech centre informed.