Let’s take a break in the city

Bratislava has suffered at the hands of ruthless investors and developers over the years - not least the communist government - who not only changed the face of the city by modifying and constructing buildings, but also ruined playgrounds and removed greenery. It is remarkable, therefore, that so many of Bratislava’s parks and woods have been preserved to this day. 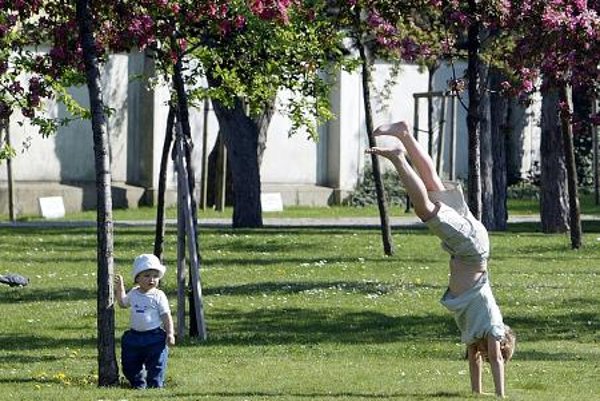 Bratislava has suffered at the hands of ruthless investors and developers over the years - not least the communist government - who not only changed the face of the city by modifying and constructing buildings, but also ruined playgrounds and removed greenery. It is remarkable, therefore, that so many of Bratislava’s parks and woods have been preserved to this day.

There are still numerous choices of whether to spend free time in an oasis of peace and quiet situated in city centre or completely surrounded by the forests, lakes and streams outside the metropolis. According to official city sources, 4,000 hectares of the city’s total area is green. And if that is still not enough, there’s always the white-water canal too.

Inside the city centre, only about 500m from Kamenné Square, is the well-kept Medická záhrada (garden), a popular place among young Bratislavans, who flock there when the sun shines. Some just sit on benches or on the ground; others play football, badminton or frisbee. The other main garden in the city centre is Prezidentská záhrada (garden), a park just behind the Grassalkovich Palace, home of Slovakia’s president. The trees lining the eastern fence were all planted by foreign politicians during their stays in Bratislava. The garden features benches, statues and a fountain, while the lawns can be used for sports (if the keeper is in good mood).
The Botanical Garden of Comenius University provides a similar refuge from hurried city life. Visitors can admire a huge variety of plant species in outside landscapes, as well as in greenhouses. The garden used to be primarily a research centre for Comenius University, but in the course of time it has become a park to be enjoyed by the general public too.

The Sad Janka Kráľa, established in 1774-76 as one of the first public parks in central Europe, is located just across the Danube from Bratislava’s historical centre. Many visitors of the nearby Aupark Shopping Centre stop to relax there. One interesting attraction is the surviving part of a gothic tower. It was moved here from the Franciscan Church, located in the historical centre, which was partly destroyed by an earthquake in 1897. The park runs all the way to a river bank area called Tyršovo nábrežie where several bars and restaurants are located including a couple that are actually on boats. Between May and September, the popular Magio Beach offers fun, playgrounds and more bars.

An even more peaceful option is Horský park, a piece of unspoilt nature on a hill that separates the Old Town from the western districts. Horský Park, which can be translated as “Mountain Park”, has its very own atmosphere. Despite its proximity to the city, visitors can breathe clean air, get lost in forests or relax on numerous wooden benches that are spread all over the area. There is an open-air gallery and a cosy café beside the main entrance, which are popular meeting places.

The park is an approximate 30-minute walk along Hlboká Street (map B, C 1) from the city centre, close to the Slavín memorial. On the way down, it is possible to explore the streets around Slavín, which are among the most prestigious addresses in the city.

“I like that there are forests right around the city and it is really easy to get up in to the woods and get away from the city life here,” said Paul McCullough, an American who moved to Bratislava almost 20 years ago.

Koliba is an extremely popular area, with several snack bars sat atop a slope used for bobsleigh in summer and skiing in winter. The area is dominated by the highest structure in Bratislava, the TV Tower, with an observation deck and restaurant. Paths and trails for hiking and biking lead all over the area, while a cableway connects upper Koliba with the lower-down former hotel, Snežienka.

The western passage to the marvellous area of the city’s forests is called Železná Studienka. Passing under the red steel railway bridge, visitors are greeted by a big playground, including fields for football, volleyball, basketball, pétanque and table tennis. There is also an old amphitheatre with a café and toilets, offering another place to sit and enjoy the beautiful scenery. However, it would be pity not to go further into the forest. The lakes and zigzagging pathways with restaurants in reconstructed old mills are just waiting to be discovered. The trails lead deeper to the forest, some connecting to nearby Koliba.

Slovakia may be a landlocked country, but its residents have learned to make the most of its plentiful lakes, even in the heart of the city. Bratislava’s biggest lake is Zlaté Piesky, near to the airport, which offers the chance to water-ski and/or bathe naked at an unofficial nudists’ beach on the eastern shore. (There is a fee for entry to the lake.) The closest lake to the city centre is Kuchajda, near to the Polus City Centre, which also offers various sporting activities and water bikes.

Other options for swimmers include Veľký Draždiak in Petržalka, Vajnorské jazero in Vajnory and Rusovské jazero in Rusovce. There are also numerous wellness centres and swimming pools open to the public, including Hotel Nivy (www.hotelnivy.sk), Golem Club and a wellness centre in the Central Shopping Centre (www.central.sk/en).