FOR THE first time since September 9 was listed the Memorial Day for Victims of the Holocaust and of Racial Violence, a high representative of the Catholic Church attended the official commemorative event held on Rybné Square, the site of a former Jewish synagogue. 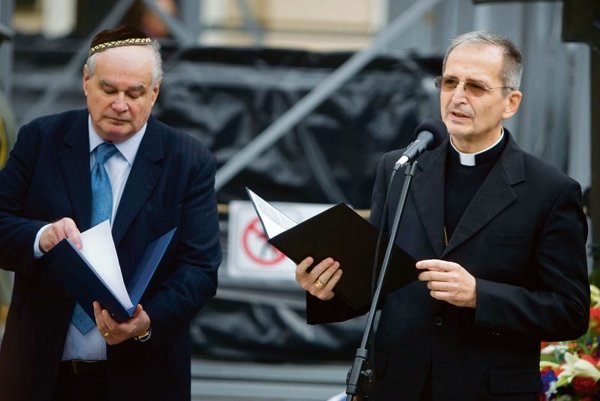 FOR THE first time since September 9 was listed the Memorial Day for Victims of the Holocaust and of Racial Violence, a high representative of the Catholic Church attended the official commemorative event held on Rybné Square, the site of a former Jewish synagogue.

Archbishop Stanislav Zvolenský, chair of the Conference of Bishops of Slovakia (KBS), called the World War II-era Nazi-allied Slovak state a painful part of the Catholic Church’s history. Regarding the deportation of Jews to the death camps, he confessed that the Slovaks were often dragged away with the help of government officials, the Sme daily reported. For the church is it important “to also deepen the consciousness of wrongdoing, which in the past [caused] sons and daughters to move away from the spirit of Jesus Christ and the message of the Word of God”, he said.

“With deep grief we remember the tragedy which the Shoah [Hebrew word for Holocaust - ed. note] represents for our homeland, and therefore we unequivocally refuse any hatred, racism, dishonour of human dignity of any human being,” Zvolenský said, as quoted by the SITA newswire.

The Jewish community in Slovakia expressed satisfaction that Zvolenský came to the event.

“I consider it a message sent by the archbishop from the Holocaust Memorial to all, even lower-grade priests of the Catholic Church,” Pavol Mešťan, head of the Slovak National Museum’s Museum of Jewish Culture, told The Slovak Spectator.

Igor Rintel, chair of the Federation of Jewish Communities in Slovakia, said in his speech he hopes Zvolenský’s presence will be a step towards strengthening the dialogue between Christians and Jews.
On September 9, 1941 the so-called Jewish Code, which enabled state representatives to strip Slovak Jews of their civil rights and property, came into force. Based on later regulation, all Jews older than six years of age had to wear a yellow star. The legislation cleared the way for the deportation of about 71,000 Jews to concentration camps in 1942 and 1944. Slovakia was the only country that paid 500 Reichmarks for every transported Jew, SITA wrote.

Parliament made September 9 an official day of remembrance in October 2001. The day is meant not only to commemorate Holocaust victims, but also to call on the public to fight against all forms of racism, intolerance, xenophobia, oppression and discrimination, SITA wrote.

September 9 became the day of remembrance also thanks to then independent MP Robert Fico, who supported the initiative of then president Rudolf Schuster. Rintel noted that while open anti-Semitism was common prior to 1989, none of the current parliamentary parties make anti-Semite statements, as reported by Sme.

Several other events were held on September 9. The City Theatre of P. O. Hviezdoslav hosted the reading of the names of 999 people transported to the Poland-based Nazi concentration camp Sobibór in March 1942. The event has taken place for the fourth time and is arranged by the B’nai B’rith Tolerancia non-governmental organisation.

Every year famous Slovaks read the list of people from one transport. It is necessary to commemorate this part of history as the victims were not only people deported to concentration camps, but the whole society, journalist Ľuba Lesná, one of the initiators of the event, told SITA.

Another event took place in the SNP Museum in Banská Bystrica, where they laid a founding stone for the Garden of Chaviva Reiková, named after a Slovak Jewish woman who helped people move from Slovakia to Palestine. The SNP Museum also arranged lectures held by museum head Stanislav Mičev and historian Eduard Nižňanský, the TASR newswire wrote.

There were also events in Sereď, where a work and concentration camp was once located, and Zvolen.

The importance of remembrance

Remembering the Holocaust victims is an important tool to suppress the increasing expressions leading to its repudiation, the Foreign Affairs Ministry stated in a press release.

“Not to forget about the horrors of the Holocaust is an urgent challenge also today when in many regions of the world there is flagrant violation of basic human rights on the grounds of race, religion or ethnicity,” the ministry said, as quoted in the release.

According to Rintel, there are two reasons for remembering the Holocaust. First, the personal memories of the survivors and their relatives, which do not let us forget about what happened.
Second, that people should remember what racial, religious, ethnical or national hatred might cause.
“The tragic events of the Holocaust are not only part of our history, but they left us many social and economic problems until these days,” Rintel said in his speech.

Mešťan says that the Museum of Jewish Culture organises commemorative events not only in Bratislava, but also in Poprad (from which the first transport with girls and women left in March 1942) and Sereď.

“We should realise that humankind has not learned [from this mistake] and that the malice is in people,” Mešťan said. “Remembering the Holocaust means to remember what a person did to another person, and to try not to hurt another [group of] people.”