CUSTOMERS will soon see how much food of Slovak origin is sold in shops compared to products from other countries, as a new law will require shops to post this information near their entrances and on their websites. 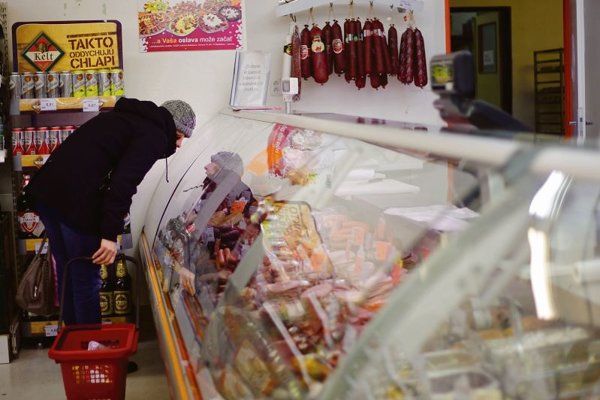 CUSTOMERS will soon see how much food of Slovak origin is sold in shops compared to products from other countries, as a new law will require shops to post this information near their entrances and on their websites.

The Agriculture Ministry published the information in the form of a list on its website on September 5, which contains the names of 61 operators of shops and the percentage of revenue they derived from selling Slovak products in the first half of this year. Similar lists will begin appearing in shops soon. While the ministry says the list should help customers find out how much Slovak food is sold in which shops, critics warn the list lacks clarity and has little relevance for customers.

Based on the idea of Igor Matovič, chair of the opposition Ordinary People and Independent Personalities (OĽaNO) movement, the list will be posted at all retailers with revenues exceeding €10 million. Information in the list will include the five countries with the highest share of products offered in the shop, as well as a list of other retailers and the proportion of Slovak products they offer.

In addition, the retailers will be required to inform the Agriculture Ministry about the proportion of offered products twice a year: by January 31 and by July 31. The ministry will then send the lists to the retailers by February 28 and August 31. The retailers are required to publish the lists within 30 days. Should they fail to do so, they will be fined anywhere from €100 to €100,000, according to the law.

The first list published by the ministry confirmed that less than 50 percent of food sold is Slovak in origin, according to representatives of businesses active in the agriculture and food industries. Yet, the list is only an attempt to address the issue, and it will not solve the current problem with Slovak food, Martin Katriak, chair of the legislative department of the Association of Trade and Tourism (ZOCR), a professional organisation, told The Slovak Spectator. He also questioned the methodology used in its preparation and said that it lacks some basic definitions, like what Slovak food is.

Daniel Poturnay, president of the Food Chamber of Slovakia (PKS), a professional organisation, told The Slovak Spectator that more expensive food items will account for a higher share of food revenues, thus distorting the statistics.

Agriculture Ministry spokesperson Peter Hajnala told The Slovak Spectator that the methodology was done according to the law and the formulation of country of origin in consultation with retailers, so “the published list has informational value,” he said.

The ministry recently proposed some new criteria to define Slovak food, with 75 percent of the ingredients used in a product’s creation mandated to come from Slovakia, although water is not included in the calculation. Every step of the production process is supposed to take place in Slovakia, though there are exceptions for the production of specific foreign ingredients. In cases where a producer is not able to produce food without using foreign ingredients, the 75-percent share is not obligatory. However, any non-Slovak ingredients must be listed.

There are also cases in which food is not produced in Slovakia but its production process involves a final step in Slovakia, which could affect food quality, such as packaging or cutting. In such cases current EU and Slovak legislation considers Slovakia to be the country of origin, the ministry’s report explains.

The Agriculture Ministry’s list is topped by the company Levické Mliekarne, which reported that 100 percent of its revenue came from the sale of Slovak products. Rajo placed second, with 94.2 percent, followed by Novofruct with 94 percent, Koruna with 92.2 percent and Libex with 91 percent. Lidl ranked last, with only a 17-percent share of Slovak products.

Yet, organisations active in the agriculture and food industries say that the list contains producers who sell nothing but their own products. According to Katriak of ZOCR, the list’s top 10 consists of nine producers and only one retailer. Moreover, the majority of the producers only sell their products in certain regions.

Stanislav Nemec, spokesperson for the Slovak Food and Agriculture Chamber (SPPK) added that the list would be clearer if the ministry only included companies whose main activity is trade.

“Producers with their own outlets cannot, in the clear majority of cases regarding revenue from selling food to consumers, compete with retail chains, so it is useless to include them in such lists,” Nemec said.

Retailers’ responses to the new list vary. According to Tesco, which placed 55th on the Agriculture Ministry list, with Slovak products making up 47.2 percent of its revenue, the list has informational value by showing real-life consumer behaviour and how much people actually spend on Slovak products, Tomáš Ferenčák, a Tesco PR executive, told The Slovak Spectator.

Yet, Martina Kovacs, marketing manager of Billa, says the lists will result in a greater administrative burden, adding that “while the producers and distributors do not have to announce the exact origin of food, it will be hard to get objective numbers”.

Billa placed 56th with a 41.5 percent share. Yet, Kovacs says that when filling out the form, 66 percent of the meat products were labelled “Produced in the EU”, for which there is no category.
“Nobody is obliged to tell us from which EU country the product comes, even if it is from Slovakia,” Kovacs told The Slovak Spectator.

Lidl says that they focus on quality and that the geographical origin of the products is irrelevant.

“We choose suppliers to our retail chain based on competition, where the deciding factor is the ability to secure the required quality for the best price and the ability to supply the amount of goods we require, regardless of the country of origin,” Tomáš Bezák, a Lidl spokesperson, told The Slovak Spectator.

Both Kovacs and Bezák said that the lists will only have a minimal impact on customer behaviour.