Old Italians in the National Gallery

THE EXHIBITION’S name, Italian Painting, only reveals some of what you need to know. The works collected date from the 16th – 18th centuries, and with the exception of a landscape by Alessandro Magnasco and the Circumcision of Moses by Giovanni Battista Tiepolo (on loan from the Italian town of Bassano dell Grappa specially for this exhibition), all were culled from Slovak collections. 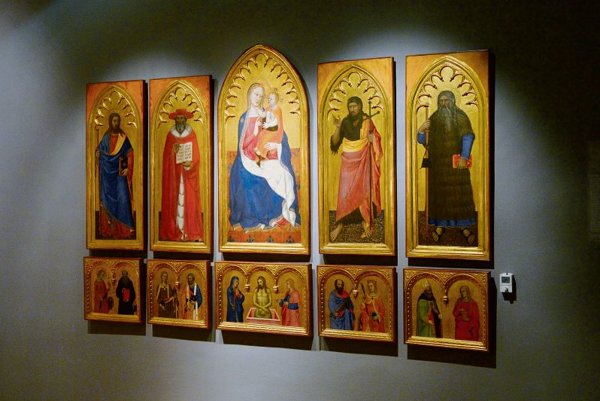 THE EXHIBITION’S name, Italian Painting, only reveals some of what you need to know. The works collected date from the 16th – 18th centuries, and with the exception of a landscape by Alessandro Magnasco and the Circumcision of Moses by Giovanni Battista Tiepolo (on loan from the Italian town of Bassano dell Grappa specially for this exhibition), all were culled from Slovak collections.

The exhibition’s name is also a little deceptive: although paintings form the core of the exhibit, Italian majolica, graphic arts and books are also on display in the Slovak National Gallery’s (SNG) Esterházy Palace. Divided into halls according to date, place of origin and sometimes theme, the collection, curated by Zuzana Ludiková, offers a comprehensive overview of the kind of Italian art that made it to Slovakia.

The works, which can be seen until November 17, come from several museums and galleries, including the SNG itself, the Bratislava City Gallery, several castles and mansions run by the Slovak National Museum, the Mining Museum in Banská Štiavnica, and a selection from a vast collection of majolica at the Červený Kameň Castle. Some works also come from private collections. The collection is rounded out by old prints from the Library of the Bratislava Chapter of the Slovak Archives and the University Library in Bratislava, which show the historical dimension of Italian art in the Slovak environment.

The art scene was different when these paintings were made: it was famous studios or “schools”, rather than individual masters, that were commissioned by wealthy art patrons, and many of the works were copied, signed later or not at all. Moreover, today’s household names, like Leonardo da Vinci, were not as well known back then, and the names of artists, families or studios which are lesser known today were more at the forefront at that time.

The crucial centres of visual art were Florence and Venice, which, thanks to their wealthy merchant and noble families, resulted in other cities like Rome or Milan lagging behind, the SNG’s Vladislav Malast said during one of the guided tours organised by the gallery.

Although it is sometimes not easy to detect the name of the artist, some famous artists are represented here, like Giovanni Battista Piazzetta, Antonio Molinari and Cecco del Caravaggio.
From among those portrayed in the paintings, Elisabeth Szilagy, the mother of Emperor Matthias Corvinus (King of Hungary, Croatia, Bohemia and Duke of Austria) is the most famous, and a painting by Giacoppo Bassano is also the first authentic portrait of a Hungarian ruler. Once widely copied and reproduced, it later slipped into oblivion and its whereabouts were allegedly unknown a mere century ago, according to Ludiková.

The question of how these paintings came to Slovakia can be answered mostly by the fact that in this period art collecting was fashionable for noblemen and the wealthy in general. For example Ján Pálffy was a famous collector who owned 11 of the works exhibited.

The exhibition contains about 80 paintings, 30 graphic art pieces, two majolica showcases and several books and prints. Visitors should be prepared for a host of Biblical scenes. Some of the exhibits have a complicated history and unclear origin, and others were attributed to different painters, and the perceived themes of some have changed over time. Although every work has an information tag, to learn more it is advisable to ask for a leaflet in English in the ticket office, or to buy the catalogue (which costs €24).

The comprehensive catalogue, over 230 pages in length and written in both Slovak and English, explains the exhibited works in greater detail, as well as their artistic and historical context. It includes photos of the works on high quality paper, in addition to forewords by Radoslav Ragač, Tunde Lengeylová and the curator, Zuzana Ludiková.