CLAIMS that a major gas deal between the state and a financial group was masterminded by the latter led to an attempt to sack Prime Minister Robert Fico for what the opposition insists are signs that his government is beholden to oligarchs. But the dominance of Fico’s Smer party in parliament saw the government easily survive a September 19 no-confidence vote which the prime minister called “absurd”. 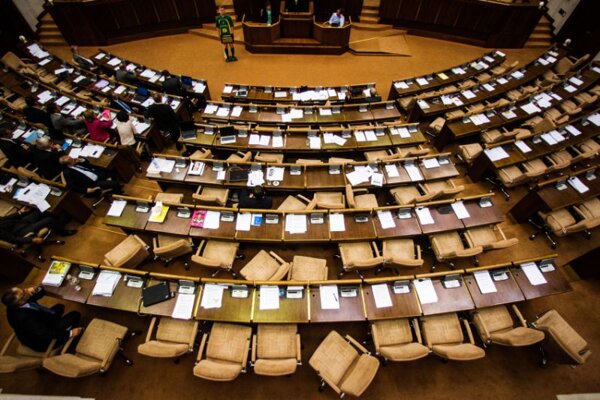 CLAIMS that a major gas deal between the state and a financial group was masterminded by the latter led to an attempt to sack Prime Minister Robert Fico for what the opposition insists are signs that his government is beholden to oligarchs. But the dominance of Fico’s Smer party in parliament saw the government easily survive a September 19 no-confidence vote which the prime minister called “absurd”.

Shortly after the vote, Fico said he is willing to face no-confidence motions in parliament every week in exchange for lower household gas prices, the SITA newswire reported.

Even with the result of the no-confidence vote never in doubt, the parliamentary discussion, which Fico mostly ignored, produced physical clashes leaving one deputy lightly injured alongside accusations of excessive alcohol consumption by deputies of Smer.

“It is a government of lackeys, who serve financial groups,” said opposition deputy Daniel Lipšic, as quoted by the TASR newswire at the beginning of the special parliamentary session on September 17. The session would go on for more than two days.

It was Lipšic who a week ago claimed that the documentation related to the purchase of the 49-percent stake in Slovenský Plynárenský Priemysel (SPP) from the Energetický a Průmyslový Holding (EPH) was masterminded by the company J&T Investment Advisors, which now under a different name is part of EPH. To support his claim, Lipšic referred to the electronic document’s file properties, which indicate it passed through computers tagged as property of J&T Investment Advisors.

Fico has claimed the deal is motivated by an attempt to rein in gas prices and suggested that if right-wing parties were in charge, gas prices could rise by up to 30 percent.

“This session is about how prices of gas for households, the sale of which creates losses, will develop,” said Fico on September 17, as quoted by TASR. “If we wanted it otherwise, we would have to hike prices for household by 26 percent and if we wanted to achieve a moderate profit, then around 30 percent. My government will never allow this.”

After delivering his 45-minute remarks, Fico left parliament’s discussion hall and was absent for much of the forthcoming debate.

In response to Fico’s departure, which the opposition dubbed as “cowardice”, leader of the Ordinary People and Independent Personalities group (OĽaNO) Igor Matovič put up an effigy of the prime minister in front of the speaker’s desk. As described by the Sme daily, the cardboard cutout of Fico spurred a late night skirmish on September 18 between Igor Matovič, OĽaNO deputy Jozef Viskupič and a group of Smer deputies. OĽaNO members, citing a trash container full of empty liquor bottles, accused the Smer deputies of excessive alcohol consumption, as reported by Sme.

“This is where the level of culture of the Slovak parliament shows,” political scientist Miroslav Kusý told The Slovak Spectator, adding that “this is where in tense situations the instincts and emotions sometimes unpleasantly get to the surface”.

Nevertheless, Kusý added that the idea of trying to have the prime minister recalled was justified because issues like the SPP sale call for such steps “even if these cannot be successful due to the parliamentary math”.

Another political scientist, Ján Baránek of the Polis polling agency agrees that such parliamentary debate provides space for addressing issues the opposition dislikes. Yet, as far as the level of discussion is concerned, Baránek said that “it is a reflection of the whole society and the election system we have for the parliament”.

“It [this system] gets these people into parliament,” Baránek told The Slovak Spectator. “This person gets there based on the performance of the party. They do not go through any direct competition in front of voters. All this makes it possible for people who then are fighting in parliament to get in there.”

However, Baránek also said that fighting in parliament is nothing unusual and that similar incidents have occurred in other parts of the world as well. What surprises him is that “there is a higher frequency” of these fights in parliament this year.

Lipšic, the leader of the non-parliamentary NOVA party, insisted that the SPP deal is the “largest corruption, financial and economic scandal in the history of Slovakia”.

Economy Minister Tomáš Malatinský on September 11 denied the claim that the documents were drafted by the seller and said that his ministry only used information from EPH to incorporate it into the government material, which was prepared in cooperation with an advisor. One day later, Malatinský modified his previous explanation, saying that the name of J&T Investment Advisors made it onto the file properties in the final stages when, due to the “commercial sensitivity of the information”, the document was sent to the gas utility so that the SPP could confirm that no sensitive information would be made public, SITA reported.

Malatinský insisted that the material was prepared only by the ministry and its advisors: Wood & Co and White & Case. On September 11, EPH and J&T denied Lipšic’s claims and offered the explanation that Miroslav Haško, who worked as an expert for mergers and acquisitions for EPH before becoming an advisor to the SPP board of directors, was working on “brief information related to the problem” and used his old computer software, which is still registered under his previous employer, J&T Investment Advisors, “and this is how his trace made it onto the document”.

The parliamentary discussion that started on September 17 turned into an all-nighter, wrapping up the next day at 7:00 before restarting at 19:00 and continuing, once again, late into the night.

The conflict between the two OĽaNO deputies and five members of Smer over Fico’s effigy overshadowed the theme of the discussion.

Smer deputies intended to remove the dummy from the discussion hall, and were met with resistance from Viskupič and Matovič. Viskupič claimed that he was attacked by Smer MPs and that he needed treatment from parliamentary medical service. Viskupič also alleged that the Smer deputies were drunk. Even before this incident, some opposition MPs called for alcohol tests to be done on Smer deputies, Sme wrote.

The next day, Smer deputies Jozef Valocký and Ivan Varga denied attacking Viskupič, suggesting that they only responded to physical attacks by Matovič, SITA reported. The parliamentary mandate and immunity committee said that it would request all the recordings from the incident in order to determine what actually happened in parliament.

Speaker of Parliament Pavol Paška said he would not investigate the alleged alcohol consumption that night, suggesting that it is everyone’s individual problem.

Paška has also said that a few half-witted people should not destroy something which has taken decades to build, SITA reported. Paška accused Matovič of lying about the incident, suggesting that recordings from the security cameras contradict his version of events.

When asked how the course of the debate might impact public opinion, Baránek said that it could only empower people’s disillusionment with politics.

“In fact such lack of culture in parliament, when the deputies get drunk and they fight, only confirms the opinions of voters, who think that politics in Slovakia are something dirty and that there are people [in politics] who do not belong there,” Baránek told The Slovak Spectator.

Kusý noted that part of the Slovak public followed the developments with amusement, like a kind of folklore.