SEPTEMBER sees Slovakia on the move. While in Bratislava people were preparing to march under the rainbow colours to promote the rights of the non-heterosexual community, on the other side of the country, in Košice, thousands were expected to come and march in support of pro-life activities. 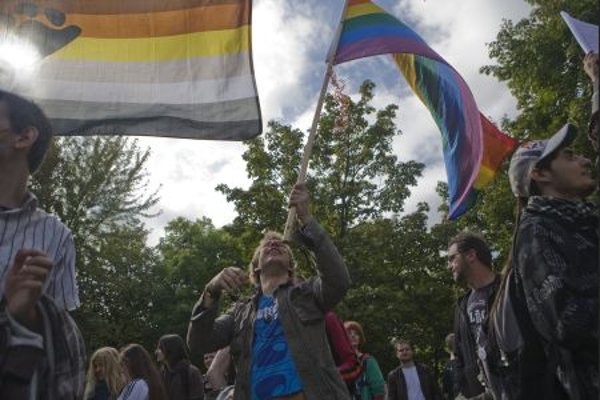 SEPTEMBER sees Slovakia on the move. While in Bratislava people were preparing to march under the rainbow colours to promote the rights of the non-heterosexual community, on the other side of the country, in Košice, thousands were expected to come and march in support of pro-life activities.

Bratislava’s fourth gay pride parade will take place in the autumn for the first time. Organisers expect 2,000 people to join the September 21 march, which culminates a week of events including debates and cultural activities promoting diversity and the rights of lesbian, gay, bisexual, transgender and intersex (LGBTI) people. The events are organised by the non-governmental organisations, the Queer Leaders Forum, the Otherness (Inakosť) Initiative, NoMantinels theatre and the TransFuzia organisation.

“One example of positive changes in Slovakia is that our government finally started to take care of their status by the foundation of an advisory body,” said Martin Macko, director of Otherness. “It is only the beginning of a long way and for the essential social change the general population and its support are needed.”

While several violent incidents have been reported during the previous editions of the Rainbow Pride in Bratislava, the organisers claim that the event has become safer and the attitude of the general public towards the event has changed over the three previous years.

“We have made progress,” the event’s spokeswoman Romana Schlesinger said, as quoted by the SITA newswire. “In 2012 we managed to safely cross the centre of Bratislava.”

There has also been a shift in the communication with the municipal authorities, with Bratislava’s Mayor Milan Ftáčnik officially supporting the event. This year Rainbow Pride should, for the first time, see the appearance of parade floats sporting music and colourful decorations.

Traditionally, numerous ambassadors of foreign countries to Slovakia have supported the Rainbow Pride event. The US Embassy, located in Hviezdoslavovo Square in Bratislava, where the participants gather to start their march, has been flying a rainbow flag to support the event. In a joint statement, 21 embassies pledged support for this year’s event, mentioning the principles of the Charter of the Fundamental Rights of the European Union as well as key sections of the United Nations Charter.

“We believe that everyone, including LGBTI people, should be free to enjoy the rights and freedoms laid out not only in EU guarantees, but also in the Universal Declaration of Human Rights,” the embassies wrote.

The statement was signed by the embassies of Albania, Australia, Austria, Belgium, Croatia, Denmark, Finland, France, Germany, Iceland, Ireland, Luxembourg, Malta, the Netherlands, Norway, Spain, Sweden, Switzerland, the UK, the United States, and the Representation of European Commission in Slovakia. The Canadian Embassy has issued a similar statement of support on its own.

Pro-life activists to march in Košice

The very same weekend, on the other end of the country, another march is slated to back a different set of principles. In the city of Košice, the Conference of Bishops of Slovakia (KBS), together with dozens of other organisations, have organised the National March for Life on September 22.
The mission of the march was to “express the desire for social change that would show in the protection of life of every man”, according to organisers. The organisers also stressed their support for what they call the traditional family based on the marriage of a man and a woman.

Supporters of the march are requesting that laws should protect human life from conception through a natural death, protect and support the idea of family based on marriage between a man and a woman and protect the parental rights for the education of children.

Tomáš Kováčik, a spokesperson for the event, said that as many as 50,000 people were expected to attend. A free-of-charge train was organised to bring those wanting to participate in the march to Košice, as well as several buses, mostly organised by local church parishes. The KBS has used mainly its internal infrastructure to keep believers informed about the event and to encourage them to attend. A letter of the bishops was read during Sunday masses several weeks before the march, encouraging churchgoers to take part.