FOUR active and three former Slovak football players have been arrested as part of a joint Czech-Slovak bust on an alleged match fixing ring with ties to Asia-based gamblers. 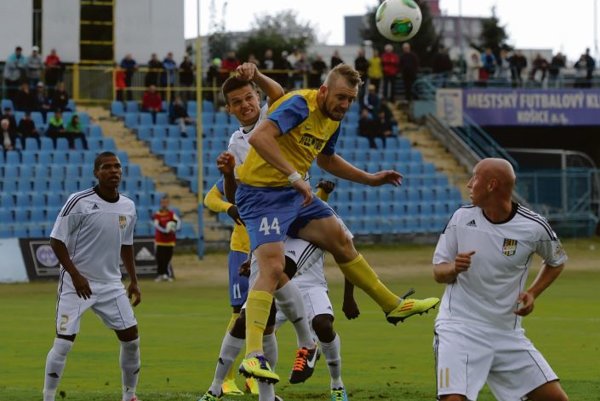 FOUR active and three former Slovak football players have been arrested as part of a joint Czech-Slovak bust on an alleged match fixing ring with ties to Asia-based gamblers.

Slovak and Czech police detained 18 people from both countries during an international operation on September 11. Three Slovak former football players identified by police only as Ivan Ž., Róbert R. and Marián D. were accused of bribery, and four active players of the DAC 1904 Dunajská Streda football team, Michal D., Ivan H., Tomáš H. and Marek B. were accused of accepting bribes, according to Slovak police.

“I know that I made a mistake,” Hodúr told the Šport daily, while declining to speak on specifics.
Police say that there have been at least 19 rigged matches in Slovakia and the Czech Republic, with at least €210,000 used as bribes, and at minimum one win from bookmakers, which totalled no less than €50,000.

All of the accused Slovak bribers, the retired players, and the two active players have pleaded guilty, Special Prosecutor’s Office spokesperson Andrea Predajňová told the TASR newswire. In the Czech Republic, police alleged that 12 current and former players were part of the scheme, and another 20 people were detained for interviews.

The uncovering of the scheme was aided by a Czech football league player who was approached with an offer for match-fixing but declined to be involved. “He contacted the Czech police and the investigation got going,” Police Presidium President Tibor Gašpar told the press on September 12.
The Slovak Football Association (SFZ), which cooperated with the police during the investigation, praised the police’s work in its press release, saying that it is in Slovak football’s interest to eliminate corruption.

“It is a chance to prove that SFZ has eminent interest in prevention from every negative aspect related to football and rightful punishment of delinquents,” Peter Dedík, the SFZ integrity officer, told The Slovak Spectator. “This is the only way to restore football to the social status it had in the past or that it has around the world.”

“I am glad that police, in cooperation with Slovak Football Association representatives, tackled the [problem of corruption] and their job has brought the first results,” Belaník told the Pravda daily. “Even if it currently means negative publicity for football, it is a positive signal for the future that football wants to approach transparently and with a fair play spirit.”

The head of the betting ring, based in Asia, used middlemen in Slovakia to contact football players and offer bribes ranging from €2,000 to €60,000 to fix matches, police said. The criminal group chose matches most likely to appear in offers by Asian online bookmakers.

“It was mainly the former players of our premier football league who approached active players in teams and tried to arrange with them the results of matches, or alternatively the number of goals scored or other possibilities that are on offer through bookmakers,” Gašpar said.

Whether a particular match would be fixed was usually decided 15 minutes into the match when the particular bookmakers released the respective betting options. The middlemen agreed on signs to inform the players about the state of the bet.

If the middlemen showed up in the stands during the game, the players knew the planned payments for a certain result were in effect, Gašpar said. If middlemen did not appear in the stands it was a sign that the bookmaker did not offer the possibility to bet on the match, so football players could play as they wished, he added.

The biggest temptation is the expansion of bookmakers’ offers to include the possibilities of betting on the number of goals scored or bet during the match, Dedík told the Sme daily.

“Another problem is that besides legal bookmakers there is also a network of illegal ones which are impossible to monitor,” Dedík said, as quoted by Sme. “It is possible to bet literally even in a pub.”

Asian online bookmakers are more attractive to criminals since they accept higher bets, reaching around €500, while European bookmakers often top out in the tens of euros, professional gambler Martin Švitel told Sme. Another advantage is that it makes police investigation more difficult, particularly because of different legislation in other countries, Dedík said.

“At least, It has to appear odd to everyone, how it is possible that people from some Asian country are successful with bets on matches played in Slovakia,” Ján Hrivnák, a prosecutor with the Special Prosecutor’s Office, told Sme.

These kinds of corrupt practices in sports have occurred all around the world, therefore it is no surprise that it happened even in Slovakia, Levársky said, as quoted by the Hospodárske Noviny daily.

“One had a not very good feeling about some matches but it is very complicated to prove something to someone,” Belaník told Pravda.

Moreover, even the fact that all bribed players had a contract with DAC 1904 Dunajská Streda is not a big surprise for both Belaník and Levársky, pointing to the team’s alleged financial problems, which led to some delays in salaries.

To prevent such cases, changes in legislation aimed at discouraging potential bribers would be reasonable, Dedík said, adding that prevention via education or better conditions for training in football teams would lower the temptation.

At the top levels of Slovak football, past corruption convictions are rare, with the exception of former SFZ Secretary Vladimír Wänke, who was arrested in March 2007 after accepting a Sk10,000 (about €330) bribe. Wänke had requested a so-called ‘revenue stamp’, allegedly a code name for a bribe, for speeding up registration of the transfer of a football player from an Austrian club to SK Eldus Močenok, the SITA newswire reported.

On November 2010, the Supreme Court confirmed a lower court verdict, which sentenced Wänke to three years and four months in prison for soliciting a bribe. Wänke was also given a €2,000 fine. Police investigated 26 cases of corruption in sports from 2003 to May 2013 and accused 18 people, Gašpar told the Plus Jeden Deň daily website in May. Many of those cases were related to football in Slovakia’s lower divisions.

The Special Prosecutor’s Office focuses more on corruption in government, the judiciary, police and health care, Hrivnák said, adding that he can not say whether there are more corruption cases in sports than in other areas.