PRODUCTION overcapacity in Europe’s automotive market leaves little room for car production in a country like Slovakia to expand. However, there is space for further growth in the automotive subcontracting sector, and the current challenge for subcontractors in Slovakia is to boost their exports. 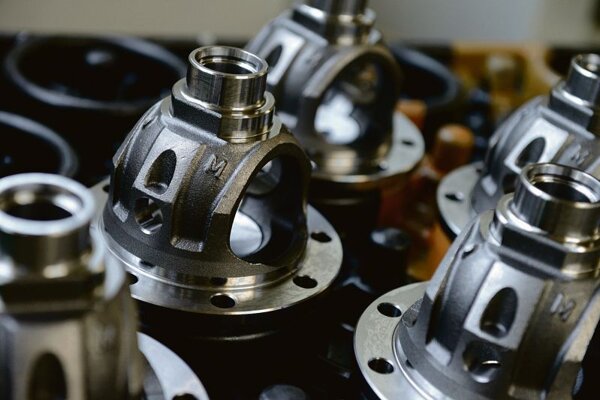 PRODUCTION overcapacity in Europe’s automotive market leaves little room for car production in a country like Slovakia to expand. However, there is space for further growth in the automotive subcontracting sector, and the current challenge for subcontractors in Slovakia is to boost their exports.

Holeček estimates that 60-70 percent of car components from which cars in Slovakia are assembled are produced in Slovakia.

Carmakers in Slovakia confirm that the share of components supplied by local subcontractors is growing and that they are interested in increasing this.

“Last year supplies of parts and materials from Slovakia reached the historically highest share of 44.3 percent of the total volume of supplies,” Vladimír Machalík, spokesperson of Volkswagen Slovakia (VW SK), told The Slovak Spectator, adding that this represents a volume of €2.5 billion, up by one quarter compared with 2011. “Our long-term goal is to have subcontractors as close to our company as possible.”

Holeček of ZAP regards these three factors as important for securing competitiveness in any industry.

“Quality depends especially on people; we need quality and a qualified labour force, which manages to produce [the required] quality, as well as processes secured at 100 percent,” said Holeček.
The second factor is the cost of materials, wages and especially logistics, among others.

“Material costs can be reduced by the reduction of the weight of the product, replacing more expensive elements with cheaper ones, while there is limited space for reduction of personal costs as the price of the labour force may increase in the future, at least with inflation,” said Holeček. “Thus the sector in which costs can be reduced is logistics. And to reduce costs in transportation means especially having subcontractors in Slovakia.”

The third factor pertains to subcontractors being able to respond to client needs quickly. According to Holeček, this is linked to the Labour Code, and the industry needs for this to be as flexible as possible so that subcontractors can fulfil their clients’ demands on time.

Holeček further stressed that the automotive subcontracting industry has moved forward in response to the changing requirements of carmakers, which requires more research and development. In the past, carmakers gave drawings and diagrams to subcontractors, based on which they produced components for them. Now subcontractors have to design, develop and test the parts and modules supplied to carmakers themselves. This has prompted a need for more research and development, and especially applied research, in Slovakia, which could expand the automotive subcontracting industry in the country.

According to Holeček, the so-called multiplying coefficient of production also shows that there is room in Slovakia for further growth of the automotive subcontracting industry.

The study of the automotive industry’s impact on Slovakia’s economy, which Mikuláš Luptáčik from the University of Economics in Bratislava and his colleagues conducted based on data provided by the Slovak Statistics Office, illustrates the multiplying effect of car production. When conducting the study earlier this year, Luptáčik explained that carmakers need goods and commodities worth €3.82 billion, including those that are imported, in order to manufacture €1 billion worth of cars. When imports are eliminated production generates €1.54 billion, which Luptáčik says is still a sound figure, but which leaves room for more local subcontractors.

In this respect Holeček added that having a subcontractor close to a producer brings reduced logistics costs and creates new jobs in Slovakia, as well as all of the resulting effects in paid income and payroll taxes, consumption of goods and so on.

In addition to the lack of R&D, another sore point for the Slovak automotive industry is the country’s unfinished highway infrastructure.

“Out of about 275 subcontractors, as many as 200 are in western Slovakia up to Žilina and Banská Bystrica and only about 70 subcontractors are located beyond,” said Holeček. “This certainly indicates something.”

ZAP sees room for subcontractors in all industrial sectors to develop, i.e. machine engineering, the electro-technical industry and the chemical industry. Holeček also calls for increasing the basic production of items that he believes are illogical to import, like forged pieces and tools.

Industrial associations in Slovakia see room for further participation of local car production, either in Slovakia or abroad, but they also point to the challenges they face.

“I am convinced that Slovak machine engineering firms are able to extend supplies of components for the automotive industry,” Milan Cagala, president of the Federation of Mechanical Engineering, told The Slovak Spectator. “The problem is the fact that the government, when giving impetuses to car investors, did not give conditions for the percentage that Slovak suppliers have to make. The second problem is that large carmakers have long-term contracts with proven suppliers.”

The basic terms that suppliers of car parts must meet include guaranteeing supplies on time and at the required quality.

“There are a lot of companies interested in such supplies and the competition will not allow itself to be pushed from the market easily,” said Cagala.

The Association of the Electro-Technical Industry of the Slovak Republic (ZEP SR) sees a lot of areas in which all three carmakers in Slovakia can cooperate with Slovak suppliers or producers. But according to Vladimír Kalina, general secretary of ZEP SR, more willingness and interest is needed from foreign partners. He also sees the difficulty faced by new car parts suppliers when establishing themselves as a hindrance, citing the long-term relationships between older suppliers and carmakers, and the obligation to keep some production in the carmakers’ home countries.

“It is quite demanding to cut through this competition, especially when you are just starting [in the business],” Kalina told The Slovak Spectator, adding that this whole process is made even more difficult since replacing a proven product with a new one requires obtaining a range of new certifications. “It is quite a vicious circle. This is also why their research and development departments – which we can staff with our people but also create through them products with higher added value, of which a portion might remain here – come to Slovakia only with such complications .”
The Association of the Chemical and Pharmaceutical Industry of the Slovak Republic (ZCHFP SR) is pleased that the automotive industry has established itself in Slovakia.

“It was the cause of the steep development of small and medium-sized enterprises supplying components for cars,” Roman Karlubík, president of ZCHFP SR, told The Slovak Spectator, adding that these involve production of plastics, rubber products and also coatings.

In recent years the association has registered a sharp development of production linked with the automotive industry.

Karlubík regards the current share of local chemical production compared to that imported as adequate and says that it is up to carmakers to choose which subcontractors they want to use.

“With regards to the high share of production of components for carmakers in Slovakia, further growth is limited,” said Karlubík. “Some moves of production linked with the start of production of new models can certainly be expected. But we do not expect any massive changes in a short period of time.”

Karlubík sees the situation as more complicated in the long run, citing the danger of moving car production to countries with better conditions, adding that it was the cheap and qualified labour force and more competitive conditions that drew carmakers to Slovakia in the first place.

“Here we see a risk of further development, especially with regard to the drop in competitiveness of Slovakia, but also the EU, towards third countries,” said Karlubík. “Already this year there have occurred significant drops in the production of plastics due to the increased competitiveness of plastics arriving onto our market from overseas,

from the Middle East as well as the US via intermediate products manufactured from cheap shale gas. Chemicals and chemical products decreased by one quarter, which very clearly indicates the whole situation of the industrial branch within Slovakia, but actually also in Europe.”

According to Karlubík, the Slovak government’s measures, as well as the impact of EU legislation, led to increased taxes, in addition to higher fees for renewable energy sources and steeper costs within emissions trading system.

Some regions in the world do not have these costs, which gives them a competitive advantage. This may result in chemical production or even entire supply chains moving to regions outside the EU, to countries with a cheaper labour force and less demanding environmental requirements, like China, India and others, but also the United States and the Middle East, as energy prices play an increasingly bigger role.