SLOVAKIA has seen a lot of Japanese culture, both traditional and modern, but the recent Souke Kanzaki Ryu performance was the first of its kind. 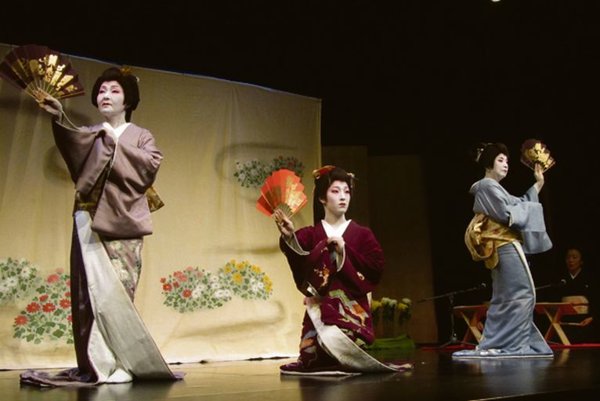 SLOVAKIA has seen a lot of Japanese culture, both traditional and modern, but the recent Souke Kanzaki Ryu performance was the first of its kind.

They performed the Nihon Buyo, “which literally means the Japanese dance”, Japanese Ambassador to Slovakia Akira Takamatsu said in advance of the show.

Nihon Buyo is a traditional form of Japanese theatre and dates back to the 18th century, based on the Noh and Kabuki dramatic forms. It is divided into three types, and the performance that took place on September 13 at the Heineken Tower Stage in Bratislava introduced Jiutamai, the most peaceful variation.

The accompanying classical Japanese music was played and sung by Seikin Tomiyama (who has been proclaimed a “living national treasure of Japan” for his skills on the shamisen), Suishu Takahashi, Kan Fukuhara and Kikuko Sato. After the show’s intermission, traditional instruments including the shamisen, the kokyu, two small drums, one bigger drum and two types of flutes, were introduced and a brief concert followed. The last dance piece, the “Shasta Daisy” was of a slightly different nature and style (Nagauta) - more vivid and dynamic than the performance's first half.

The show was performed by four dancers of the Kanzaki dance school, representing three generations, which opened the possibilities of presenting a bigger scale of stories, life situations and emotions. To a European, the Mai style of Nihon Buyo may seem static, with emotions expressed in subtle, refined ways that may be difficult to interpret those knowing nothing of the symbolism. To clarify matters, dancers often use accessories – like an umbrella or fan – to emphasise their emotional state.

Mino Kanzaki, the oldest representative of the Kanzaki school, has a career spanning more than 50 years. She has become the most respected dancer and teacher of the Jiutamai style and still performs, as the audience in Bratislava well knows.

The production included four Jiutamai-style dances in the first part, a concert of traditional music (introducing individual instruments) in the second part, and a Nagauta-style dance for the final climax.

The evening was part of a series of events meant to mark the 20th anniversary of Slovak-Japanese diplomatic ties. These events enabled locals interested in learning about foreign cultures to explore various genres and forms of Japanese culture like traditional theatre, music, games and now, dance.