ALTHOUGH the postcards published in this series are usually much older, this 1960s picture of Bratislava’s Šafárikovo Square has an undeniable charm. 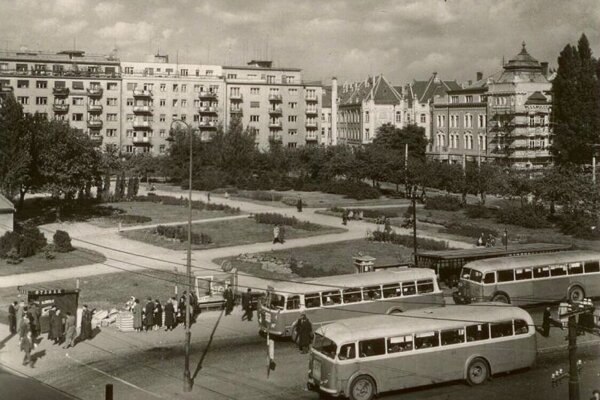 ALTHOUGH the postcards published in this series are usually much older, this 1960s picture of Bratislava’s Šafárikovo Square has an undeniable charm.

It is noteworthy that in almost 50 years, little about “Šafko” – as it is called by locals – has changed. Even more noteworthy is the fact that the big bus stop that occupies the square today existed back then as well.

Kiosks like those in the postcard can still be seen on the square. Those with better eyes can see a kiosk with the sign “Tabak” (tobacco) in the left bottom corner. Next to it, a woman clad in a folk costume is selling goods. Her clothing was definitely not a marketing gimmick: she probably came from the countryside where people tended to wear such folk outfits regularly.

Šafárikovo Square was developed relatively recently. In the urban plan from 1765, it is coloured almost entirely in green, with only a few buildings drawn there. The green colour connoted a field or a natural area, and most of the land up and down the banks of the Danube was similarly undeveloped. In 1820, a town farmstead is mentioned as having occupied the corner of what today is the busy intersection of Štúrova and Dunajská Streets.

The most important construction on this square was perhaps Landerer’s Palace, which was built in 1840 on roughly the same spot as the newer residential apartment buildings seen in the background of this picture. Michal Landerer was a famous typographer and publisher.

In 1873, Landerer’s Palace was converted into military barracks. The structure remained until 1944, when it was seriously damaged during a bombing raid in the Second World War, and later demolished.