CYPRIOT cuisine is like a historical map of Cyprus, with “traces of different nations, which emerged through the country’s rich and sometimes turbulent history”, said Marios Kountourides, the Cypriot ambassador to Slovakia, while preparing Kleftiko, an oven-baked lamb dish with potatoes, seasoned with oregano and salt.

Related: Cypriot cuisine I Appetizer I Salad I Soup I Main dish I Dessert I Other cuisines 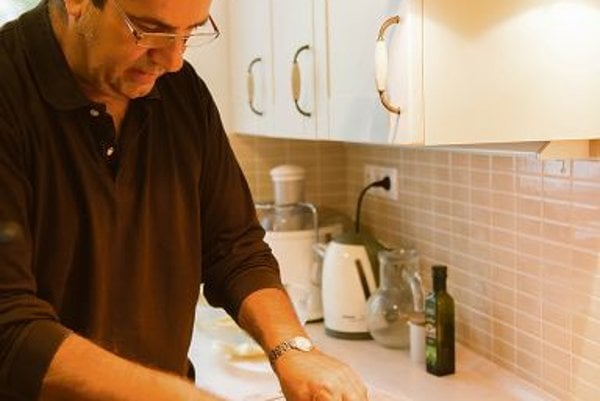 Kountourides believes that it is not just food that speaks volumes about a nation’s culture, but also the way people consume it. According to the ambassador, in Cyprus the host must always cook more food than what his guests are able to consume, as an empty table might imply a lack of hospitality.

“The first thing you hear when you enter a house or a restaurant is the word which in Greek means ‘welcome’, but it also implies that you are becoming one of them and that ‘our place becomes yours’,” Kountourides said when explaining Cypriot hospitality, which he considers a key feature of his country’s food culture.

The wife of the ambassador, Sandrine Kountourides, a French native who has adopted Cyprus as her second home, sliced tomatoes, cucumbers, parsley, onions, peppers and coriander leaves, which are used extensively in Cyprus, to prepare the Cypriot salad, an example of a healthy Mediterranean dish. Olive oil, salt and lemon are used for the dressing instead of vinegar, she explained.

Kountourides has a message for his Slovak friends, who might favour a meat-heavy diet: “pork and coriander go very well together”. The ambassador, however, would be happy if Slovaks also experienced the culinary joys of Halloumi, a mild, salty goat cheese, which he calls the pride of Cyprus.

“Slovakia is not very familiar with this cheese,” Kountourides said, adding that whenever he meets Slovak friends they ask whether Halloumi, which can be consumed raw, grilled or fried, is included in the menu.

The Cypriot ambassador introduced Carob tree oil and syrup for the Cooking with Ambassadors programme with similar enthusiasm, explaining that they contribute to the health of the digestive system.

However, Kountourides jokingly added that it is one thing to describe the healthy Mediterranean diet, but it is another to describe some of the region’s dining habits: “The Cypriots are very lively people who enjoy going out a lot, and long, hot summers contribute to this tendency”.

Early dinners are definitely not common in his homeland, while “in Cyprus you would be looked at a little bit strangely” if you suggested having dinner at 18:00, the ambassador explained, adding that dinner begins at 21:00 or 22:00, or sometimes at 22:30.

Yet, despite the worldwide popularity of fast food, Cypriots are returning to their traditional roots, with Kountourides saying that “the crisis has contributed, in a very ironic way, to a return to the old, traditional ways”.

When asked about his experience with Slovak cuisine, the ambassador instantly recalled bryndzové halušky, potato dumplings with sheep cheese, and the famous “žinčica”, a by-product of this cheese, noting that he had not been warned that consuming too much of the latter can have certain effects on one’s digestion.

“I love soup and I am very lucky because, summer or winter, soup is very much present in your cuisine,” Kountourides said, adding that bean soup, “fazuľová”, is one of his favourites.