FOR ONE WEEK, a 40-meter long model of the proposed Bratislava-Schwechat oil pipeline was placed in the centre of Slovak capital, aiming to draw attention to the issue of its planned route through Bratislava. 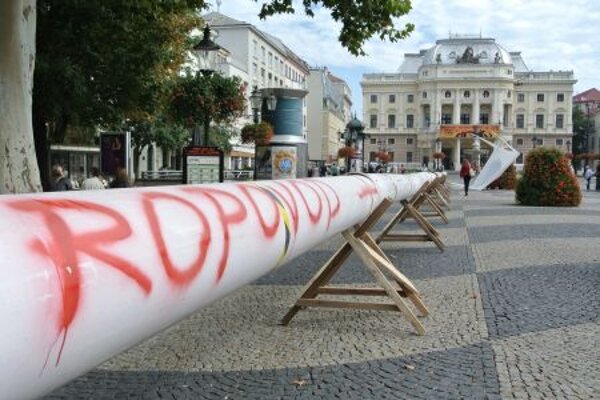 FOR ONE WEEK, a 40-meter long model of the proposed Bratislava-Schwechat oil pipeline was placed in the centre of Slovak capital, aiming to draw attention to the issue of its planned route through Bratislava.

Activists from the Nie Ropovodu civic association placed it in front of the National Theatre, and between September 9 and 13 passers-by stopped to hear news about the plans. Some signed a petition asking for the pipe to be re-routed. Activists told the TASR newswire that they were seeking to show the absurdity of the project and what Bratislavans might have under their homes in the future.

“It is better to see once than to hear [about something from a second hand] a hundred times,” Miroslav Dragun of the Nie Ropovodu told TASR. Dragun claimed that many people stopped at the model, 40 metres long and up to 400 millimetres in diameter, and expressed support or posed questions. Even the mayor of the Old Town Borough of Bratislava, Tatiana Rosová, expressed her support.

However, not all passers-by opposed the oil pipeline, with some opining that it was economically useful and others confessing they do not know enough to take a clear stance.

After the event in the Hviezdoslavovo Square ended, activists planned to bring the re-routing petition to the September session of Bratislava City Council to give to Economy Minister Tomáš Malatinský. The construction of an oil pipeline between Bratislava and Schwechat in Austria was originally slated for discussion during September’s city council meeting, but that plan has since been put on hold.

Representatives of Bratislava Self-governing Region (BSK) and those of the Nie Ropovodu (No to the Oil Pipeline) civic association met Bratislava Mayor Milan Ftáčnik on September 12. Apart from the public debate, Malatinský’s scheduled appearance at the September city council session was also postponed. Bratislava councillors denied a request back in June that the pipeline lead through the so-called City Corridor, while also asking government to re-route the oil pipeline through the so-called Carpathian Corridor, bypassing the capital. They wanted Malatinský to come in September and inform them on the state of the project. Malatinský has said he will attend the October 24 instead, TASR wrote. A final decision on whether the pipeline will pass through Einsteinova and Dolnozemská streets in the Petržalka borough of Bratislava, or bypass the capital, is slated for this year.