Faces of the Danube: both pleasing and scary

“Moon after moon rolls the thundering Danube, a rigid castle standing on a tall rock glows upon the water...” 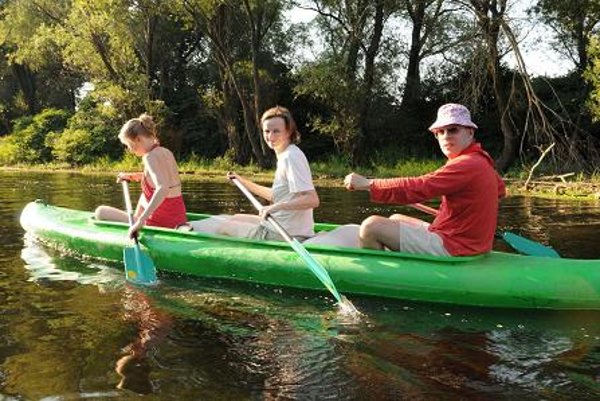 “Moon after moon rolls the thundering Danube, a rigid castle standing on a tall rock glows upon the water...”

Crush Him by Samo Chalupka

Every child in Slovakia has to memorise the words of one of the most famous national poems, and every tourist who has ever seen Bratislava knows the words to be a perfect description of Slovakia’s capital and its majestic river view.

The Danube is not an ordinary river: its power has become a symbol for Slovakia and its influence stretches across Europe. It is the only river in the world to connect four capital cities: Vienna, Bratislava, Budapest and Belgrade, and it has formed the border between countries many times throughout history.

The Danube was first used as a border in the 1st century, as part of the Limes Romanus protecting the Roman Empire from barbaric Germanic tribes. Nowadays it divides nation from nation: Romania from Bulgaria; Croatia from Serbia. It also creates a firm, natural border between Slovakia and Hungary, where the areas surrounding its banks have typically been fraught with nationalistic tensions. However, the river itself, in its strength and beauty, is more a source for harmony than tension.

“I am a very introverted person, but when I sit near the Danube, I think of everything but me and wonder how peaceful it is when civilisation meets nature,” said Lucy Wright, 22, a university student from Brighton, who has made a spot near the Danube her favourite place in the city.

Civilisation has met the river a few times in the past, but what may be a whole lifetime for a human is but a slight moment for the Danube. Its deep waters hide countless secrets, where measurements are made on a different scale.

For half a million years, the largest river island in Europe, Žitný Ostrov, has been entirely consumed within the river’s breadth, a direct legacy of the sea that once covered this area. There is also an invisible process happening all the time under the island, which stretches more than 80km from Bratislava to the area of Komárno.

According to Peter Malík, the head of the Department of Hydrogeology and Geothermal Energy at the State Geological Institute of Dionýz Štúr, “the island is sinking, because of the constant movement of the earth’s crust. Therefore it is losing stability and creates gaps, which the river fills up with gravel. This process is actually loud and if you decide to paddle in the river and stay quiet for a while, you will hear the stones rolling under the water”.

“If you dug deep enough anywhere on Žitný Ostrov, you would find drinking water,” Malík said.

The island is the largest reservoir of water around the Danube: 25,000 litres of drinking water per second circulate underground, with only 4,500 litres ever used.

But the Danube is not only a salvation; it can also be a threat. Under the rule of Maria Theresa, in the 18th century, engineers changed the river’s course, building dams and embankments and attempting to push Europe’s largest inland river delta underground. In the past, the river started to divide in Hainburg, but there are only a few of the branches left today. It means that the pressure of 10,000 litres of water remains under the island, occasionally rising dramatically to the surface.

Many of the significant floods caused by the Danube can be attributed to its deep underwater life. The most famous came in 1850 when the whole of Bratislava was flooded by water and ice floes. An attentive visitor will no doubt notice the signs on some old city buildings, which indicate how high the water rose on the precise date of February 5, 1850. The most prominent can be found on the corner of the Primate’s Palace or on the Old Town Hall.

The Danube not only provides drinking water to the people of Bratislava, but also it offers residents many leisure-time opportunities. The majority of people living near the river make good use of its beaches, which are, of course, not white sanded and massed with tourists, but intimate, secluded and enjoyable. These tranquil spots can be found along the river’s length, and its banks also provide cycle paths, great fishing opportunities and hiking routes. It is also possible to explore the river or one of its branches (the most popular is Malý Dunaj) either in small kayaks or canoes. Less active visitors may also appreciate the possibilities to hop on a bigger boat and head off for Vienna. You can see the Slovak and Austrian capitals while never leaving the beautiful surrounds of the Danube itself.