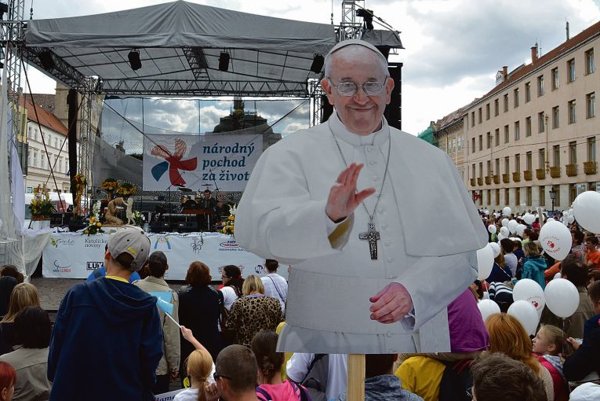 While numbers at such events are always difficult to verify, organisers claimed that 80,000 people took part in the rally and insisted that it was not directed against anything but rather in support of the protection of life and family. However, some banners in the crowd clearly voiced opposition to abortion and euthanasia. Called the National March for Life, the rally was organised by the Conference of Bishops of Slovakia (KBS) and dozens of other organisations.

The last time such a large number of people gathered in Košice’s city centre was during Pope John Paul II’s 1995 visit, according to the Sme daily. Organisers said the turnout far surpassed their expectation of 50,000.

“The people really came because they realise the need to protect every man from conception until natural death, as well as family based on the marriage of a man and a woman as the best space for new life,” event spokesman Tomáš Kováčik told The Slovak Spectator. “They are not afraid, they came out of themselves, of their comfort, they sacrificed time and money to stand up for what is important and irreplaceable by property, luxury or other things.”

To boost turnout, the KBS mobilised its internal infrastructure, as a letter from bishops was read during Sunday masses several weeks before the march, encouraging churchgoers to take part. Numerous parishes and local organisations organised buses that drove people from all around Slovakia to Košice, and the Life Forum pro-life NGO even organised a free-of-charge train, which departed from Bratislava and stopped at major stations along the way to Košice.

People from Poland, the Czech Republic and Hungary attended the march as well, according to media reports.

Marchers endorsed the Manifesto of the National March for Life 2013, in which they expressed three main beliefs: that the life of every person is priceless and should be unconditionally protected from conception to natural death, that family is based on the marriage of a man and a woman and should be protected as such, and that care for children is the right and responsibility of parents as children have the right to parental protection, education, and care.

“Aware of our responsibility in the past, today, and for the future of our children and all the society we walk here today peacefully, but at the same time resolutely and clearly,” the manifesto reads.

The manifesto called on parliament and the government to create legislative proposals in support of their values called the legal protection to marriage between men and women “a unique and irreplaceable bond that respects the natural law recognisable by reason”. It also called on the government to create support mechanisms and economic and social conditions that would allow families to have children without worries, and to actively support institutions focusing on help to families in need and pregnant women.

“Pope Francis sends you a message: Never let anyone stop you from promoting the culture of life,” Sme quoted Giordana as saying.

A variety of politicians offered support to the march as well, among them representatives of the Christian Democratic Movement, as the party’s MEP Anna Záborská led one of the side events together with Ordinary People and Independent Personalities (OĽaNO) MP Richard Vašečka. Presidential candidates Ján Čarnogurský and Radoslav Procházka participated and encouraged supporters to do the same.

The National March for Life might be organised in the future again, Kováčik admitted, but said that “we would be happy if the reasons for repeating it vanished”. That means the government would deal with issues of family and life protection in legislative way, he continued.

Kováčik pointed to the high turnout in Košice, plus “dozens of thousands” people watching on TV, saying that “political representatives cannot leave this without response and must take it seriously as a message for their work”.

The high attendance “provides us with a strong mandate to promote the protection of man and family also in political and civic way”, Kováčik said, but did not specify any further steps the life movement might plan to take in the future.

Concerns that far-right supporters would attend the march and try to make themselves visible among the crowd were voiced prior to the event. The far-right party Ľudová Strana Naše Slovensko, using its typical rhetoric, encouraged its supporters to participate in the march “to show they will no longer look at the liquidation of European nations and the advent of the new world order”.

The organisers of the march distanced themselves from any expressions of extremism, saying that all attempts to promote racist or other extremist attitudes at the event would be considered a violation of the security of the march participants. While the flags of some extremist movements appeared among the crowd, according to Sme, no serious incidents occurred.

Two days before the event, organisations promoting the rights of non-heterosexual people called on the march organisers, as well as the Catholic Church representatives, to distance themselves publicly from what they called a hate speech against LGBTI people in the September 19 parliamentary speech by MP Štefan Kuffa, as Kuffa is a supporter of the pro-life movement.

Neither the Church nor the National March for Life organisers did so.