COLOURFUL parade floats appeared for the first time this year at Slovakia’s so-far-only gay pride march in Bratislava, symbolising the organisers’ belief that conditions for sexual minorities in the country are changing for the better. But the event was also marked by what its organisers have condemned as hate speech, which came directly from parliament. 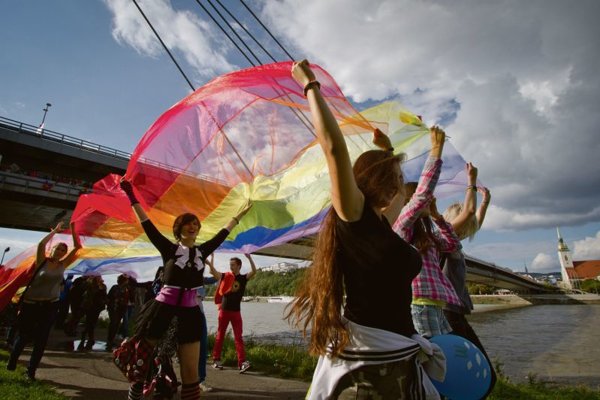 COLOURFUL parade floats appeared for the first time this year at Slovakia’s so-far-only gay pride march in Bratislava, symbolising the organisers’ belief that conditions for sexual minorities in the country are changing for the better. But the event was also marked by what its organisers have condemned as hate speech, which came directly from parliament.

Lesbian, gay, bisexual, transgender and intersex (LGBTI) people, as well as supporters of the Rainbow Pride Bratislava event, marched the streets of Slovakia’s capital for the fourth time, with the 2013 edition being the first to take place in autumn rather than in early summer. Slovakia’s second biggest city, Košice, is organising its first LGBTI pride march, scheduled for one week later, on September 28.

With up to 1,000 people having gathered in Bratislava’s Hviezdoslavovo Square on September 21 to march under the colours of the rainbow, attendance was considerably lower than the 2,000 organisers initially expected. The march culminated a week of events, including debates and cultural activities promoting diversity and the rights of LGBTI people. The events were organised by the following non-governmental organisations: the Queer Leaders Forum, the Otherness (Inakosť) Initiative, NoMantinels theatre and the TransFúzia organisation.

“We consider today’s march the most successful so far, from the viewpoint of the atmosphere in society, and also security,” Rainbow Pride spokesperson Romana Schlesinger told journalists after the march, as quoted by the TASR newswire.

The parade’s participants marched the streets of central Bratislava undisturbed, with no serious incidents reported, unlike in previous years.

Putin ‘makes an appearance’ too

This year’s Rainbow Pride Bratislava saw participants reacting to developments affecting the LGBTI community in Russia, with cardboard cutouts of Vladimir Putin’s head appearing among the banners carried by the crowd.

Amnesty International Slovakia’s delegation joined the march and supported it in advance with an official statement in which it referenced the recent human rights issues faced by LGBTI people in Russia, whose government passed a law that imposes fines for promoting “propaganda of non-traditional sexual relations”, which it says could morally corrupt children, according to Amnesty International.

“By passing such a draconian and homophobic law the authorities only created space for violence against these persons and raised the atmosphere of intolerance in the country,” Amnesty International Slovakia’s spokesperson Jana Vargovčíková said.

Amnesty International Slovakia circulated a petition during Rainbow Pride Bratislava calling to cancel these laws and to express solidarity with LGBTI people in Russia.

The organisers of Rainbow Pride Bratislava believe that the public attitude in Slovakia is becoming more favourable towards the LGBTI community. Their belief is backed by the results of a survey from July 2012, conducted by the Otherness Initiative in cooperation with the Focus polling agency, showing that 9 percent of the respondents definitely agree with registered partnerships for non-heterosexual people, while 38 percent said they somewhat agree.

The number of people who have no problem with registered partnerships thus grew by 5 percentage points compared to 2009, the organisers of the Rainbow Pride suggested.

Slovakia’s government has also “finally started to deal with the position” of LGBTI people in society, and has even established an advisory body toward that end, Schlesinger said.

However, the organisers admitted that the Rainbow Pride event was taking place amid a campaign of unprecedented hate against LGBTI people.

In early September 2013 the Foreign Ministry, which is responsible for the human rights agenda in the current cabinet, revealed that it has become the target of an organised campaign to spam the e-mail addresses of Foreign Minister Miroslav Lajčák and other ministry officials, and to deliver “personal invectives, rough offences and hateful blackmail” that “fanatical opponents of human rights in Slovakia” had been sending to the secretary of the government’s Human Rights Council.

The ministry announced that if the campaign does not stop, they will take appropriate legal steps, including criminal complaints about specific people.

The hate-fuelled campaign was started after the draft strategy for the protection and support of human rights in Slovakia, which includes a section on LGBTI rights, was presented, according to Rainbow Pride organisers.

Some who have publicly supported the Rainbow Pride or agreed to participate, were targeted with hate mail as well, according to its organisers, which caused some of them to back out of the event.

Kuffa against LGBTI once again

In their official statement, the organisers also reacted directly to opposition MP Štefan Kuffa (OĽaNO), who paraphrased the Bible in parliament on September 19, saying that “it would be better for you if they hung a millstone on your neck and threw you into the water. It would be better for you than when you scandalise one of these little ones”. Kuffa suggested that LGBTI people are morally corrupting children, repeatedly using words like “monstrous” and “terrible”.

The LGBTI community said that of all the verbal attacks made against them by Slovak politicians, this “crossed the line”, interpreting his words as suggesting death for those who tell children that two same sex people can love each other. Rainbow Pride organisers, together with other human rights organisations, condemned Kuffa’s statements, and called on the Catholic Church and the organisers of the pro-life march in Košice (held on the same weekend as the Rainbow Pride event) to distance themselves from such statements.

Known human and LGBTI rights activist Hana Fábry sent an open letter to Kuffa on September 20, in which she said she would “seek all accessible legal means in order to get an apology” to herself as well as to all LGBTI people and their close ones, since his statements “not only pardon but also initiate any potential psychological and physical violence”.

Kuffa, who has spoken out against LGBTI people in parliament in the past, said he would not apologise for his statements.