TAX COLLECTING in Slovakia is far from a fine art, with some of the biggest problems occurring with the value added tax (VAT). In reaction, the Finance Ministry has declared a fight against tax dodging as it seeks to implement new measures for fighting tax fraud and evasion – including a so-called blacklist of businesspeople and firms with large outstanding value added tax bills. 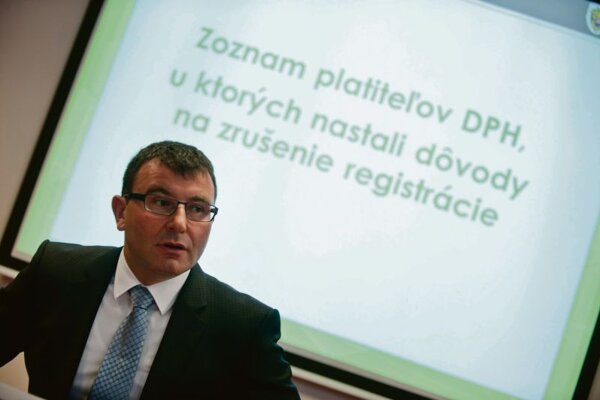 TAX COLLECTING in Slovakia is far from a fine art, with some of the biggest problems occurring with the value added tax (VAT). In reaction, the Finance Ministry has declared a fight against tax dodging as it seeks to implement new measures for fighting tax fraud and evasion – including a so-called blacklist of businesspeople and firms with large outstanding value added tax bills.

The Financial Administration on February 4 made public the “List of VAT Payers in the Case of Which There Have Arisen Reasons for Cancellation of Registration [as VAT payers]”, as its official name reads, of over 1,400 businesses. Since then the number has grown to include more than 7,700 companies in a daily updated list.

This way, business entities can verify the credibility of potential business partners. Based on legislation passed to fight tax dodging, buyers, providing they are themselves VAT payers, act as guarantors for payment of VAT on goods they purchase if their supplier fails to pay and the buyer had sufficient reason to know this might happen. Macíková specified that since the list started being published this has happened only one time so far.

According to the Finance Ministry, this list should help to separate legitimate VAT payers from so-called white horses – entities used to dupe others into participating in fraud schemes. Ministry officials believe that the plan targeting tax evasion, which was launched in 2012, is bearing fruit, as the drop in the VAT collection rate was halted, Radko Kuruc, the spokesperson of the Finance Ministry told The Slovak Spectator.

The blacklist has been welcomed by the business community.

“I perceive it positively as this is another partial source of information to check the credibility of trade partners,” Róbert Kičina, executive director of the Business Alliance of Slovakia (PAS), told The Slovak Spectator. “Simultaneously, the threat of being published in such a list motivates businesspeople to meet their obligations towards the state more meticulously.”

Kičina sees a problem in that businesses that appear on the list can only be removed after a year. He considers this too long.

On the other hand, Peter Pašek, managing director of Accace, a company providing accounting and reporting, tax advisory and other services, told The Slovak Spectator he thinks the one year period is adequate.

Another problem, according to Kičina, is that such lists are not interconnected, meaning that when a business entity wants to check a trade partner, it has to visit several websites.

“It is necessary to centralise data on non-payers or law violators at one single place in order to make searching for information about a company simpler,” said Kičina.

For Accace the biggest problem when conducting tax audits on purchasers is that tax offices do not work with the relevant register when checking whether they qualify for a VAT deduction. The introduction of electronic filing of check reports, effective in January 2014, could solve the problem if the financial administration system is set up properly, he said.

“It means that if the financial authority’s information system highlights taxpayers who deducted the VAT compared to entities being in the relevant register which do not report the relevant transaction in the check report, or which failed to pay the relevant tax, then the introduction of check reports can help in the practical application of this concept,” said Pašek.

When assessing the effect of the list so far, Pašek said: “In practice we have not reported a case for which the financial authority would apply the concept of a tax guarantee to any of our clients. However, according to our unverified information, in the Slovak Republic only one case of this type has been reported – it proves that, in practice, the system of the relevant concept doesn’t really work. Just the above stated introduction of check reports could lead to an enhancement in the application of these registers.”