ASPIRANTS for top jobs in Slovakia’s eight regions officially called “higher territorial units”, or VÚC in the Slovak acronym, had a September 30 deadline to submit their candidate lists for the elections. Of the 66 candidates who are running for the VÚC president job only five are women. Pundits expect the most intriguing race to be in Bratislava Region, where the ruling Smer is most likely to clash with opposition-backed candidates, and which has the highest number of candidates, followed by Banská Bystrica Region, the TASR newswire reported. 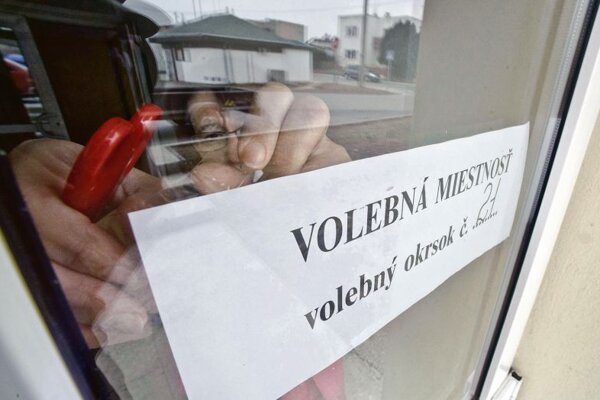 ASPIRANTS for top jobs in Slovakia’s eight regions officially called “higher territorial units”, or VÚC in the Slovak acronym, had a September 30 deadline to submit their candidate lists for the elections. Of the 66 candidates who are running for the VÚC president job only five are women.

Pundits expect the most intriguing race to be in Bratislava Region, where the ruling Smer is most likely to clash with opposition-backed candidates, and which has the highest number of candidates, followed by Banská Bystrica Region, the TASR newswire reported.

As for the technicalities, Slovakia’s statistics authority will use a new information system for the first time in order to ease the election-related workload for 60,000 people who will be processing the election results, with Slovak Statistics Office Chairwoman Ľudmila Benkovičová saying that it will be possible to use the system for all the other elections as well, SITA newswire reported.

The first round of voting in the elections, which four years ago attracted only 22.9 percent of the eligible voters, is slated for November 9, while the candidates running for VÚC president need to harvest 50 percent of the vote in order to win the race. If not, the two best performing candidates from each region progress to a November 23 runoff. Voters will also choose deputies to regional parliaments, with the numbers depending on the size of their election district.

Unenthusiastic as voters may be, VÚCs handle more than €1 billion in state funds each year and have decision-making powers in education, social services and public transport, and oversee the maintenance of lower category roads, while coordinating inter-regional and cross-border cooperation and tourism.

The VÚCs are funded by taxes paid directly to the regions, including personal income and motor vehicle taxes as well as through grants from central government ministries and European structural funds.

Twelve candidates have submitted their bids to run for the top post in Bratislava Region, where incumbent Pavol Frešo, a nominee of the Slovak Democratic and Christian Union (SDKÚ), will run with the support of the KDH, Most-Híd, SMK, SaS (Freedom and Solidarity) and the Civic Conservative Party (OKS), as well as the Green Party, and take on Smer nominee Monika Flašíková-Beňová. Daniel Krajcer of the non-parliamentary NOVA party, Jaroslav Paška, the nominee of the non-parliamentary Slovak National Party (SNS), Oskar Dobrovodský of the Nation and Justice – Our Party and Rastislav Blaško, an independent civil candidate, will run as well, as will Zdenka Beňová of People’s Party – Our Slovakia (ĽSNS), Anton Čulen of Magnificat Slovakia, Gabriel Karácsony of Direct Democracy, Peter Marček of the Party of Citizens of Slovakia, Karol Ondriáš of the Communist Party of Slovakia (KSS) and Roman Ruhig of the New Parliament party.

In the Bratislava VÚC, 293 candidates are running for 44 posts, and 15,540 foreigners with permanent residence will be eligible to vote.

Eleven will bid for the top post in Banská Bystrica Region, with 10 as nominees of political parties and one running as an independent candidate. Ondrej Binder is running as an independent while Ladislav Fízik is running on behalf of the Agrarian Party of the Countryside; Pavel Chovanec for the party Úsvit and Andrea Jenčíková is backed by the party New Parliament. Ľudovít Kaník is backed by the SDKÚ, Most-Híd and SaS. Karol Konárik is running for the SNS and Marian Kotleba for the ĽSNS. Incumbent Vladimír Maňka is running for the coalition of Smer, KDH, the Party of Hungarian Community, Party of Modern Slovakia, HZDS, Movement for Democracy and the Green Party. Emil Samko is running for the Christian People’s Party and Jaroslav Sekerka on behalf of the Communist Party of Slovakia (KSS). Chovanec, Kotleba, Maňka, Samko and Sásik also ran in the previous elections, according to SITA newswire.

As many as 344 citizens will run for deputies of the local parliament, 58 of which are running as independent deputies, while the rest are backed by one of the 25 political parties or coalitions.

Ten candidates are running for the top post in the Košice VÚC, including Rudolf Bauer, who is backed by the Conservative Democrats of Slovakia (KDS), independent candidate Jaroslav Džunko; Marek Ďuran is backed by the ĽSNS; Vladimír Gurtler is backed by the Party of Seven Just (7 Statočných), independent deputy Jozef Holečko and Ivan Kuhn are backed by the Civil Conservative Party (OKS). Rastislav Masnyk is running with the support of SaS and the SDKÚ, while Dominika Palaščáková is supported by NOVA and Lukáš Sisák by the KSS. Incumbent Zdenko Trebuľa is supported by Smer, Most-Híd and the Hungarian Coalition Party (SMK).

Twenty-six political parties and 73 independent candidates submitted their candidacy lists while all together 330 candidates are running for parliamentary seats.

Seven candidates will run for the top regional posts, with incumbent Milan Belica supported by Smer, SNS and the Agrarian Party of the Countryside. He has been in his post since 2001. Tomáš Galbavý, an ex-deputy for the SDKÚ, is supported by his own party with the backing of Most-Híd, NOVA, OKS, SaS, the SDKÚ and SMK. Peter Oremus is running as an independent candidate. Regan Belovič is running for the Party of Seven Just, which was registered by the Interior Ministry on the day of the deadline for submitting the candidate lists. Viliam Mokráň has a history of unsuccessful bids, but is running again this year. Stanislav Kováč and Róbert Dyk are running as well.

In Nitra Region as many as 255 candidates will run to get into the regional parliament, competing for 54 deputy seats.

Nine candidates have submitted their lists for the Prešov race, where Dorota Bujňáková is being nominated by the non-parliamentary New Parliament party; parliamentary deputy Ján Hudacký is backed by the KDH, the SDKÚ and Most-Híd. Hudacký reached the second round four years ago only to lose to Peter Chudík, who is running again with the support of Smer, Our Region and the Party of Modern Slovakia. He has held the post for 12 years. Other candidates are Vladimír Klein, backed by the ĽSNS, independent candidate Anton Korba, and Jozef Mihalčin, who is backed by the Slovak People’s Party. The Slovak Communist Party is running Štefan Straka, while the Party of Seven Just nominated Ľubomír Vasilišin.

All together, 461 candidates will run to get elected to the regional parliament, of which 81 are independent candidates and the rest were nominated by 28 political parties as two coalitions have emerged.

The candidate lists came from 16 political parties and 93 independent candidates. All told, 300 candidates are competing for 45 seats in the regional parliament.

In the governor’s race Juraj Blanár is backed by Smer and Miroslav Mikolášik is backed by the coalition of the KDH, Most-Híd, the SDKÚ and SaS. Ivan Pavlisko of the ĽSNS and Juraj Pavlovič of the KSS will run as well, along with independent Igor Ryban.

While the race for the top job is less crowded in Žilina, 333 candidates will compete for 57 seats in the local parliament. The incumbent Blanár has been governor since 2005.