IN MAY the State Institute for Drug Control (ŠÚKL) banned the re-export of Lyrica, a drug for treating neuropathic pain and seizures. In a pattern that has occurred several times afterwards, the ban was meant to guarantee the availability of drugs for patients in Slovakia. Pharmacists are now pushing for permanent legislation governing the re-export of certain medicines. 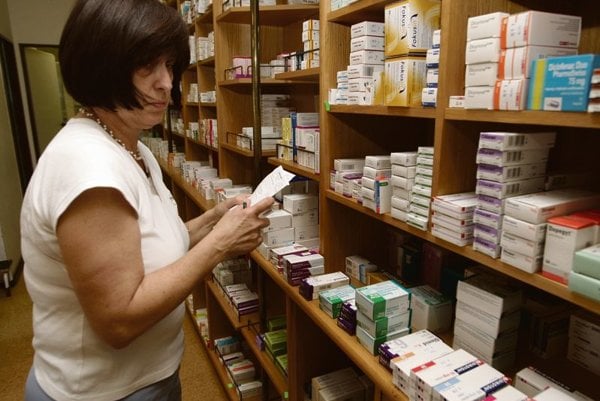 IN MAY the State Institute for Drug Control (ŠÚKL) banned the re-export of Lyrica, a drug for treating neuropathic pain and seizures. In a pattern that has occurred several times afterwards, the ban was meant to guarantee the availability of drugs for patients in Slovakia. Pharmacists are now pushing for permanent legislation governing the re-export of certain medicines.

“For the time being re-export [of medicines] is reaching such dimensions that it is almost impossible to secure some medicines for Slovak patients,” Ondrej Sukeľ, the first vice-president of the Slovak Chamber of Pharmacists (SLeK), told The Slovak Spectator.

Some distribution companies buy selected medicines from pharmacies and re-export them. If the price of a particular drug in Slovakia is €1,000 and in Germany it is €1,600, the margin is big enough for a distributor to make a generous profit on the deal, the Zdravotnícke Noviny, a health-care-focused weekly, wrote on September 5. Pharmacies in Slovakia have been able to sell medicine to distributors since December 2011.

Experts estimate that drug sales in Slovakia amount to about €1 billion annually, with re-exports making up as much as 30 percent of the revenue. Drugs from Slovakia are commonly re-exported to Germany, the Czech Republic or Scandinavian countries. These are usually drugs that are prescribed by doctors and covered by health insurance.

“The unavailability of medicines as a consequence of parallel trading with medicines is not exclusively Slovakia’s problem,” Valéria Pernišová, ŠÚKL spokeswoman, told The Slovak Spectator. “This problem occurs in most EU member countries and is linked with differing requirements for regulation of the medicine policy in the given country.”

Slovakia is the only country in the European Union with domestic legislation allowing it to ban the re-export of medicines. ŠÚKL makes this decision based on cases where Slovak citizens’ health or life could be endangered by a shortage of certain medicines.

Distribution companies are obliged to report their medicine export plans to ŠÚKL. It monitors these announcements by distribution companies and analyses potential impacts of such exports on availability of medicines, Pernišová told The Slovak Spectator. If the export of a given medicine exceeds its import to Slovakia, by which its availability for Slovak patients may be endangered, the decision goes to senior officials at the Health Ministry responsible for related treatment sectors. They are asked whether this re-export might endanger the provision of health care in Slovakia. If they confirm it will, ŠÚKL blocks the export.

So far ŠÚKL has not allowed re-export of medicines for treatment of epilepsy, cardio-vascular diseases, neurological diseases and heart attack and other diseases for which there was no therapeutic alternative.

The Slovak Chamber of Pharmacists sees re-export of medicines from Slovakia as a serious issue, which has grown in the past two years.

“Re-export potentially touches upon all medicines which have lower prices in Slovakia than in other EU member countries,” said Sukeľ, “But the problem occurs especially in cases of original drugs [contrary to generics] without any available alternative.”

Based on information from SLeK, Zdravotnícke Noviny wrote that about one half of pharmacies sell drugs to distribution companies. The weekly has identified that the re-export involves at least 20 financially demanding drugs, for example for treatment of oncologic, psychiatric, neurological diseases, as well as asthma, epilepsy and others. Most are serious diseases where treatment must be consistent and for which there are no other alternatives. Tibor Czuľba, SLeK’s president, said that there have been times when it has taken him as long as three weeks to obtain medicine for a patient, even though based on the law on medical drugs a pharmacy should secure a drug which it does not have in stock for its patient within 24 hours.

SLeK proposes legislation that would ban pharmacies from selling medicine back to distribution companies.

“This possibility is part of a paragraph defining pharmaceutical care,” said Sukeľ. “It is logical that trafficking in medicines has nothing in common with [providing] care.”

ŠÚKL agrees, adding that the main mission of a pharmacist is to provide medical care and not to substitute distribution activities, Pernišová said.

Adam Hlôška, the general director of the section of pharmacy and drugs policy of the Health Ministry told Zdravotnícke Noviny that the Czech Republic adopted a similar law at the end of 2012, but that it has not proved useful in practice and that the situation there is worse than in Slovakia.

SLeK also wants to intensify ŠÚKL’s regulatory role. Whereas now exporters can sell drugs abroad unless ordered not to by ŠÚKL, the pharmacists are asking that exporters receive permission from ŠÚKL for every export.

Parallel trade is an EU-wide problem

The market for prescription drugs in the EU follows the principles of free trade and free movement of goods. Other countries face the problem of re-export or parallel trade of medicine too, and some are asking whether this phenomenon should be solved at the EU level.

“There is a discussion,” said Sukeľ. “But it is necessary to realise that re-export is, for countries into which medicines are imported from cheaper countries, a tool to save finances in the health care.”

The Slovak Health Ministry notes that the phenomenon is a problem.

“This is not only the problem of Slovakia, but all EU member countries; it is noticeable for instance in Britain,” Hlôška told Zdravotnícke Noviny. “This is because there is no unified legal norm regulating the re-export because this is a legal business based on free movement of goods.”

On the other hand, bans on re-exporting medical drugs from Slovakia have angered the European Association of Euro-Pharmaceutical Companies (EAEPC). It has filed an official complaint with the European Commission against Slovakia’s legal norm that requires exporters to report their intention to export medical drugs and, in the event that they are unavailable, they can be banned from doing so.
The EAEPC explains on its website that the basic principle of free movement of goods within the EU and EEA creates an opportunity for parallel trade in medicine.

“Once a product is legally placed on the market in a country within the EEA by the owner of its trademark rights, the owner cannot rely on these rights to hinder the further sale of the product within the EEA,” reads the EAEPC’s website. “Parallel trade is likely to exist wherever there are price differentials.”

The EAEPC further writes that parallel trade of medicine in the EEA is 100 percent legal. A core objective of the EU's Treaty of Rome is the creation of a single, internal market through which goods, services, people and capital can freely pass.