OBSERVERS and professionals alike agree that last year’s festival Divadelná Nitra marked a shift from individual and philosophical issues toward more social concerns as the festival launched projects aimed at exploring the darker aspects of Slovak and European history. This year’s edition, running September 27 to October 2, was even more direct. Titled “Purged? (Očistení?)”, it posed questions about how the former communist countries have come to terms with their past. 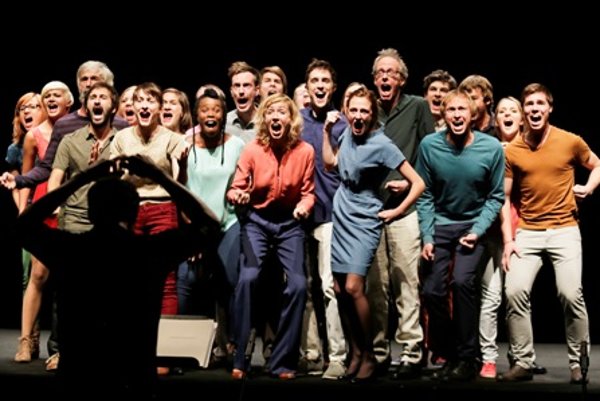 OBSERVERS and professionals alike agree that last year’s festival Divadelná Nitra marked a shift from individual and philosophical issues toward more social concerns as the festival launched projects aimed at exploring the darker aspects of Slovak and European history. This year’s edition, running September 27 to October 2, was even more direct. Titled “Purged? (Očistení?)”, it posed questions about how the former communist countries have come to terms with their past.

Part of the main programme, called “Parallel Lives”, explored the life stories of people persecuted by the communist-era secret police, and included performances from Slovakia, the Czech Republic, Romania, Hungary, Slovenia, Poland and Germany (from Dresden, which used to be part of the communist German Democratic Republic).

The project’s opening piece was the Romanian Typography Majuscule (Performing Archives), performed by the dramAcum ensemble from Bucharest and directed by Gianina Carbunariu. The story, found in archives of the infamous Romanian Securitate, shows a brief but decisive episode in the life of secondary-school student Mugur Calinescu, aged 16. One day, inscriptions were found on the wall of a local construction site (of the future local trade union headquarters) and elsewhere, calling for more freedom, justice, true solidarity (citing the famous Polish trade union of the same name) and for and end to oppression.

In an impressive performance using modern technologies to express not only the emotional states of the student, his friends and neighbours as well as family, but also the work procedures of the secret service, the actors unfolded a sad story of an ostracised teenager who took great risks to beat back hypocrisy and make the world around him more humane. Gradually, under the pressure of the Securitate and his own fears, all his close and loved ones turn away from him, except his mother. Calinescu was allowed to continue his studies, but not to graduate from a university. He died two years after this incident of leukaemia. In the final scene his mother accuses the secret agents of having caused her son’s illness by radiating him.

In Nitra, Typography Majuscule had its international premiere just days after its Romanian premiere. Several other plays in the project had their premier as well (Slovak SkRAT theatre’s “Inside of the Inside”; Polish New Theatre’s “Follow Me”; and Hungarian Sputnik Shipping Company’s “Reflex”

[Meltdown]). All of them tracked down interesting stories of protesters and dissidents persecuted by the totalitarian regimes and transformed them into dramatic works.

Another Divadelná Nitra tradition is the opening evening, dedicated in recent years to some kind of project that falls outside the bounds of classical theatre. The end result of the project, always an international one, was this time called, mysteriously, “Suite No 1 ‘ABC’ for 22 Performers and a Conductor”, and it indeed involved 22 performers: 11 professionals from Belgium and France and 11 amateurs from Slovakia. Rather than act, they simply repeated the sounds and languages they heard, creating short sketches. The Encyclopaedia of Speech (L’ Enyclopédie de la Parole) art project explores all the subtleties of a spoken word. The stable core of the project were Joris Lacoste (director), Nicolas Rollet, Frédéric Danos, Emmanuelle Lafon, Élise Simonet, Valerie Louys and David Christoffel.

“We created the piece in Belgium, but it is meant to be played everywhere in the world,” the project’s conductor and co-organiser, Nicolas Rollet, told The Slovak Spectator. “That’s why they are in all different languages. The initial idea was to make a piece that will travel a lot.”

Rollet told The Slovak Spectator that the September 27 performance in Nitra was the only one in Slovakia. The Slovak performers, comprised of amateurs and drama students, praised the work of the international team. They were selected, Rollet said, to fit with the 11 original performers, but were not meant to look like models or actors, but rather like average people.

The group took Chekhov’s play, cut it and arranged an easily-edible, funny, contemporary “theatrical jam session” that simultaneously tells eight life stories, eight frustrations, eight destroyed desires and hopes, and eight people fooling around with each other. It is so light and delightful that one even expects a happy ending; and when the play’s failed author, Kostya, leaves the stage to shoot himself, it is hard to believe that this is how it all ends.

The six-day festival included much more. Among the event were a host of debates, several exhibitions, interactive happenings, concerts, performances and events for children, and workshops. In particular, the international character of the festival makes it a special attraction for non-Slovak speakers who would like to explore Slovak drama more deeply.