ARTIST Tomáš Džadoň has unveiled one of the country’s most peculiar visual and architectural works in Košice, where three traditional wooden houses from Slovak villages have been placed on the top of a 13-storey communist-era pre-fabricated housing estate, often called a “panelák”. 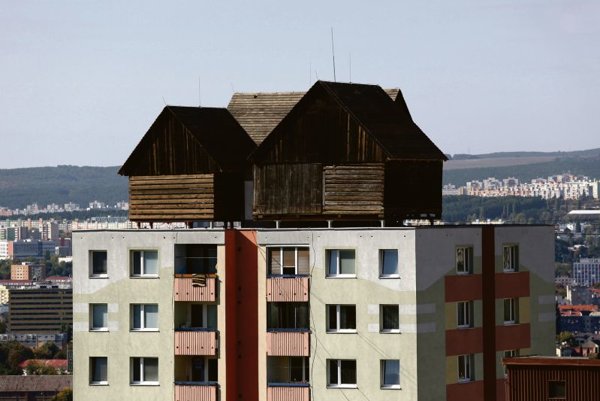 ARTIST Tomáš Džadoň has unveiled one of the country’s most peculiar visual and architectural works in Košice, where three traditional wooden houses from Slovak villages have been placed on the top of a 13-storey communist-era pre-fabricated housing estate, often called a “panelák”.

Apart from the European Capital of Culture Košice 2013, the city of Košice, the Culture Ministry and other national and private institutions and organisations helped the project, as did private donors. The installation in Lidické Square in the “Dargov Heroes” housing estate, popularly known as “Furča”, can be seen from far away.

Džadoň, the 32-year-old creator of this “intervention in public space” said of the original idea: “The first design of the FAM appeared way back in college in Prague, at the Academy of Fine Arts, in the studio of Jiří Příhoda. I prepared it for my hometown, Poprad; it was around the year 2006 and I felt a strong sense of uprootedness, so typical for my generation,” he told the Pravda daily in late 2012.

“I re-evaluated and questioned the notion of tradition, as I didn’t understand it as naturally as my parents did,” he continued. “I perceived a certain trauma in the society that was connected with socialism. As I experienced communism in Czechoslovakia only through my childhood, I felt the urge, the willingness and energy to overcome all the clichés and stereotypes settled in our heads and sold by culture.”

Explaining how the current project came into existence, he recalled that Lukáš Berberich from the Tabačka culture hub was the first to discuss some type of monument for Košice. Then the ECOC project stepped in and although the leadership of the project changed, Džadoň’s vision was preserved. It took nearly two years of negotiations, bureaucratic red tape and fund-raising to complete.

“I connected the wooden houses as the image of our romantic innocence with a panelák, a housing estate; our collective experience with my personal experience,” Džadoň said. “I was born in a panelák, and so for me, the space of a housing estate is much more natural than a village with wooden cottages. I symbolically placed the burden of our past on the shoulders of every day life of a panelák human.”