THERE are more than 1,000 ways to prepare codfish, said Ana Maria Coelho Ribeiro da Silva, who is in Slovakia representing the country with Europe’s highest fish consumption per capita, adding that Portugal’s codfish tradition goes back to the 15th century.

Related: Portuguese cuisine I Salad I Main dish I Dessert I Other cuisines 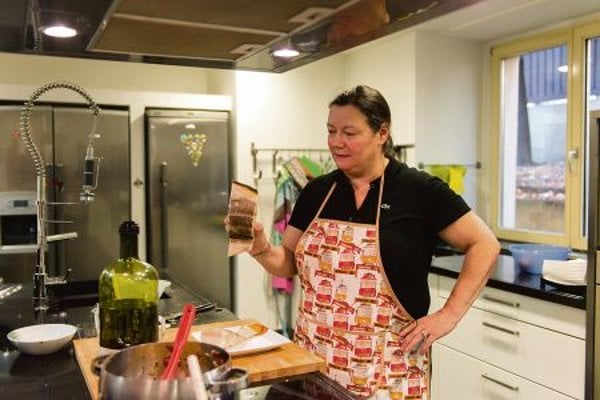 Of the more than 1,000 recipes, Ribeiro da Silva, the Portuguese chargé d'affaires, picked codfish with corn and wheat bread for the sunny mid-September day in Bratislava, explaining that this particular recipe goes well with the autumn season.

“Olive oil, lots of garlic and coriander,” Ribeiro da Silva said when listing some of the essentials of Portuguese cuisine, adding that these can be found in almost every dish cooked in her homeland.

However, Ribeiro da Silva also explained for the Cooking with Ambassadors programme, prepared by The Slovak Spectator and TV Sme, that, for example, fresh coriander is not always easy to find in Slovakia, “so when I find it, I buy it all”.

Slovaks who are ready to add some codfish recipes to their own menus might also have difficulty finding dried and salted cod in Slovakia, one of the most typical ingredients in Portuguese cuisine.
The Portuguese diplomat, who admitted that cooking is one of her passions, shed few tears while thinly slicing large onions, and when asked, she shared her secret: put the onion into warm water before slicing it.

As for international influences on Portuguese cuisine, Ribeiro da Silva explained that several nations, namely Brazil, have left their mark on her homeland’s dishes. However, she added that it is actually easier to find Portuguese influences on the cuisines of other nations.

“For example, Japanese tempura is actually a Portuguese invention created by monks back in the 13th century and then taken to Japan,” Ribeiro da Silva said.

According to Ribeiro da Silva, Portuguese cuisine is healthy because people avoid using a lot of fat and grease, and they even fry eggs in olive oil. Despite the healthy essence, the diplomat suggested, “the Portuguese are trying to eat even healthier than they ate before”.

Nevertheless, eating habits in Portugal, one of the four countries with the highest fish consumption in the world, differ from region to region, with people in the inland regions eating more meat, especially pork and lamb, while people near the coast consume more fish.

When asked about her experience with Slovak cuisine, Ribeiro da Silva suggested that it has so far been positive, and that she even plans to cook some Slovak dishes.

“One of these days I will try to do something simple,” Ribeiro da Silva said.

She noted that Slovaks eat more red meat, including dried and smoked sausages, than the Portuguese, who prefer chorizo, a fresh sausage.

When asked what the Portuguese prefer to drink with their meals, Ribeiro da Silva responded red wine, white wine and even green wine, explaining that Portugal is indeed a wine country.

“Then during summer time, and that’s an influence from Spain, we drink sangria, which is lighter,” Ribeiro da Silva said.

The Portuguese do have a sweet tooth, Ribeiro da Silva explained, listing pastel de nata as a starter, then the egg-yolk based dessert called papos de anjo, as well as “sweet rice, which people sometimes find very weird, but it is very good”.