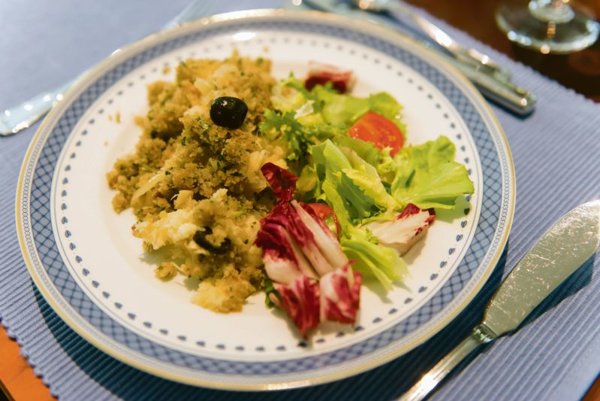 Preparation: Boil the cod in cold water with garlic (do not remove the garlic skin) and a tbsp of olive oil. When the water starts boiling, remove from heat, cover and set it aside for half an hour. Remove the bones and skin of the codfish and, with your hands, break or “slice” it into small thin pieces (like leaves). Cook the mashed potatoes with an egg yolk, milk, pepper and nutmeg. Thinly slice 4 large onions, throw them into a deep frying pan with olive oil and sauté until they soften. Add the cod, the olives and pepper. Stir for about 5-8 minutes. Remove the breadcrumbs, grind with 2 or 3 peeled garlic cloves. Mix the bread with the chopped coriander, add olive oil until you have a paste. Put the mashed potatoes on the bottom of a deep tray, add the codfish and cover with the bread paste. Put in the oven (pre-heated 200°C) for half an hour.