They come from far and wide

For some contemporary visitors, Bratislava is merely Party-Slava, home of nightclubs and bars. But that view of the city is only a modern one: for hundreds of years the dominant presence here has been religion, and Bratislava remains a wonderful place in which to sit in the cool shadows of ancient walls and statues of saints, or to contemplate in silence while basking in the sunlight reflected through the majestic coloured windows of its spectacular places of worship. 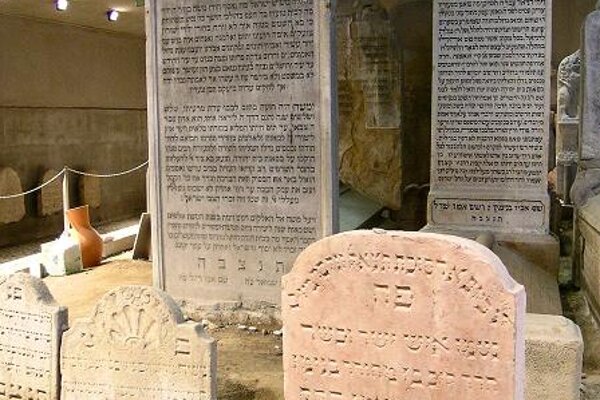 The final resting place of Chatam Sófer (on the photo), the Chief Rabbi of Pressburg, whose tomb was saved despite the scarring of the landscape (Source: Viera Kamenická)
Font size:A-|A+  Comments disabled

For some contemporary visitors, Bratislava is merely Party-Slava, home of nightclubs and bars. But that view of the city is only a modern one: for hundreds of years the dominant presence here has been religion, and Bratislava remains a wonderful place in which to sit in the cool shadows of ancient walls and statues of saints, or to contemplate in silence while basking in the sunlight reflected through the majestic coloured windows of its spectacular places of worship.

Since as long as records go back, Bratislava has been the destination for pilgrims who have come to engage with the city’s rich spiritual history. There are five sites in Bratislava that are of particular relevance and to which pilgrims continue to come to pay homage.

One of the first places most tourists will visit in Bratislava is St Martin’s Cathedral, one of the greatest monuments of the city and significant as the coronation church of the Hungarian Kingdom. It is also a specific pilgrimage destination. In the Chapel of St John the Merciful (Kaplnka sv. Jána Almužníka) on the left side of the church, are the mortal remains of John the Merciful.

John, also known as John the Almoner, was the patriarch of Alexandria, born in Cyprus in the seventh century. His body took a circuitous route to Slovakia, via Istanbul (which was then Constantinople) and Venice, before arriving in Slovakia, probably in the mid 16th century. His remains are now stored in a glazed silver shrine above the altar in the chapel that bears his name.

Bratislava has also always been an important centre of Jewish culture, despite suffering long periods of persecution common across Europe, as well as a series of construction projects that have devastated former Jewish neighbourhoods. Nevertheless, one crucial site in the city has remained intact and is now visited by Jews from across the world.

The old Jewish cemetery, at the bottom of the castle hill, dates from the 17th century and at one time contained around 6,000 graves. Much of it was destroyed in 1942-43 when a tram tunnel was built under the castle, exiting through the cemetery. Latterly, the rest of the former Jewish quarter was razed during construction of the SNP Bridge in 1969.

However, one of the tombs that was saved and is now preserved in a tiny underground room is the final resting place of Chatam Sófer, the orthodox scholar born Moshe Schreiber in 1762 and who died in 1839. Sófer became Chief Rabbi of Pressburg in 1806 and also headed the yeshiva (rabbinical school) in the city. He was a strictly Orthodox rabbi. Somehow his tomb was saved despite the massive societal upheavals and the scarring of the landscape. Most visitors now come in September, on the anniversary of his death, to pay their respects.

“This town was always tolerant,” said Viera Kamenická, from the Museum of Jewish Culture in Bratislava, part of the Slovak National Museum.

Another of the most visited and most important pilgrimage sites in Slovakia is the Marian Valley and the village of Marianka, the oldest Catholic pilgrimage destination in Slovakia and one of the oldest in the whole of central Europe. As the name suggests, the whole area is devoted to the Virgin Mary and includes numerous holy sites, drawing pilgrims from across the region for several centuries.

The most significant sites are the Pilgrimage Church of the Nativity of Virgin Mary (Kostol Narodenia Panny Márie), a shrine to the Virgin Mary that has come to be known as the Lourdes cave, the Chapel of the Holy Well, and the Way of the Cross, which has 14 stopping points.

Many legends have grown up concerning the healing powers of a visit to the area, and to be gained from praying to a statue of the Virgin Mary believed to date from 1030. Two years ago, the Marian Valley also gained the privileges of a basilica minor, which means visitors can obtain indulgence here.

The Marian Valley is visited by 200–300 pilgrims on the first Saturday of every month, increasing to 500–1,000 during good weather. Regardless of the conditions, the Feast of the Holy Trinity, in spring (May or June), and the Feast of Nativity of Our Lady, in September, usually attract 5,000–6,000 pilgrims annually.

There was once also a Calvary in the hills of Bratislava, close to the Church of Our Lady of the Snows. But 13 of its 14 stops were destroyed during the previous regime, as well as the tower of the church, leaving only the peaceful Lourdes cave. It contains a statue of the Virgin Mary, surrounded by hundreds of marble plaques offering thanks.

Although plans for redevelopment of the whole Calvary are often discussed, priorities tend to be with the reconstruction of existing monuments rather than building from new, and there are no fixed dates for the construction.

One last special, but almost forgotten, pilgrimage destination is in the town of Malacky, about 40 kilometres from Bratislava. Contained in a chapel to the right of the main Franciscan church is a copy of the Holy Stairs (Scala sancta) from Rome, which Christ climbed to meet Pontius Pilate during his trial.

The staircase is considered to be one of the most faithful copies existing anywhere in the world, but is visited by only a few hundred pilgrims per year. The stairs are currently under reconstruction but are due to reopen by the end of 2013, according to the Malacky parish office.

2013 is important to the Christians of Slovakia, marking 1,150 years since the arrival of St Cyril and St Methodius to Great Moravia, the missionaries largely credited with spreading Christian faith in the region. And it is maybe an appropriate time for Slovaks to repair some of the damage done in the country, mostly by the previous regime.

“Sad is the nation, which tramples on its own history,” said Kamenická adding that the nation is then forced to resort to fabrication.