IMPROVED tax collection, state administration reform and measures to support economic growth will lead the government to unfreeze salaries of approximately 340,000 public servants, keep the public finance deficit under 3 percent as required by the European Union and possibly slash corporate income taxes from 23 to 22 percent, according to government plans for 2014 and beyond. 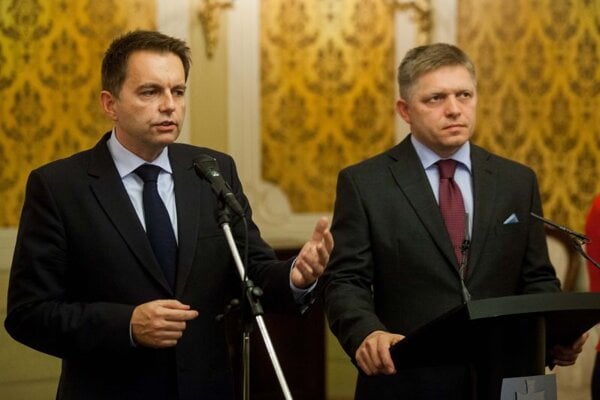 IMPROVED tax collection, state administration reform and measures to support economic growth will lead the government to unfreeze salaries of approximately 340,000 public servants, keep the public finance deficit under 3 percent as required by the European Union and possibly slash corporate income taxes from 23 to 22 percent, according to government plans for 2014 and beyond.

“Today I can say with great gratification that we not only will meet our obligation of keeping the deficit under 3 percent of the GDP, but that after several difficult and crisis years we are changing the situation [from] when the growth of wages in public administration was frozen,” Prime Minister Robert Fico said after his cabinet approved the draft state budget for 2014 on October 10, as quoted by the SITA newswire.

The government aspires to trim the public finance deficit in the upcoming years, and for 2014 plans a deficit at 2.83, down from this year’s 2.98 percent. In 2015, the deficit is planned at 2.57 percent, while in 2016 it should be a mere 1.50 percent of the GDP, if the draft state budget which the cabinet must advance to the parliament by October 15 becomes a reality.

Given the dominance of Fico’s Smer party in parliament, it seems likely.

The draft state budget assumes the deficit at €3.39 billion, with revenues standing at €13.84 billion and spending planned at €17.22 billion, the TASR newswire reported.

The draft also looks to cut the corporate income tax rate from 23 percent to 22 percent as well as the introduction of tax licenses for trade companies. The cabinet expects these measures to have a positive impact on the budget estimates at €84.2 million, while a special levy applied in regulated industries is expected to bring in an additional €78.7 million.

The government of Robert Fico scrapped the 19-percent flat tax last year. The planned tax license should work as a minimal fee, which, based on the new rules, limited liability or joint stock companies, which have so far reported zero tax duty in their tax returns, will also have to pay.

The Finance Ministry assumes that making the public administration more effective will bring €333 million to the state coffers, while the government expects €91 million from companies where the state holds managerial control either through dividends or more effective operation, TASR reported. Merging offices within the public administration reform should save €105 million with an additional €54 million coming from the sale of redundant state property.

The growth in public debt should, according to the government, gradually slow once the budgetary goals are being fulfilled, with its peak expected in 2014 at 56.8 percent of the GDP. In the coming years it should sink and in 2016 reach the level of 55.7 percent, according to the draft budget plan.

Wages of constitutional representatives will remain frozen, which Fico sees as an expression of solidarity. The thaw will bring an additional €16 per month on average to the wages of 340,000 employees in public administration, which represents a 2-percent pay hike, based on an agreement between the state and trade unions, SITA reported.

Yet, about 100,000 teachers at regional schools and educators at universities will see their wages increase by 5 percent, which would add an approximate €42 per month to their pay, based on negotiations between teachers’ unions and Finance Minister Peter Kažimír. Pouring more money into the purses of teachers and non-teaching employees of the education sector will require an extra €80 million from the state budget, according to SITA.

When responding to the plans of the government to trim the income tax for corporate entities, representatives of the opposition Christian Democratic Movement (KDH) and the Slovak Democratic and Christian Union (SDKÚ) said that the Fico government is only proving its economic incompetence.

“We have been saying in parliament for a year and a half that it is a fundamental mistake to hike corporate taxes,” said SDKÚ deputy chairman Ivan Štefanec, adding that today the government is admitting this mistake, but “wants to improve it only cosmetically”.

KDH chairman Ján Figeľ also sees in the decision the government’s confirmation that it has made a mistake when after taking power it hiked corporate taxes by 4 percentage points.