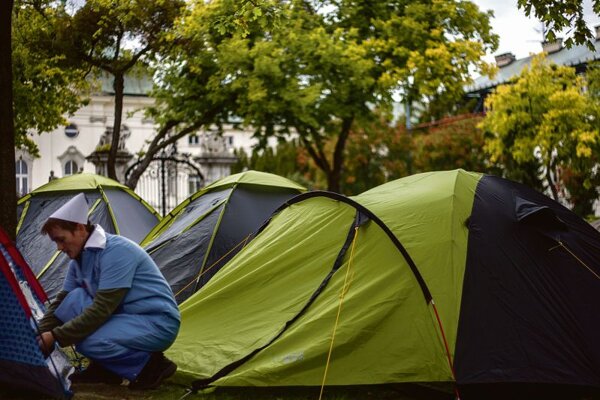 Nurses who work for private health centres should pitch their protest tents in front of Penta, the financial group which owns hospitals in Slovakia, Fico said during his meeting with the nurses, as private physicians expressed concern that wage hikes at state facilities could prompt nurses to leave private centres.

While the nurses say that neither their meeting with Fico nor with Health Minister Zuzana Zvolenská brought progress, Iveta Lazorová, president of the Slovak Chamber of Nurses and Midwives, said that the tent protest at least got the attention of the public.

“The success is in the fact that the public is on our side,” Lazorová told The Slovak Spectator. “Each and every one of us is a potential patient and without nurses things simply cannot work.”

The nurses’ grievances come in reaction to a Constitutional Court ruling against a law authorising an increase in the minimum salaries for nurses and midwives. The scrapped law, among others, had guaranteed minimal wages ranging from €640 to €928 per month depending on the professional area of emphasis.

“We did not protest only for our salaries but also other problems, which accompany the performance of work of nurses and midwives in Slovakia,” Lazorová said, while expressing disappointment over the response of politicians, who came to the nurse camping site, according to her, only under media pressure. The health minister first sent the nurses a message that she would not come, “then she made a courtesy visit and sent us soup”, Lazorová said.

Fico promised his government would address the nurses’ wage-related woes in the state-controlled health institutions including teaching hospitals and hospitals managed by the self-governing regions (VÚC) and towns. Trade Unions of Nurses and Midwives (OZSaPA) Chairwoman Monika Kavecká however said that Fico’s offer does not solve the situation since the union wants all nurses, regardless of the type of hospital they work for, to have their salaries guaranteed by law. Moreover, the nurses said that no specific steps have been discussed and everything remained at the level of promises, according to the SITA newswire.

Zvolenská, however, says she saw a “clear offer” involving cooperation at the level of VÚCs and towns being put on the table to improve the status of nurses in the system, calling it very good, clear and fully guaranteed.

“Nurses employed in private health-care utilities have to enforce their demand directly with their employers, who normally run businesses in the health-care sector while making a profit,” Zvolenská said, as quoted by SITA. “This is why we want to guarantee wages only in the public sector and thus put indirect pressure on private providers so that they share their profits with their employees.”

“Unfair,” is how Lazorová responded to the offer, suggesting that Fico told them that the nurses who work for private hospitals should go and “erect their tents in front of Penta”, the financial group, which owns private hospitals in Slovakia.

“By what right does he divide nurses to state and private, black and white, good or bad,” Lazorová said. “Health care is covered from private funds. Does the nurse treat the patient differently in a private from a state-run hospital?”

Since the nurses have not been given any concrete terms, they are reluctant to believe the good intention of the offer, she added.

What do private doctors say?

Even just in outpatient care facilities, a raise in salaries for nurses and physicians would require €70 million, according to Association of Private Physicians (ASL) President Ladislav Pásztor, who suggests that the only way to channel these funds to the private outpatient health-care providers is changing payment policies of the health insurers.

“We had known early on that it would bring problems,” Pásztor said of the now nullified law that guaranteed nurses’ salaries, as quoted by SITA on October 9.

The non-state outpatient care physicians have been increasing salaries of nurses since August 2012, drawing funds from the state budget’s €50 million reserve, according to Pásztor.

The Health Ministry has repeatedly declared that in the state-run health-care utilities, the nurses are paid in a way as though the law is still valid. Yet, Pásztor also suggested that the difference in wages of nurses at state-run hospitals and outpatient care institutions might lure the nurses to the hospitals. The state would need €33 million to balance these salaries.

The average personnel costs at non-state doctors’ offices, considering one physician and one nurse, stands at €2,800 per month, which already includes the increased wage demands of the nurses.

There are wage differences even between Bratislava and some regions of Slovakia, with Pásztor saying that in some regions physicians are paid salaries which in Bratislava would not satisfy a secretary.

The nurses have submitted a six-point declaration to the cabinet. They call for pouring additional finances into the health-care system so that the state’s contribution is adequate to the expenses of those patients whose insurance is covered by the state, and they want the minimum wage for nurses to be secured by law. The union and the chamber call for keeping a minimum number of patients per nurse due to higher risk of diseases, drugs without high surcharges and cutting the work hours of all health-care workers in a multi-shift operation to 35 hours per week, according to the TASR newswire.

Meanwhile, Finance Minister Peter Kažimír of Smer told the public service Radio and Television of Slovakia (RTVS) that “what is happening here over the past two or three years, gradually develops into a phenomenon, which I start calling profession racism. It is about who has bigger weight, who can shout louder, who is more important and deserves higher remuneration.”

Kažimír said that the state cannot take a different approach to one group of employees from others. The Medical Trade Unions (LOZ) and Health Policy Institute supported the protest, with Peter Visolajský, head of the LOZ, saying that medical employees are entitled to a legitimate guarantee of salaries, SITA reported.

The disputed legislation, passed by parliament in February 2012 following negotiations between the SKSaPA and the government, was meant to prevent the salaries of nurses and midwives from falling under a certain level. The minimum starting salary for a nurse or midwife without practical experience was to be at least €640 a month, which would increase over the next three years to reach €666 per month. A nurse’s minimum salary was then supposed to increase every three months until it reaches €928 after 33 years of work experience.

The rules applied to all nurses and midwives, not only those working for state-run health-care facilities. Yet, despite the law coming into force on April 1, 2012, some hospitals and private doctors avoided having to comply with the law by cutting the working hours of nurses or reclassifying them into lower-paid positions.

The Slovak Medical Chamber (LOZ) disputed the constitutionality of the law in March 2012, with the General Prosecutor’s Office filing a complaint with the Constitutional Court in July 2012. The prosecutor’s office argued that the law was unconstitutional because it covered only certain health-care workers, nurses and midwives, and that there was a lack of authorised funds available to pay the higher minimum salaries. Moreover, the prosecutor’s office also mentioned an analysis by the Health Ministry, according to which some nurses might have received higher salaries than doctors working in the same clinic, TASR reported.