SLOVAKIA’S energy companies have recently seen several ownership changes, such as the Czech Energetický a Průmyslový Holding (EPH) entering the natural gas utility SPP earlier this year, only to leave its share in the parent company to the state while acquiring a stake in a regional power distributor. Analysts and experts say such changes are natural and reflect the current development of Europe’s energy market. 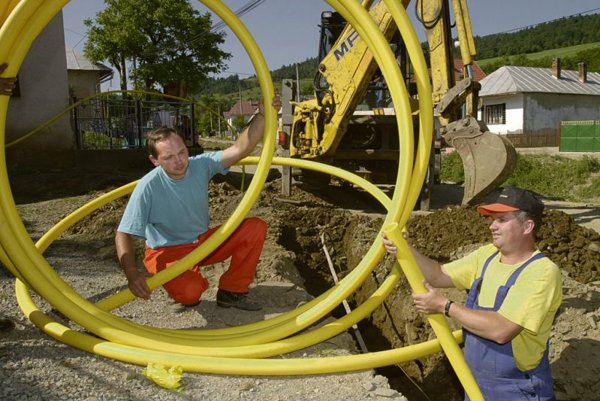 The economic crisis has led to some changes. (Source: TASR)
Font size:A-|A+0

SLOVAKIA’S energy companies have recently seen several ownership changes, such as the Czech Energetický a Průmyslový Holding (EPH) entering the natural gas utility SPP earlier this year, only to leave its share in the parent company to the state while acquiring a stake in a regional power distributor. Analysts and experts say such changes are natural and reflect the current development of Europe’s energy market.

“In general, energy suppliers change owners everywhere,” Zuzana Lukáčová, head of analysis at the Energy Analytics, told The Slovak Spectator. “As long as it does not happen on a big scale, and it does not in Slovakia and in neighbouring countries, it is natural.”

Luboš Vančo, managing partner of KPMG in Slovakia, sees several reasons behind the recent changes in Slovakia, but considers changes on Europe’s energy map as the most important, such as the launch of the Nord Stream natural gas pipeline via the Baltic Sea, which will transport Russian gas to Germany; strategic changes in individual European countries’ energy sectors, like Germany’s switchover from nuclear power to renewable energy; significantly higher prices of energy than, for example, in the US; and increased energy regulation in central Europe.

According to Pierre Pončík, manager at the consulting department at Deloitte Slovensko, the main reasons for the changes should pertain to the global strategy of foreign investors. Both E.ON and GDF SUEZ declared their priorities to focus on emerging countries by leveraging their presence in Europe; to decrease the role of regulated assets in their portfolio, which means less infrastructure and more generation of assets and renewables; and to prefer full control governance. On the local level, two other factors could be mentioned: increasing pressure from regulators, as seen in many EU countries, and a 10-year investment payback period.

Lukáčová sees three main factors behind these changes: the energy market, the regulatory environment and the economic crisis.

“The Slovak energy market has gradually stabilised and key players have defined their positions completed by a number of relatively smaller suppliers,” Lukáčová told The Slovak Spectator. “Competition has thus defined not only market shares but has also affected margins for non-regulated segments. Decreasing margins can be a motivator to leave and search for a new business opportunity where the trend is the opposite.”

On the other hand, according to Lukáčová, current margins are not negligible, and they attract new investors that know the local, Czech and Slovak markets well and have good local connections and backgrounds to support their business.

Regulation is a long-term problem, already addressed by the European Commission due to the lack of transparency, and its independence is also questionable, according to Lukáčová.

“Despite the original strategy, which outlined a gradual loosening of regulation and finally no regulation at all, even for households, regulation has strengthened and now includes also small businesses,” said Lukáčová. “The result is both smaller margins and prescribed tariffs, leaving very little space for competition and leading to more or less almost identical offers. Again, a good reason to question if you want to stay in such a market. ‘Domestic’ investors think they will be able to operate even in these conditions.”

Behind all this there is the economic crisis, resulting in lower volumes of energy sold and therefore also lower absolute margins, and companies can decide to save by leaving small markets and concentrate either on a few bigger markets and/or search for new ones with higher profits or even new industries, according to Lukáčová.

The changes in Europe are bringing changes in ownership relations, the structure of energy sources and price fluctuations, and all of them are visible in Slovakia, according to Vančo. Because of current low electricity prices some power stations are being mothballed and do not produce electricity. Planned projects are being re-evaluated and new projects are being postponed because they are not profitable in the current environment.

Pončík does not see Slovakia as an exception, either.

“The same is happening in neighbouring countries, except for Poland: for example, the Czech Net4gas was sold by RWE, and [in] Hungary the state is buying back assets from big utilities like E.ON,” said Pončík.

Martin Vlachynský, analyst with the economic think tank INESS, agrees, adding that exchanges in positions of dominant players are common in the market economy as each company adjusts its targets and strategies over time.

“The energy market is among the most regulated within the economy, which means that the consumer cannot expect huge changes from the arrival of new investors; investors can move only in a narrow corridor,” Vlachynský told The Slovak Spectator. “This brings some positives and relatively many negatives. One of them is a high rate of uncertainty resulting from a possibility of an unexpected change in regulation, for example by the introduction of new rules or fees. This distracts them from making investments or motivates only to such investments, where the risk is compensated by higher revenues.”

With regard to changes that have taken place in Slovakia, Lukáčová said that natural changes which do not affect the core business result in the changing of company logos and probably new communication and marketing strategies.

“In terms of what new they can offer there is a little space,” she said. “In SPP, the state will be the supplier and openly declares its interest in lower or at least stable prices. I do not think we can expect big changes in the actual tariff structure. EPH in SPP will be basically invisible for the public and can concentrate on optimisation of processes and cost saving.”

In SPP-distribúcia, a subsidiary of SPP that deals with customers and suppliers, its offer is regulated, and basically nothing will change.

“More interesting is EPH in SSE,” said Lukáčová. “Our market is still in the phase of price competition, even though additional services or discounts on products are common, which speaks to the continuing sale of electricity and gas with various forms of discounts. However, EPH might try to bring something from more developed markets, combine other commodities [or] offer new services. We have to wait and see how it will work since EPH has a significant market share and serves a big number of customers.”

According to Pončík, assessing the situation is challenging, as the changes are too recent or have not yet taken place, and because the new investor has not yet communicated much about the strategy for next year.

“Finally, the situation is even more difficult to comprehend due to the coming changes concerning the SPP parent company and the state getting full control over it,” said Pončík.

Ownership changes in the energy sector

Earlier this year, Energetický a Průmyslový Holding (EPH), controlled by Czech entrepreneurs Daniel Křetínský and Petr Kellner and Slovak financial group J&T, bought a 49 percent stake in SPP, with managerial control, for €2.6 billion from its foreign shareholders E.ON Ruhrgas and GDF Suez. The remaining 51 percent is managed by the National Property Fund (FNM). Along with this it obtained a 49-percent share in SPP’s subsidiaries SPP-distribúcia, managing the gas distribution network in the country, and Eustream, the natural gas transporter and operator of the transmission system in Slovakia. Now the state is obtaining 100 percent in SPP while EPH kept its shares in SPP-distribúcia and Eustream.

Thomas Jan Hejcman, head of VSE, told the Hospodárske Noviny daily on October 3 that RWE, the German investor in VSE, does not plan to leave VSE.

“Currently we are successful in Slovakia; we have launched another company, RWE Slovensko, which should shelter, create and coordinate other activities of the concern in Slovakia. We would not have launched it if we were planning to withdraw.”