SLOVAKIA is a small country but its natural gas transition and storage infrastructure makes it a significant player on the European gas market. However, this may change after plans for new transmission pipelines materialise, which could make it difficult for Slovakia to fight for its share on the market. But this is not the only challenge the Slovak gas sector faces, as demand for gas has been decreasing throughout Europe. 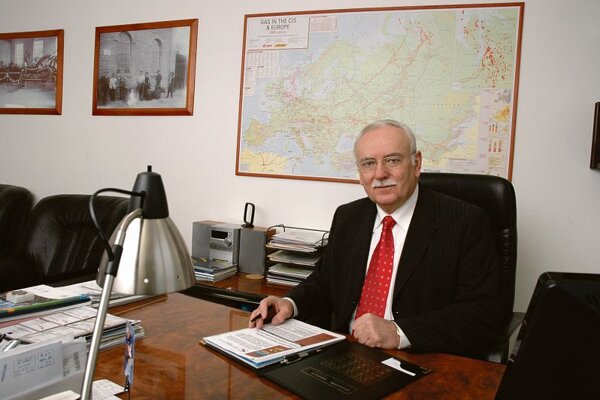 SLOVAKIA is a small country but its natural gas transition and storage infrastructure makes it a significant player on the European gas market. However, this may change after plans for new transmission pipelines materialise, which could make it difficult for Slovakia to fight for its share on the market. But this is not the only challenge the Slovak gas sector faces, as demand for gas has been decreasing throughout Europe.

The Slovak Spectator spoke about Slovakia’s natural gas infrastructure and the challenges it faces with Ján Klepáč, executive director of the Slovak Gas and Oil Association and advocate of natural gas as a premium fuel with minimum emissions and whose global deposits may last for the next 260 years.

The Slovak Spectator (TSS): What is Slovakia’s position on the natural gas map?
Ján Klepáč (JK): Slovakia is an exceptional country. This is because the biggest transmission system of natural gas in the EU leads through it. The system of Slovak transmission gas pipelines has an annual capacity of 94 billion m3 and Slovakia is still the biggest exporter of Russian gas to western Europe. Slovakia also has a high underground storage capacity of almost 3 billion m3. If we compare Slovakia’s annual natural gas consumption of approximately 5.4 billion m3, then Slovakia can store underground more than 50 percent of its annual consumption. Within Europe only Austria can store a bigger share. Moreover, within Europe gas penetration is higher only in the Netherlands. In Slovakia, there are 33,000 kilometres of distribution pipelines leading to 78-79 percent of towns and villages, in which 94 percent of the population lives. One can say that except for Lomnický peak in the High Tatras and sheep farms in the mountains, gas is available everywhere. All these factors make Slovakia a solid country in terms of natural gas on the European scale.

TSS: What challenges does Slovakia’s gas sector face?
JK: There are challenges which the whole European gas sector, including Slovakia, faces. Two years ago the International Energy Agency issued a report in which it predicted a golden age of gas. Yes, it is true in the whole world except Europe. Gas consumption has been increasing dramatically globally, but particularly in both Americas and south-eastern Asia, especially thanks to such huge economies as China and India. Global gas consumption increases 1.7 percent annually. Alas, this is not the situation in Europe. Here demand for gas decreased dramatically over the last two to three years.

TSS: What are the reasons behind this decrease?
JK: I see five main reasons. The first is extraction of shale gas in the US. The US is the first country to have managed to extract natural gas from shale structures. Actually, because they have such huge deposits of shale gas, the year 2013 will already be the second year when the US produces more gas than the Russian Federation. However, this cheap gas has pushed coal from the US energy portfolio, which as a consequence is being exported to Europe. This coal is very cheap, much cheaper than gas traded in Europe. This means that gas is becoming uncompetitive compared with coal. The result is that several highly effective gas-fired combined-cycle power stations have been closed across Europe. We do not need to go far for an example: E.ON has mothballed one of its most modern combined-cycle power stations in Malženice in western Slovakia because the station cannot operate profitably in the current environment. A consequence of this is also that the USA is cleaning its environment by reducing CO2 emissions, while Europe has been erasing the results achieved so far by the EU’s 20-20-20 programme [with targets until 2020 to reduce EU greenhouse gas emissions by 20 percent from 1990 levels, to raise the share of EU energy consumption produced from renewable resources to 20 percent and to improve the EU’s energy efficiency by 20 percent] and polluting its environment with CO2 emissions released by burning cheap American coal.

The second factor is closely connected to the first one and these are cheap allowances for CO2 emissions. Three or four years ago allowances cost €28-30 for one tonne of emissions. At the beginning of 2013 the price decreased to €3 and today, thanks to the ‘backload’ of allowances in the EU’s emissions trading scheme (ETS), the price is about €4.5. But still, it is worth it for energy producers to buy cheap American coal and pay for excess CO2 with cheap allowances. I believe that the setting of ETS is unlucky and that it is necessary to either cancel or reconstruct the scheme.
The third factor, and one of the most serious problems of the energy sector, is heavily supported renewable energy sources, at the EU as well as national levels. For the time being we see some remedial steps being taken because huge money has been pouring into renewable energy sources, and this money comes from our pockets. As long as these sources are artificially subsidised, natural gas is only minimally competitive.

The fourth factor, and the only positive one, involves measures taken to improve energy efficiency, i.e. to produce more effectively with less energy consumption. This is a step in the right direction.

The fifth factor is the ongoing crisis in the EU, when savings and lower demand have reduced production and thus also gas consumption.

The outlook for the next development in gas consumption does not indicate any dramatic changes, while it seems that gas consumption has stabilised and stopped declining.

TSS: How does the construction of new gas transmission routes that bypass Slovakia affect existing pipelines in Slovakia?
JK: Slovakia has already started to feel the impacts of the construction of new infrastructure. Two years ago a first line of the Nord Stream, from Vyborg in Russia to Greifswald in Germany via the Baltic Sea, was opened. Its second line opened one year ago. As a consequence the annual volumes of gas transmitted via Slovakia decreased by about 20 billion m3. And this is not the end, as construction of the South Stream bypassing Slovakia via the south has started. It should lead through the Black Sea and end in Burgas in Bulgaria, while it is still not clear whether it will lead up to Baumgarten on the Slovak-Austrian border or whether it will be stretched to Italy or Slovenia. In any case, the pipeline is being built and after it is completed the importance of Slovakia’s gas transit will decrease dramatically.

TSS: What can Slovakia do to remain a significant player in gas transmission?
JK: Eustream, the natural gas transporter and operator of the transmission system in Slovakia, signed in 2008 a 20-year ship-or-pay contract with Gazprom Export on the transmission of an average of 50 billion m3 annually, i.e. more than one half of the capacity of transmission pipelines in Slovakia. This means that Eustream is in quite good shape. However, things are constantly moving. The EU is preparing to charge the Russian gas export monopoly with abusing its dominant position in central and eastern Europe. A table published by the Russian Izvestija daily this February shows that Gazprom invoices the highest gas prices to those countries which are fully or highly dependent on Russian gas, while prices for those countries with diversified gas resources are lower. The response of Gazprom may be that it would like to open transit contracts. Thus I consider it very important that Slovakia actively enters these games, to have something which I call energy diplomacy, because if it does not do this, it will simply drop out of these games.

TSS: Nord Stream and South Stream pipelines mean only diversification of routes?
JK: That’s right. Nord Stream bypasses Slovakia from the north and the South Stream from the south, transporting the same gas, from Russian Yamal peninsula to Europe. In general, the dependence of central Europe on Russian gas is very high.

But the gas crisis back in January 2009, when Slovakia was cut off from Russian gas for 12 days, spurred bigger cooperation between countries of the Visegrad Four (V4), which means Slovakia, Hungary, the Czech Republic and Poland. A result of this cooperation is construction of the North-South interconnector, also supported by the EU because it increases security of supply, as it allows for getting gas from sources other than Russia into central Europe. It should connect the liquid natural gas (LNG) terminal at Świnoujście in Poland with a planned LNG terminal on the Croatian island of Krk. The plan is that it crosses all V4 countries and Croatia. The Croatian-Hungarian interconnection has already been in operation for two years, while the Slovak-Hungarian interconnection should be put into operation at the start of 2015. The feasibility study into the Slovak-Polish interconnection project is currently being evaluated. The Świnoujście terminal should have the annual capacity of 5 billion m3 in the first phase, with a possibility to increase it to 10 billion m3. The V4 market represents an annual gas consumption of 41 billion m3. Thus the interconnector can reduce dependence of the region from Russian gas, but not to eliminate it completely.

TSS: How much is Slovakia dependent on Russian gas?
JK: Almost 100 percent. Annual gas consumption of Slovakia is about 5.4 billion m3, while this year it might be a bit lower, at 5.2 billion m3, but we will see, winter is just coming. Slovakia produces only 1.5 percent of its annual consumption of gas. The Nafta company extracts gas in eastern Slovakia, near the villages of Ptrukša, Stretava and Bánovce. It also returns to some former deposits in the Záhorie region, from which it can extract the remaining gas with new technologies. But actually, natural gas deposits in Slovakia are almost completely exploited.

With regards to dependence on Russian gas, Polish shale gas deposits were a light at the end of the tunnel. In 2011 shale gas deposits in Poland were estimated at 5,300 billion m3. However, in May 2012 the Polish Geological Institute reduced this estimate to 346-768 billion m3. Thus, Polish shale gas is not a solution for Slovakia. Moreover, a boom in shale gas extraction like there was in the US is not expected in Europe. This is because deposits in the US are mostly in uninhabited localities, contrary to Europe, as well as because of legislation. In the US when you own land, you own it down to the centre of the Earth, but in Europe you own only the surface and what is below are mineral resources which belong to the state.