A city of a hundred nations

Bratislava has always been a multicultural city, the result of its location on the crossing of trade routes and close to several national borders. Its traditional composition of inhabitants has typically depended on the current ruling nation and the political situation in central Europe, which has been in flux for many hundreds of years. 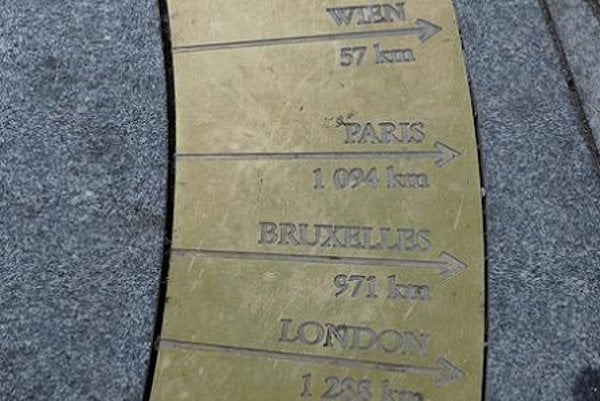 Bratislava has always been a multicultural city, the result of its location on the crossing of trade routes and close to several national borders. Its traditional composition of inhabitants has typically depended on the current ruling nation and the political situation in central Europe, which has been in flux for many hundreds of years.

Indeed, Bratislava has even changed its name numerous times, with previous generations of locals referring to it as Pressburg, Pozsony or Prešpork and even a period spent as “Wilson’s Town” after the American president Woodrow Wilson. Representatives of every nation have left even more permanent traces on the Slovak capital, and it is often possible to trace these various occupations at numerous sites in the city.

Along with the former federation with the Czech Republic (Czechoslovakia) Bratislava is most commonly associated with Austria and Hungary which border Slovakia to the west (Austria) and to the south (Hungary). Bratislava spent nearly 300 years as the coronation city and capital of the Hungarian Kingdom, and in addition to the shared history, there are numerous examples of Austrian and Hungarian styled architecture from the period.

Many of these date specifically from era of Queen Maria Theresa, who reigned between 1740-80 and oversaw a prodigious period of construction. Several governmental buildings, new palaces and waterworks were all built during these 40 years as the whole town became the centre of social and political life for the empire.

The Austro-Hungarian Empire was composed of several nations, including the countries of central Europe and some of today’s Balkan states. It meant that Germans, Czechs and Croatians have also made their home in Bratislava, as well as a Jewish population whose numbers predictably – and dreadfully – declined during the mid 20th century.

Spain also has links to Bratislava. In 1631 Mariana of Spain, the youngest daughter of Spanish King Felipe III and Margarita of Austria, married Ferdinand III, the heir of the Hungarian crown. She was crowned, together with her husband, in St Martin’s Cathedral in 1638.

There are several sculptures and plaques in the city to commemorate the visit of numerous famous historical figures or to mark significant events. The Danish fairytale writer Hans Christian Andersen has his statue on Hviezdoslavovo Square; the Czechoslovak president Tomáš Garrigue Masaryk stands in front of the Slovak National Museum; and there is a sculpture of the Hungarian poet Sándor Petőfi in Medická Garden.

A statue depicting a Napoleonic soldier leans on a bench in the Main Square and the French presence in Bratislava is also commemorated on a plaque in the Primate’s Palace, recalling the signing of the Treaty of Pressburg in 1805. Diplomats from France and Austria signed it after the battle of Austerlitz, which was won by Napoleon.

Pope John Paul II visited Bratislava several times after the Velvet Revolution and there is a statue of him in Námestie Jána Pavla in Petržalka, commemorating a 1995 trip, and a bronze relief in the Ursuline Church and Convent in the city centre.

In 1938, Bratislava also welcomed Indian dignitaries. One of the plaques near LeMonde restaurant at Hviezdoslavovo Square recalls the visit of Pandit Jawaharlal Nehru, with his daughter Indira Gandhi, the leaders of the Indian freedom movement against British rule.

The Italian presence in the city is best represented through the artworks in Pálffy’s Palace and Bratislava Castle. There are many Italian paintings from the 16th century, which “always attract the curiosity of visitors since they witness cultural ties dating back for hundreds of years between our two countries,” said Roberto Rizzo, deputy head of mission of the Italian Embassy in Bratislava. Moreover, the Church of St John of Matha has frescoes of the Italian baroque painter A. Galli Bibiena, while the mirrors in the Mirror Hall of the Primate’s Palace come from Venice, Rizzo added.

The Jewish population of Bratislava is small these days, but there have previously been vibrant communities in the city, living mostly in the residential area around the castle. The Jewish burial shrine that includes the tomb of Chatam Sófer and the graves of some other prominent rabbis and scholars is all that remains of what was once a much larger Jewish cemetery. But Renáta Cáková, the press manager of the Israeli Embassy in Bratislava, also pointed to a handful of buildings that have survived elsewhere: the only remaining synagogue in the Slovak capital on Heydukova Street; the Holocaust memorial on Rybné Square and the old Jewish quarters: Zámocká and Židovská Streets. There is also the Museum of Jewish Culture located on Židovská Street, which was opened in 1994 as part of the Slovak National Museum.

Other traditional minorities living in Bratislava have their own museums showcasing their cultures: Croatians have one in Devínska Nová Ves, Hungarians and Carpathian Germans both have museums on Žižkova Street. All of them operate under the Slovak National Museum. The Hungarian minority is the biggest minority in Slovakia and represents 8.5 percent of all inhabitants.

Bratislava also has a reputed connection with Slovenia, specifically at Devín Castle. Many Slovenians believe that the castle is connected with the Italian town of Duino, near Trieste, whose Slovene name is Devín and which has a large Slovenian population. Duino is also the setting for a popular Slovenian folk legend “Lepa Vida”.

The former Soviet Union has, of course, also had a significant impact on Bratislava, and there are numerous sites that recall the era of the mid-20th century. None is more obvious than the Slavín monument, which remembers the lives of the 6,845 Soviet soldiers who died during the liberation of Bratislava in April 1945, many of whom are buried in six mass and 278 individual graves. The monument is surrounded by a park containing trees from various parts of the former Soviet Union.

It is not the only military cemetery in the city. There is another near Kopčianska Street in Petržalka (open daily in the afternoons between April-October) with 331 graves of soldiers from Hungary, Austria, Germany, Romania, Poland, Russia and Italy. Čunovo, just outside of Bratislava, is where British visitors head to pay respects to the crew of a British aircraft shot down there while fighting the Nazis in the Second World War. Many Slovaks fought alongside the British during the conflict.

Slovakia’s main connection with Bulgaria is similarly tragic. In November 1966 a Bulgarian “Tabso” plane crashed in Sakrakopec, near Rača, killing all 82 of its passengers. Among the victims was the Bulgarian opera singer Jekaterina Popova and the writer Ramon Amador from Honduras. It was the worst plane tragedy in the former Czechoslovakia and is commemorated by 82 birch trees planted near the crash site. A memorial with stone cross and plaque was added in May 2010, as well as an inscription on one of the trees.

In June 2013, the Goethe Institute launched an internet-based application called “Spuren” (“Traces”), which examines the German heritage in Bratislava. Historians have identified several locations in and around the city that are linked in some way to famous personalities of German descent or can be associated to important events. Visitors can take a walk through Bratislava following the traces of its German past on their smart-phones.

Among these are a few sites that are largely unknown to the general public, including the former chocolate factory of the Stollwerck-family, the home of Segner family and the war cemetery which is part of Cintorín Ružinov (cemetery), where around 1,000 German soldiers, who died in the battles in and around Bratislava towards the end of the Second World War, are buried.

Many Slovaks have, of course, often gone in the opposite direction to the many immigrants who have made their home in Bratislava. There are pieces of the capital city scattered around the world. For instance, Bratislava is still the name of a small town in the south of Brazil established by Slovak emigrants many decades ago. Though you will not find any “pure” Slovaks there nowadays, some central European blood still runs through the veins of the town’s inhabitants. Many have blue eyes, according to Luiz Francisco Pandia Braconnot, the minister-counsellor at the Brazilian Embassy in Bratislava.

Many Slovak nationals and their descendants also live in the United States, particularly those displaced during the Second World War. An increasing number now return to Bratislava to investigate their family history.

“While there are not specific sites in Bratislava that attract visitors from the United States, many Americans trace their family roots to Slovakia,” said Matthew Miller from US Embassy in Bratislava. “In addition, many Americans are drawn to the rich history and culture of Bratislava and the beauty of the surrounding countryside.”

CROATIA, NORWAY AND OTHER NATIONS

Bratislava’s multicultural status is nowhere more apparent than along the so-called Presidential Alley in the gardens of the Presidential Palace, where every visiting foreign head of state is invited to plant a small tree. Rudolf Schuster started the tradition in 1999 and today there are 28 trees representing official visitors to the country. (The palace itself actually bears the name of a foreign national: Grassalkovich Palace is named after the Croatian aristocrat Antun Grassalkovich, according to Petra Sabin Wenzlová from the Croatian Embassy in Bratislava.)

Euroarboretum on Partizánska Lúka, in the popular Železná studienka area, follows a similar theme. When it is finished, it will include a representative tree from each nation in the European Union, along with an information panel about forestation there.

In addition, there are some streets in Bratislava bearing the names of nations: Česká (Czech), Vietnamská (Vietnamese), Bulharská (Bulgarian), Poľská (Polish), Bieloruská (Bielorus), Estónska (Estonian), Lotyšská (Latvian). It is difficult, however, to trace the reason behind these names. One exception, however, is the street named after the Norwegian writer Björnstjerne Björnson who was an advocate of Slovak national language and identity. Björnson’s Street (Björnsonova) near the so-called pyramid building of the Slovak Radio carries a small memorial plaque. There is also a courtyard named for him at the Slovak Philharmonic building which was reconstructed partly with funds from Norway. “Do you want me to tell a fairy tale about Bratislava? But the town itself is a tale,” said Björnson and Slovaks remember his positive attitude toward their country with gratitude.