THIS YEAR’S Nobel Peace Prize came as a surprise for many as the Norwegian Nobel Committee awarded the Organisation for the Prohibition of Chemical Weapons (OPCW) – an organisation rarely in the headlines – for its “extensive efforts to eliminate chemical weapons” on October 11. A trio of Slovaks are among those being honoured. 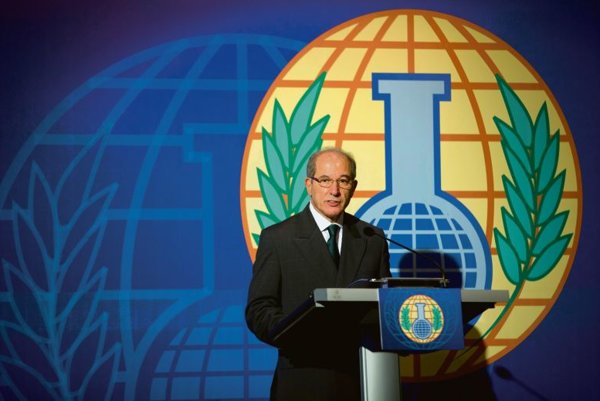 THIS YEAR’S Nobel Peace Prize came as a surprise for many as the Norwegian Nobel Committee awarded the Organisation for the Prohibition of Chemical Weapons (OPCW) – an organisation rarely in the headlines – for its “extensive efforts to eliminate chemical weapons” on October 11. A trio of Slovaks are among those being honoured.

Based in The Hague, OPCW employs 500 people from all over the world, including three Slovaks: Ditta Cigániková, a senior assistance and protection officer, Katarína Grolmusová, an armament inspector, and Marián Ružovič, an inspector.

“For me personally, it is a great honour and pleasure that our organisation’s work has been recognised after 16 years in operation,” Cigániková told the TASR newswire.

“This prize means even greater responsibility for us in fulfilling our duties under the Convention on the Prohibition of the Development, Production, Stockpiling and Use of Chemical Weapons and on their Destruction,” Cigániková added.

The Nobel committee cited the ongoing Syrian conflict as something that has “underlined the need to enhance the efforts to do away with such weapons”, according to the Nobel website.

Though there were some critical voices over awarding the prize to the OPCW, Slovak Ambassador to the Netherlands Jaroslav Chlebo, who also serves as permanent representative to the OPCW, considers them signs of ignorance. During the past 16 years the organisation has helped to destroy more than 83 percent of the world’s existing chemical weapons and has also implemented a very strict procedure for controlling the production and trade of dangerous chemical substances, which has contributed to peace in the world, he told The Slovak Spectator.

Slovaks inside the OPCW

Cigániková spoke of the fact that the OPCW is a smaller and more flexible organisation than the United Nations, where she previously worked. Her department deals with building the capacity of member states to protect themselves against chemical weapons. This means that it organises courses and trainings where participants from the OPCW member states improve their abilities for using protective and detection equipment, as well as decontamination techniques building their national system for protection against a chemical weapon attack, Cigániková said, as quoted by TASR.

She says she likes the work as part of an international and multicultural team, as reported by the Sme daily.

Another Slovak on that team, Ružovič, has been working for the OPCW for nine years. He has taken part in several chemical weapons inspections all over the world. Previously, he served in the Slovak army and was a member of the UN investigation team that searched for weapons of mass destruction in Iraq. Now he is preparing for the mission in Syria, Sme wrote.

Grolmusová joined the OPCW only in August. She got her job based on previous experience from the training centre in Zemianske Kostoľany, Trenčín Region. She told Sme that in addition to knowledge from chemistry and practice in her specialisation, she also has to be in good physical condition.

The OPCW was formed to enforce the Chemical Weapons Convention, a 1997 international treaty outlawing such arms. Currently it has 190 member state signatories that work together to prevent chemical weapons “from ever again being used for warfare, thereby strengthening international security”, according to the website.

Slovakia joined the OPCW in April 1997. It chaired the Executive Council of the OPCW between May 2008 and 2009, after it received unanimous support of the council’s member states. Chlebo appreciated the fact the country held the post since it is an activity which requires the ability to find compromises among several, often contradictory attitudes.

Employees of the technical secretariat of the OPCW appreciate the trainings as real chemicals are used, Chlebo said.

Thanks to these activities and the approach to tasks pertaining to the OPCW membership, the international partners see Slovakia “as a responsible and reliable member of this organisation”, Chlebo said.