WILL he or won’t he? At the moment, the question that matters to the Slovak public whenever the presidential election is mentioned is whether Prime Minister Robert Fico will throw his hat into the ring. Much like other political parties, Fico’s Smer have put off strategising for the presidential vote until after next month’s regional elections. 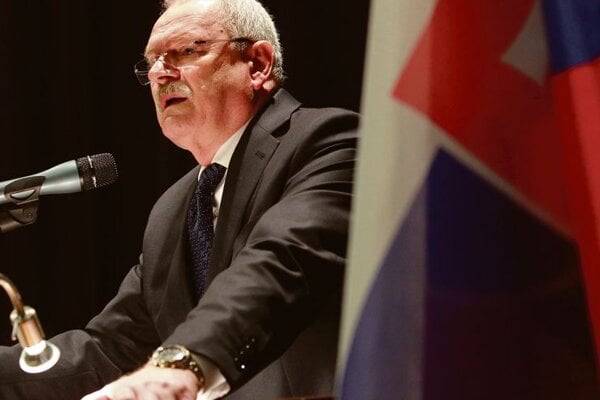 WILL he or won’t he? At the moment, the question that matters to the Slovak public whenever the presidential election is mentioned is whether Prime Minister Robert Fico will throw his hat into the ring. Much like other political parties, Fico’s Smer have put off strategising for the presidential vote until after next month’s regional elections.

Smer originally promised to start talks about their candidate this autumn, but in the second half of October it was clear that they will not discuss the matter prior to the November 9 regional polls. The party maintains they want to present their candidate at the party congress in December 2013, the Sme daily reported.

Fico remains the most probable candidate in the view of some observers, although they admit the party will have serious problems replacing him in the prime ministerial post if he decides to run. Other names from within the party mentioned as possible Smer candidates are Fico’s right hand, Interior Minister Robert Kaliňák, and Foreign Minister Miroslav Lajčák. The latter has however also not ruled out a bid to become UN Secretary General in 2016.
Smer officials have declined to comment on any of these possibilities.

Meanwhile on the right side of the political spectrum, some parties have started making up their minds about whom to support in the presidential race. Even so, it is still not clear whether the three parties of the People’s Platform opposition group will stand united behind one candidate. While Most-Híd, and recently also the Christian Democratic Movement (KDH) named Pavol Hrušovský, former speaker of parliament and a high-ranking KDH member, as their official candidate, the Slovak Democratic and Christian Union (SDKÚ) postponed the final decision until after the regional elections.

Voices from within the party however suggest that SDKÚ is split about whom to back as their candidate. While people around chairman Pavol Frešo would give the chance to Hrušovský, others consider him a weak candidate. Most recently, MP Miroslav Beblavý spoke up against supporting the KDH candidate, saying he stands no chance in the election.

The KDH, whose council voted on October 12 to support Hrušovský as its presidential candidate with 75 out of 91 votes, is however also not completely united about its now official candidate.
“I am convinced it is possible to defeat the candidate of Smer,” Hrušovský told Sme following the council session.

Part of the movement’s board wanted to endorse Ján Čarnogurský, a founding member and former chairman of KDH, who is running as an independent candidate in the presidential race. Board members Július Brocka and Peter Bobula preferred him to Hrušovský, according to Sme.

In response, Čarnogurský then made a gesture on October 11, before the council session, and quit the movement “to set the hands of the council free” in the selection of their candidate.

“One political party cannot have two candidates,” Čarnogurský wrote about his decision. “It wouldn’t be honest.”

His supporters within the KDH however did not switch to Hrušovský in response to the gesture. MP Alojz Přidal forecasts Hrušovský’s failure in the election, which he believes will lead into a split in the movement, since some members will still vote for Čarnogurský.

Hrušovský however believes he can still garner the official support of SDKÚ for his candidacy and succeed in the election, he told Sme. He is also going to collect signatures as non-partisan candidates do. A candidate needs 15,000 signatures to run as an independent candidate. Hrušovský will start his petition after the regional elections.

A public opinion poll published shortly before the KDH council session however confirms what the previous polls have been showing: Hrušovský enjoys wider public support than Čarnogurský.

The MVK polling agency’s poll that measured public opinion at the turn of October 2013 shows Fico, who still wins with a great advantage of almost 38 percent of the vote, would meet another former KDH member, Radoslav Procházka, in the second round of the election. Procházka received more than 18 percent of the vote, followed closely by Hrušovský with 17.6 percent.

Čarnogurský would get 8.9 percent of the vote, after civic candidate and philanthropist Andrej Kiska with 13.2 percent. Freedom and Solidarity (SaS) MP Peter Osuský would get 4.4 percent. Meanwhile, as many as 26.2 percent of all the respondents either would not vote or had not decided who to vote for, the poll showed.

The numbers were considerably different in another poll. In July 2013, the Focus agency put Fico high above all other candidates with over 36 percent of the vote, but according to its poll’s results Fico would encounter Kiska (almost 19 percent) in the second round of the election, followed by Hrušovský (13.4 percent). The support for Procházka and Čarnogurský in that poll was between 5 and 6 percent.

Some other candidates, not featured in the polls, have emerged in the presidential race. Milan Kňažko, an actor and one of the tribunes of the 1989 revolution, is expected to announce his candidacy, according to Sme.

Jozef Behýl, known in the non-governmental sector, is collecting signatures under his candidacy too. So is Ľubica Blašková, the secretary of the Russian-Slovak Society.

Playing with the date?

However many candidates come forward and whatever happens among right-leaning parties, the election is going nowhere without Smer. Not only when deciding about its presidential candidate, but also when deciding on the actual date of the election. The decision is up to Speaker of Parliament Pavol Paška of Smer.

If no candidate receives more than 50 percent of all the registered votes in the election, a second round of the election is held, a run-off between the two candidates with the highest score in the first round.

The election must take place at least 60 days before the term of the incumbent president elapses, which is June 15, 2014. In Slovakia, elections are traditionally held on Saturdays, which means the latest possible date for the first round of the election is April 12, 2014.

Smer might want to push the first round of the elections to the latest possible date, Sme reported, quoting a source from the Smer leadership.

In the spring months, there are several non-political factors that can influence the turnout and the result of the election. Easter time as well as spring holidays are the primary obstacle. The latter stretches over three weeks between February 15 and March 9, with Slovakia’s regions taking turns each week. The end of March is also the deadline for citizens to submit their tax returns and pay taxes, which does not improve people’s mood toward the ruling party, Sme noted.