WHILE the government of Robert Fico’s Smer party has promoted its 2014 budget plan with catchphrases touting it as a post-crisis budget of social reconciliation, responsible but based on solidarity, the opposition is calling the plan, which the Slovak cabinet approved on October 10, a wasted chance, risky, a blow to free enterprise and part of Fico’s campaign for next year’s presidential election. 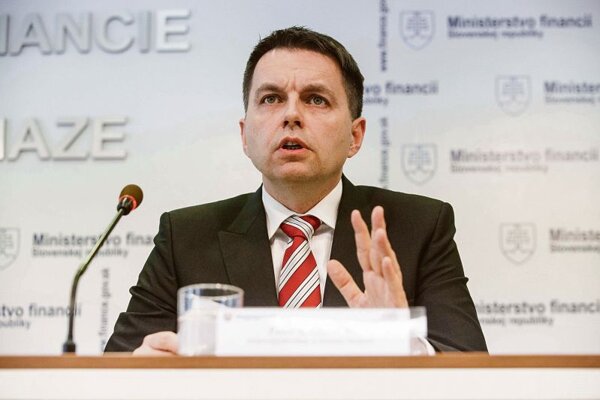 WHILE the government of Robert Fico’s Smer party has promoted its 2014 budget plan with catchphrases touting it as a post-crisis budget of social reconciliation, responsible but based on solidarity, the opposition is calling the plan, which the Slovak cabinet approved on October 10, a wasted chance, risky, a blow to free enterprise and part of Fico’s campaign for next year’s presidential election.

One of the most disputed items in the draft budget, which estimates a 2.83 percent deficit, down from this year’s 2.98 percent, has been the introduction of tax licenses to be collected from limited liability or joint stock companies regardless of whether or not they make a profit.

While Fico said he views the introduction of licenses as a preventive measure compensated by the planned reduction of corporate taxes from 23 to 22 percent, employers and market watchers warned of its potential negative impact on small and medium-sized companies. The media has reminded the prime minister of his promise from earlier this year that his government will not introduce higher or new taxes. Analysts have also said that the planned tax cut, while positive, is still too minor to compensate for the eventual tax licenses.

“Decreasing the corporate tax rate is a move in the right direction, however the proposed rate is still far from the original 19 percent rate,” Ján Dinga, analyst with the Institute of Economic and Social Studies (INESS), told The Slovak Spectator. “The problem is that the government plans to compensate for this drop through the introduction of tax licenses.”

In practice it means that the government plans to collect from the business sector even more resources than before, Dinga said. According to him, the tax licenses will affect the low income or loss-making firms the most and thus have a negative impact mainly on small and medium-sized companies.

The draft budget, which the cabinet has advanced to parliament, estimates the deficit at €3.39 billion next year, with revenues standing at €13.84 billion and spending planned at €17.22 billion. Along with the licenses for trade companies, the draft also looks to cut the corporate income tax rate from 23 percent to 22 percent. The cabinet expects these measures to have a positive impact on the budget estimates of an additional €84.2 million, while a special levy applied in regulated industries is expected to bring in €78.7 million. Given the dominance of Fico’s Smer party, it seems likely to pass.

“The main risk of the state budget is the uncertain developments in the eurozone, which has a significant impact on the performance of our economy and filling the tax purse,” Dinga of INESS said. “The government thus should have a crisis scenario prepared for budgeting in case public revenues will not develop in line with expectations.”

When defending the concept of tax licenses, Finance Minister Peter Kažimír cited Austria, where limited liability companies pay for licenses at €1,750 annually. The minister is proposing licenses of €1,000 per enterprise. Yet, it is possible that the payments for different types of companies will be differentiated.

“We are determined to deliver this type of tool,” Kažimír said, as quoted by the SITA newswire.

The reason why the government opted for this tool is the development of companies meeting their tax obligations, said Kažimír. Over the past four years more than 60 percent of corporate entities reported zero tax duty, while the number of firms keeps growing, according to the minister, who suggested that the measure is to “improve the predictability of revenues and motivate positive tax duties”.

The new tax licenses are likely to become valid as of the spring of 2015, however the minister said that the details of the measure are to be clarified after negotiations with the employers. Tax licensing fees would be tax deductible.

“We are not talking about a sum which should liquidate someone,” Kažimír said, as quoted by SITA.
Yet, newly established firms will most probably be exempt from this tax duty just like companies in default or insolvency will have the option to move the payment to the next tax period. The Finance Ministry hopes to collect €84.2 million more on tax licenses than the costs of slashing corporate taxes to 22 percent.

While Martin Hošták of the National Union of Employers (RÚZ), an interest organisation of employers, told The Slovak Spectator that though he views the reduction of corporate tax positively, it also should be viewed in the context of introduction of the new tax. Hošták said that it is not a license and suggested that it should be called by what it actually is: “it is de facto a new tax”.

“Thus in this context we no longer view the proposed changes in the area of income taxes very positively,” Hošták said. “Despite the fact that we always welcome tax reductions, in the context of the introduction of the new tax we view it quite problematically, mainly because the discussion is focusing only on the income part of the budget, but a debate on the consolidation of the spending part is missing.”

According to Hošták, the government so far has not carried out any audit, which would look at what spending the state needs and what is unnecessary. Hošták said that in Slovakia there are more than 800 different budgetary organisations and “so far no complex evaluation has been carried out, while the citizens do not even know the activities of most of these organisations”.

Rastislav Machunka of another employer interest organisation, the Federation of Employers’ Associations (AZZZ), said that cutting corporate income tax by 1 percentage point is positive but insufficient.

“If the rate returns under the 20-percent limit, it would fundamentally improve the business environment and competitiveness,” Machunka told The Slovak Spectator.

According to Machunka, the introduction of tax licenses has one positive effect: the Finance Ministry conditions it by lowering the corporate income tax by 1 percentage point. “Of course this measure has no other positives and in itself it would also mean further worsening of the business environment,” he said.

When introducing the new budget, Fico said it marks the end of the era of freezing salaries, while explaining that his government is planning a number of measures to get the money to cover this thaw.
Wages for constitutional representatives will remain frozen, which Fico sees as an expression of solidarity.

The thaw will bring an additional €16 per month on average to the wages of 340,000 employees in public administration, which represents a 2-percent pay hike, based on an agreement between the state and trade unions, SITA reported.

About 100,000 teachers at regional schools and educators at universities will see their wages increase by 5 percent, which would add an approximate €42 per month to their pay, based on negotiations between teachers’ unions and Kažimír. Pouring more money into the purses of teachers and non-teaching employees of the education sector will require an extra €80 million from the state budget, according to SITA.

In addition to the €100 million, which the taxpayers will have to pay for the wage hike, the main problem is the fact that the government is flatly increasing the salaries by a fixed amount, said Dinga.

“Wages of those public servants who are performing well for the benefit of their customers, the taxpayers, should be increased,” Dinga said, adding that this hike should be financed from the cancelled redundant jobs which in case of a “thorough audit in the state administration” would be easy to find.

The number of employees of Sociálna Poisťovňa, the social security provider, has dropped over the past three years by 14 percent without this influencing the company’s operation, Dinga noted.

The government aspires to trim the public finance deficit in the upcoming years, and for 2014 plans a deficit at 2.83 percent, down from this year’s 2.98 percent. In 2015, the deficit is planned at 2.57 percent, while in 2016 it should be a mere 1.50 percent of GDP, if the draft state budget becomes a reality.

Though the deficit in 2014 will continue dropping, there will nevertheless be a “mild structural expansion at 0.2 percent of the GDP”, and thus Slovakia is applying for the so-called investment exemption in 2014, which would help the country to meet the rules of the Stability and Growth Pact, Martin Filko, chief economist and director of the Financial Policy Institute attached to the Finance Ministry, wrote in a memo sent to the media.

Kažimír is to submit, along with the budget, Slovakia’s application for the exemption so that its spending on co-financing of the EU funding is not included in the structural deficit of the country in 2014. The structural deficit is the difference between the revenues and the spending of the public administration cleaned of one-time effects, the Sme daily reported on October 17.

In order to be eligible for the exemption, the country’s deficit should still linger under 3 percent of the GDP while the debt should not exceed 60 percent of the GDP. The growth of the GDP should be either negative or deeply under its potential, according to the official memo sent by Filko.

Jana Liptáková contributed to the report